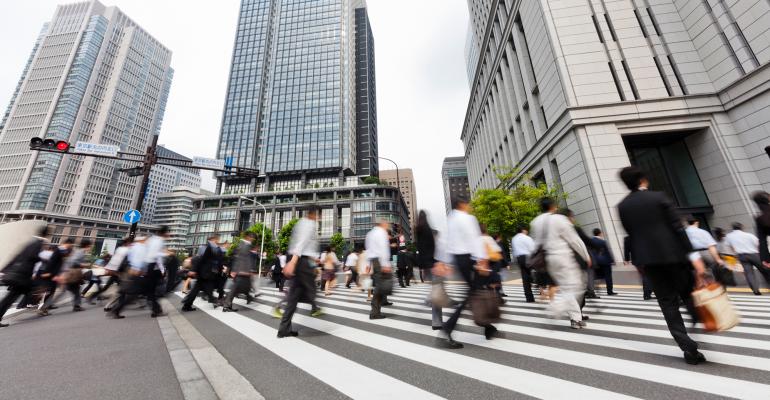 Canada’s BentallGreenOak plans to invest billions of dollars in Japanese office real estate over the next three years.

(Bloomberg)—Real estate investor BentallGreenOak is wagering billions of dollars that Japanese workers will return to the office after the pandemic.

The unit of Canada’s Sun Life Financial Inc. plans to double staff and invest $10 billion in Japan over the next two to three years, of which as much as 70% may go into office buildings in the country’s major business districts, said Chief Executive Officer Sonny Kalsi.

“We don’t think that work from home is going to be a big long-term trend in Asia overall and in Japan specifically,” Kalsi said in an interview. “That’s part of the reason we are bullish on Japanese offices -- more so than any other market.”

Like their peers around the world, Japanese companies are grappling with how to use office space once the coronavirus is defeated. Some including Hitachi Ltd. and Nomura Holdings Inc. are embracing flexibility, while others like SBI Holdings Inc. want employees back on-site to ensure productivity.

Investment in commercial real estate in Tokyo has surged this year, contrasting with declines in New York and Paris, according to Jones Lang LaSalle Inc. BentallGreenOak bought properties worth 100 billion yen ($968 million) earlier this year, and is in talks on a few deals worth several hundred millions of dollars each, CEO Kalsi said.

Offices in Tokyo have emptied during the pandemic, even as many workers continue to commute in a country where coronavirus cases remain lower than in Europe and the U.S. Vacancies in the city surged to a four-year high last month, according to real estate brokerage Miki Shoji Co.

Yet Japan’s business culture suggests people will prefer to work together in person once the pandemic subsides, underpinning the need for offices, said Kalsi, who lived in Tokyo from 1998 to 2006. “I think Japanese companies are more traditional in how they are run and managed,” he said.

Demand will also be driven by the tendency for Japanese homes to be less suited for remote work than those in the U.S., in part because of limited space, Kalsi said. During a state of emergency in April, 55% of teleworking employees in Japan were doing their jobs at the dining table, according to a survey by Recruit Sumai Co.

BentallGreenOak is likely to double the number of Tokyo employees from the current 21 over the next two to three years to handle more large transactions, Kalsi said. It will seek deals worth 10 billion yen to 100 billion yen each, larger than the past target range, because Japanese firms’ real estate divestitures and other factors have put bigger, more attractive assets on the market, he said.

Aside from offices, BentallGreenOak may invest about $1 billion in hotels in Japan’s major cities and tourist spots after prices dropped sharply during the pandemic, Kalsi said. It is also interested in logistics and data centers, he added.

“After Covid, there are going to be so many people looking forward to travelling again,” he said.