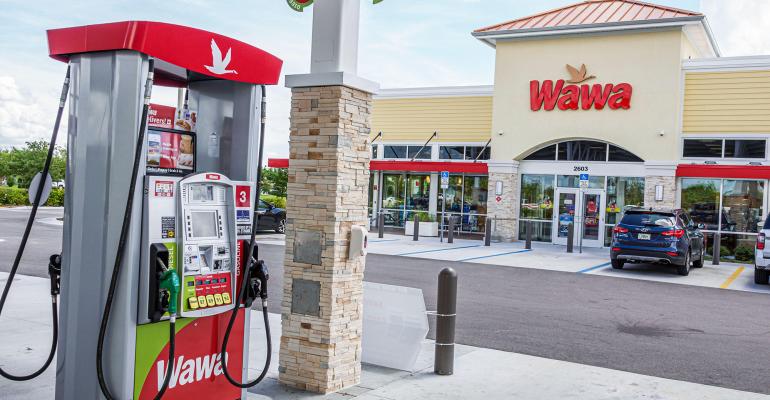 Net Lease Investors Fill Up on C-stores and Gas Stations

Earlier this month, Wawa Inc. announced that it planned to expand its footprint of convenience stores into southern and coastal Georgia—a move that surprised no one. The Pennsylvania-based company, which owns and operates a chain of more than 965 c-stores (more than 75 percent sell fuel), is already making waves in Florida, particularly the panhandle.

With a store portfolio currently located in Pennsylvania, New Jersey, Delaware, Maryland, Virginia and Washington, D.C., Wawa wants to operate roughly 1,800 locations by 2030. Eventually, the chain hopes to open as many as 100 c-stores annually.

Wawa is known for its offerings of branded fresh food and beverages such as built-to-order hoagies, freshly brewed coffee, hot breakfast sandwiches, made-to-order specialty beverages and an assortment of soups and snacks.

“I’ve been in this business for 21 years and though c-stores/gas stations have always been an attractive sector for a variety of net lease buyers, the buyer pool has really expanded over the past few years,” Wolfe says. “The very legit concerns around environmental contamination that made buyers skittish before are not an issue today given the stringent national requirements regarding fuel tanks.”

Moreover, the 100 percent bonus depreciation deduction for qualified “retail motor fuel outlets” through the Tax Cuts and Jobs Act of 2017 poured gasoline on net lease investor demand for c-stores and gas stations. Because the 100 percent bonus depreciation will be available only through the end of 2022 before it starts to incrementally decrease, net lease buyers are in a frenzy to close deals.

Net lease experts anticipate that demand for c-stores with gas stations will decrease when 100 percent bonus depreciation ends. However, no one expects the sector to suffer a big hit.

“Even before 100 percent bonus depreciation was put in place, these properties were still selling aggressively,” notes Spencer Henderson, a director in the San Francisco office of B+E Net Lease, a brokerage that specializes in net lease transaction and 1031 exchanges. The firm has tracked more than 290 gas station sales so far this year.

Even the threat of electric vehicles (EVs) has done little to dampen investor interest in c-stores that sell fuel, Wolfe says. “When we take these assets to market, we get multiple offers within days. Net lease buyers who are investing in c-stores that have a fuel component believe that the tenants will adapt and find a way to benefit from the proliferation of EVs and EV charging.”

There are 148,026 convenience stores in the U.S., according to the 2022 Convenience Store News (CSN) Industry Report. That number represents a decline of 2,248 stores from the previous year.

Independent retailers accounted for the decrease; over the past two years, independent c-stores owners and operators shuttered nearly 6,000 stores. Chain stores, meanwhile, increased their store count by 612 locations in 2021. They now comprise 39.6 percent of the industry’s total stores.

Most c-stores in the U.S. sell fuel—about 116,600 (78.8 percent) in 2021, a decrease of 2.1 percent. The average c-store has a sales mix of 60/40 between motor fuels and in-store sales, respectively. While the gross profit dollar mix tilted slightly toward motor fuels, in-store still generated more gross profits at a 59/41 ratio in 2021, according to CSN.

Most key components of the U.S. c-store business shined last year, according to CSN. Total sales grew by nearly 25 percent to $663.5 billion. Fuel revenue was up 40 percent, in-store sales (including food service) increased 6.2 percent to reach a record high, and food service sales alone were up more than 20 percent after suffering a 10 percent pandemic-induced decline in 2020.

Food service sales took center stage in 2021. The category, which includes prepared food and hot, cold, and frozen dispensed beverages, increased by 20.5 percent to $43.2 billion in total sales. Consumers gravitated toward c-stores for grab-and-go meals because it can be faster than a drive-thru, is located along their commute and they can purchase gas at the same time.

Net lease investors are interested in c-stores today because these stores have upped their game, especially when it comes to food service and facility design and attractiveness.

“The c-store industry has really changed,” says Wolfe. “If you walk into stores that are less than five years old, you’ll see that they’re nice and clean and offer decent food, not shriveled up hotdogs.”

C-stores and gas stations offer more than strong credit and long-term leases, experts note. Because of the nature of the business, the underlying real estate tends to be particularly well-located. More often than not, these properties are situated on larger than average land parcels at intersections and feature easy in-and-out for drivers.

Investor demand is largely driven by 1031 exchange investors who are trading out of other property types and looking for steady income and strong credit tenants, according to Wolfe. Because the majority of c-store and gas station properties are backed by strong credit, cap rates for these assets are among the lowest in the net lease industry. They typically trade in the low four percent range.

“C-stores and gas stations are absolutely among the leaders in cap rates for properties ranging from $3 million to $10 million,” Wolfe says. “The lowest cap rates are Chick-Fil-A and McDonald's, and the next tier is c-stores.”

“We had six offers very quickly upon taking to market,” Wolfe says. “The buyer was attracted to both the location and credit quality of Wawa.”

Threats to c-stores and gas stations

The growing popularity of EVs puts the future of gas stations in doubt—at least according to Boston Consulting Group (BCG). The firm estimates that as much as 80 percent of the fuel retail market could be unprofitable within 15 years, assuming widespread EV adoption. In-store sales alone would not be enough to support the outlets.

There’s a lot of support for EVs. President Biden aims for half of new vehicles sold in the U.S. to be electric, fuel cell or hybrids by 2030. Fourteen states and Washington, D.C. have adopted California’s regulations that require a certain number of zero-emissions vehicles sales per year and for all cars sold to be zero emission by 2035.

Over the next 15 years, 2035, BCG expects gasoline demand for light-duty vehicles to dive by 50 percent to 70 percent. That would trigger a decline of 30 percent to 50 percent for the total average throughput for fuel stations (as measured in liters of gasoline and diesel sold). With fewer people visiting the pump, the c-store portion of the business would likely struggle since people typically make in-store purchases while they’re filling up.

“EVs are undoubtably an important part of our future, but there is debate about the timeline for adoption,” says Jeff Lenard, vice president of strategic industry initiatives for the National Association of Convenience Stores (NACS).

Most industry experts contend that BCG’s predictions for fuel retailers are unreasonably dire. Even more believe that such a scenario is extremely unlikely, given the number of EVs on the road now, consumer sentiment toward EVs, charging infrastructure limitations and the average number of years a vehicle stays on the road.

“EVs are all we read about and hear about, so it makes sense to wonder why we’re adding all these gas stations,” Wolfe says. “But we are still decades away from mass adoption of EVs, and these businesses make their money on the c-store component, not the gas. The brands that are looking to gain market share are really stressing c-store element. Even if EVs take off, it’s not the death knell people think it will be.”