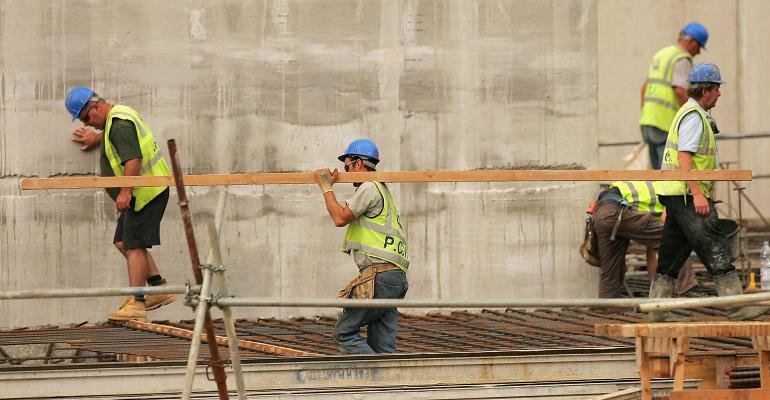 Mutual and exchange-traded funds dedicated to building and upgrading roads, bridges, airports and other projects attracted more than $450 million from November through January.

Related: Are We Entering the Golden Age of Infrastructure?

Mutual and exchange-traded funds dedicated to building and upgrading roads, bridges, airports and other projects attracted more than $450 million from November through January, the biggest three-month period in almost two years, according to Morningstar Inc. The inflows reversed redemptions during 15 of the 16 months prior to last year’s fourth quarter.

Interest in the funds has increased with Trump proposing $1 trillion in spending during the next decade on crumbling and outdated infrastructure. While investments have historically been concentrated privately, some mutual fund providers are offering access to the industry through bundles of shares concentrated on businesses that run everything from airports to cell phone towers. And the number of offerings is likely to rise, according to Morningstar’s Tayfun Icten.

“The new product introduction will be pretty healthy in this particular area going forward,” Icten, an analyst who focuses on infrastructure mutual funds, said in a telephone interview. The Lazard Global Listed Infrastructure Portfolio is the largest mutual fund in Morningstar’s infrastructure category and the top performer for the last three- and five-year periods. Inflows from November through January to the $3.6 billion fund exceeded $230 million.

For a story on private equity funds devoted to infrastructure, click here

Net inflows into the fund category overall slowed in January, after some of the funds trailed the broader market’s fourth-quarter gains and hopes dimmed for a quick U.S. stimulus boost under the new administration, Icten said.

Until about a decade ago, U.S. infrastructure investing opportunities were largely limited to private equity funds that were neither liquid nor available to small players. The other alternative was municipal bond funds, which usually offered low returns in exchange for tax benefits.

Then money managers took a cue from the real estate industry, assembling retail funds of companies with rent-like revenue streams such as rails, pipelines, utilities or cellphone towers, according to Manoj Patel, co-manager of the $3.5 billion Deutsche Global Infrastructure Fund. The focus on long-term cash flow distinguishes infrastructure from the construction sector, which may benefit more directly from government stimulus spending, but for shorter periods, he said.

Investors who buy mutual funds and ETFs to bet on a surge in U.S. infrastructure spending will probably have to wait to see the benefits of a boom. Any Trump-era projects could take years to construct before revenue flows to popular fund holdings such as CSX or power company NextEra Energy Inc.

“This is a long-term, focused strategy on companies with structurally more stable and predictable cash flows,” Patel said in a telephone interview. The largest holdings in his fund, which averaged annual returns of almost 7 percent as of Feb. 10 since its June 2008 inception, include Kinder Morgan Inc., American Tower Corp. and Sempra Energy.

The market capitalization of the Guggenheim S&P High Income Infrastructure ETF has jumped more than 350 percent since Trump’s election to almost $29 million as of Feb. 13 as more investors noticed its performance, according to William Belden, head of Guggenheim’s ETFs development. Stocks in the ETF, which are heavily energy and pipeline weighted, did well in 2016 and its returns topped 50 percent over the last year.

The $289 million DoubleLine Infrastructure Income Fund, launched in April, is one of the few in the category that holds fixed-income debt such as asset-backed securities for aircraft and rail cars. It’s returned about 2.2 percent since inception as of Feb. 10. Since the election on Nov. 8 it’s lost about 1.3 percent, as with other intermediate-term bond funds that suffered as interest rates rose. DoubleLine analyst Loren Fleckenstein declined to comment.

Investors betting on the funds should be wary of exposure to interest rate, energy or currency risks that can add volatility, according to Icten. Most publicly-traded infrastructure funds also invest globally, which could limit the potential impact of U.S. stimulus policies to gains.