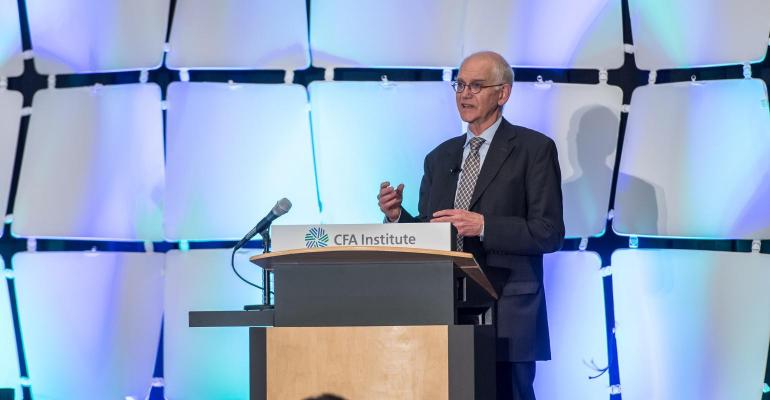 Steve Lyndenberg speaking at the CFA Institute Conference in Montreal in 2016.
Investment>Mutual Funds

He Helped Start the ESG Movement. Now He Wants to Fix It

(Bloomberg Markets) -- Steve Lydenberg’s passion for social change was inspired by anti-Vietnam War demonstrations, consumer boycotts, and the movement to divest from apartheid South Africa. But he didn’t take to the streets. Instead, Lydenberg turned to the world of finance to help catalyze societal change.

Related: Will SRI Evolve Beyond a Niche Market?

In 1990 he co-founded KLD Research & Analytics, the first firm to conduct environmental, social, and governance analysis of S&P 500 Index companies and sell that research to Wall Street. While there, he co-created the first socially responsible investing index of U.S. companies, now called the MSCI KLD 400 Social Index. But, as investor appetite for ESG data and sustainable investments has grown, Lydenberg says ESG has fallen short in addressing systemic issues such as inequality and climate change. So in 2015, he co-founded The Investment Integration Project, known as TIIP, to encourage what it calls ­system-level investing. Lydenberg, who turns 76 this month, spoke with Bloomberg Markets in August. The interview has been edited for length and clarity.

SAIJEL KISHAN: How did you get into ESG? Did you have a ­background in finance?

STEVE LYDENBERG: None whatsoever. My only advanced degree is in theater arts and playwriting from Cornell. I was in New York City in the mid-1970s for the theater scene, to see if I could get my plays put on. I didn’t want to wait on tables, so I thought, “Let me do some interesting research,” because I like research. I was concerned about the war in Vietnam and the economy, and I basically stumbled on the Council on Economic Priorities. They were one of the first organizations that was trying to rate and rank companies on social and environmental issues. It was aimed primarily at consumers, and the consumer-boycott theme at the time was very strong. I worked for them for 12 years before I decided that this was a career.

SK: How did you make the jump to finance?

SL: I became fascinated with finance and what it could do. The financial community obviously has great affinity for figures, but it loves a story as well. Many of the charts and figures ­economists and the financial industry like are essentially stories about the future.

This was also a time of a lot of street demonstrations and really high polarity of protests. There was a fair amount of violence, too. So the use of investment tools was interesting to me, as it seemed to me a more orderly way of bringing these issues to, one, the public’s attention, and two, to actual transformative change.

SK: What got you thinking about systems-level investing?

SL: We had reached a tipping point where the mainstream said, “Yes, of course, social and environmental issues can be material to individual security selection and portfolio risk.” At KLD we were involved in marketing that data. By, let’s say, 2010 it was clear there was a market. Bloomberg was including the data on their terminals.

But, in a disjointed way at the same time, the major issues were really coming to the fore and getting worse and worse. Climate change, income inequality. All this recognition of the value of ESG data and its integration into valuation models and portfolio risk management, that wasn’t really making a difference when it came to the most serious issues of the day.

SK: What event caused you to realize that ESG needed to evolve and that systems-level investing was needed?

SL: The launch of the United Nations’ Sustainable Development Goals. Those are systemic issues. Companies and the financial community were saying they were aligned with them or wanted to be aligned with them. But it wasn’t clear what that meant. If all they were talking about was cleaning up portfolios, it wasn’t clear how cleaning up portfolios as alignment was going to get you to the SDGs.

SL: Let me be clear here, because I had a little trouble myself in coming to this formulation. I don’t believe systems-level investing as we see it replaces ESG integration, security evaluation, and portfolio risk management. They are incredibly important. But there is a certain class of risk that is systemic risk that investors are impacted by and requires an additional set of tools and way of thinking.

SK: What are the characteristics of a systems-level issue?

SL: First of all, they involve global issues. Second, they are destabilizing in some fundamental way. And third, they’re very hard to predict the outcomes of, and one’s ability to impact them. The simplest way of saying what a systems-level issue is for an investor, just as a litmus test, is: Does it impact your assets across all asset classes? And the implication of that is, you need another set of tools to deal with these.

SK: What are those tools?

SL: Let me give you four examples. One is what we call self-­organization. It’s the same as collaboration, basically entering a collaborative enterprise like Climate Action 100+, which has a systemic view of a problem and how it can be addressed. Collaboration doesn’t come easily and naturally in the financial world; the model is competitiveness. Competitive is good if you are only looking at your portfolio or a given security. It’s what makes for discipline in the marketplace. But if you’re going to deal with a complex, global issue, then collaboration becomes just essential. It’s so much easier now than it was even five years ago. Coalitions are being formed all the time.

Second is what we call interconnectedness. The easiest way to think of it is the sharing of data on a pre-competitive basis. And again, the financial industry is not used to sharing data; it’s closely held and the basis of your competitive advantage. One example is Calpers [California Public Employees’ Retirement System] and Calstrs [California State Teachers’ Retirement System] have this database for diversity on boards of directors. So if a company wants to hire, make offers to directors on diversity issues, there’s a database. Another example in the area of labor relations is the Workforce Disclosure Initiative, now part of [U.K. responsible investing nonprofit] ShareAction. It’s aimed at standardizing and ultimately mandating disclosure on workforce employment practices so everybody is on the same level. Employee relations is a great tool for distinguishing which company is going to do better than another company. Sharing data is a way that everybody can start from the same point. The implication is those standards are going to be used not just to pick stocks, but to engage. There is a public good of having that data out there.

The third is public policy. Investors have been basically told that unless it directly relates to some technical part of how the financial industry runs, how derivatives are measured, they should stay out of any social and environmental policy issues. Public policy includes things like subsidizing an industry such as renewable energy and setting tax advantages to encourage industries that are growing. You will then be able to pick and choose which companies will win, but you will have a public policy that supports the whole industry.

Finally, the fourth one is what we call evaluations of intangibles. Clearly certain social and environmental systems have value, and some of that value is very hard to price. There’s a lot of stirring about how investors can support biodiversity, but putting a price on biodiversity is very hard. You can talk about what is the cost of the loss of pollinators. You can talk about certain kinds of losses, and that is a worthwhile thing to do. But in the end, the commitment is not just to everything that you can price. The commitment is to the whole system. The complex, interrelated, ­biodiverse system. It’s a situation where the whole is essentially worth more than the parts. What’s the value of a forest? It’s got a value as a whole, but if you cut it up into little pieces, it’s not equivalent to the whole. And current practice when confronted with that issue is “I can’t really quantify those things, so I’m going to ignore it.” And now this whole movement around capitals—natural capital, human capital, social capital—reflects that.

SK: How can investors address that?

SL: One way of addressing the complexity issue is through scenarios. The Task Force on Climate-Related Financial Disclosures deserves a great deal of credit for prompting investors, as well as corporations, to engage in scenario analysis when it comes to climate change. [Michael Bloomberg, founder and chairman of Bloomberg Markets parent Bloomberg LP, serves as chairman of the task force.] The point of a scenario is that it takes you a little bit away from jumping immediately to a simple solution that you think will work for everything in a complex system, and allows you to prepare yourself for a range of possibilities. By our definition, a systems-level issue is one of great uncertainty. So scenarios are very helpful. An example of that is sea-level rise. Scientists can predict the feet of sea-level rise but only within a range. So we don’t know exactly how fast it’s going to rise, how fast the polar ice caps are going to melt. We think maybe 3 feet is a reasonable number for sea-level rise by the end of the century, but it could be 10 feet in an extreme scenario. So you prepare yourself as an investor, even if you can’t apply it immediately.

SL: The New Zealand Superannuation Fund, for one. The prerequisite of a systems-level investor is a commitment that manifests in an investment-belief statement specifically referring to ­systems-level investing. New Zealand Super says that it believes climate change is one of the fund’s most critical investment risks and opportunities. That lays it out there. And they also say they believe that climate change is a market and policy failure and that carbon is not efficiently priced. So they tie it to policy failure. These are strong statements.

Secondly, they say climate is a risk across all asset classes, a risk that they won’t be rewarded for. These are all from New Zealand Super’s climate change report 2020. On the public equity side, they have very judiciously and systematically reduced their exposure to carbon. They’re doing this slowly, because they want to make sure that they’re not going to adversely impact performance. Big picture is they look across all their asset classes, they do scenarios, they do active engagement and proxy voting. They are part of coalitions and data-sharing efforts. Everything started with equities and now is spreading out more systematically into other areas such as sovereign debt. This is fascinating to me, that engagement is now engagement with government on systemic issues.

SK: How do you decompress after dealing with overwhelming issues like climate change?

SL: I read a lot of mystery and detective novels. That’s my idea of relaxing. And my idea of a summer vacation is sitting by the lake and reading. I work intensely, and so I believe in long vacations to recharge.

Kishan reports on ESG and climate for Bloomberg News in New York.