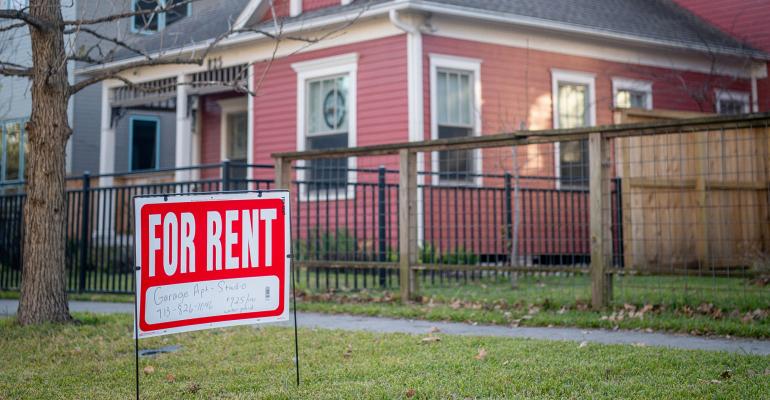 Why Is the Cost of Rent Going Up? Ask the Fed: Lisa Abramowicz

Unless the supply of apartments and homes increases, those rents will stay elevated and even rise barring some significant economic downturn.

(Bloomberg Opinion) -- The Federal Reserve just raised interest rates the most since 1994 to help dampen inflation, but its policies may end up fueling, not crimping, a chief component of consumer price increases: the cost of rent.

Here’s why: As mortgage rates surge to an average of nearly 6% and home values keep climbing, all-in payments are rising by hundreds of dollars a month. A growing number of US consumers are getting priced out of homeownership. Instead of buying, more of them feel financially compelled to rent, which drives up that price as well.

“Mortgage payments have surpassed rents on many homes,” Redfin deputy chief economist Taylor Marr said earlier this year. “While renting has become more expensive, it is now more attractive than buying for many Americans this year.”

Redfin data show that median US rents rose 15% year over year in May, surging past a record $2,000, with asking rents surging nearly 50% in Austin, Texas, and more than 30% in Cincinnati, Seattle and Nashville. Unless the supply of apartments and homes increases, those rents will stay elevated and even rise barring some significant economic downturn that causes people to find roommates and live in less space.

A big part of the problem is a housing shortage in the US after years of underbuilding relative to demand. And there are signs that higher rates are discouraging homebuilders from starting new projects, exactly the opposite of what’s needed to bring down costs. New US home construction dropped in May, with residential starts declining 14.4% to the lowest number in more than a year.

From a broader perspective, developers have been notably gun-shy to make big investments since 2008 because shareholders haven’t rewarded them for doing so. Instead, equity owners have prioritized prudent balance sheets and cash payouts from housing companies that were decimated in the 2008 financial crisis.

Or, as Conor Sen, a Bloomberg Opinion columnist, said succinctly in our Twitter Spaces discussion Friday, “It’s a really tough thing because we think homebuilding companies are in the business of making homes, but at a certain point, it just becomes an investor base saying, ‘All I care about is return. I don’t really care about the business you’re in.’”

Without more construction, there’s still theoretically a way for the Fed’s monetary policies to bring down prices. There’s a common belief that high mortgage rates will eventually bring down values, and to some extent, parts of the US housing market are starting to cool. There are fewer sales and more price cuts on listed homes.

But the cooldown hasn’t hit valuations substantially yet, and it may not do so in the coming years because many owners bought when mortgage rates were low and can simply stay put through this phase of the economic cycle. Also, there was less speculation, and investors put more equity in the properties during a time of tight supply. This will keep many families locked out of homeownership and forced to rent.

In the meantime, higher rents will make it harder for key inflation metrics to start dropping. Shelter costs account for more than 30% of the consumer price index. While the Fed looks at different metrics, including one that gives a lower weighting to rent, headline consumer inflation matters for determining inflation expectations, as Fed Chair Jerome Powell noted at his press conference on Wednesday after announcing the decision to increase rates by 75 basis points.

The prospect of higher monthly housing costs on the heels of bigger Fed rate increases is an awkward and problematic idea. It highlights the bluntness of the tool the Fed is using to address the nuanced and multifaceted dynamics of inflation. Ultimately, the only way it can consistently dampen price increases without cooperation from the physical world — in this case, the addition of more houses — is to spur a deep enough downturn to fundamentally alter people’s standard of living, at least for the short term.

In the meantime, until such a decline in demand takes place, Fed policies will just keep tightening the screws on everyone, particularly those at the lowest end of the income spectrum, most of whom rent their homes.

To contact the author of this story:
Lisa Abramowicz at [email protected]