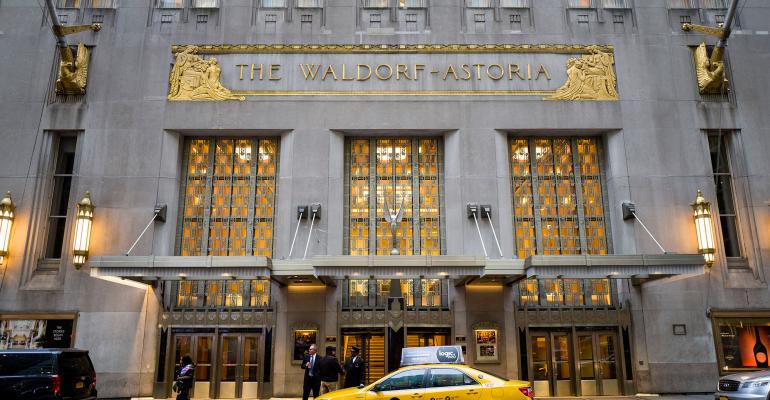 New York’s Waldorf Astoria hotel will be re-opened this week as a condominium building.

(Bloomberg)—New York’s shuttered Waldorf Astoria will re-emerge this week as a condo building, testing whether nostalgia for a cherished landmark can spark high-dollar deals in a market glutted with luxury homes.

The Park Avenue property, a high-society hangout that counted Frank Sinatra and Marilyn Monroe as tenants, has been getting primed for this moment since 2015. That’s when China’s Anbang Insurance Group Co. bought it for a record $1.95 billion with plans to convert a portion of the 1,400-room hotel into for-sale apartments.

Five years later, the Waldorf is still a construction zone, Manhattan is awash in ultra-luxury condos and the property’s once high-flying owner has had its wings clipped. Units won’t be ready until 2022, but the developer says the time is right to let the condo-buying public have a look. Their chance will come Tuesday, when a sales office with a model apartment opens.

“So many people -- from New York, from all over America -- have been inquiring and are very, very interested in owning a piece of something that could never be owned before,” said Dan Tubb, who is overseeing sales at the site for Douglas Elliman Development Marketing. “We know the market is what it is, but we’re seeing a level of passion and interest for the building that no other building really possesses.”

The developer, now known as Dajia Insurance Group, is pouring more than $1 billion into renovations as it tries to recoup a bet made at the top of Manhattan’s luxury condo market, when overseas investors were clamoring to buy second and third homes in new skyscrapers that were rising nearby.

But high-end condos have proliferated since then, and the multimillionaires who can afford them have all but lost interest. In Midtown alone, 763 new units are expected to become available this year, figures from the brokerage Core show.

“The data will tell you that this is not the time for another Midtown luxury condo,” said Donna Olshan, president of Olshan Realty Inc., a high-end brokerage based in Manhattan. The area “is saturated with inventory that could take a decade to sell.”

Dajia says its strategy is to deliver smaller units, offering a taste of opulence to investors who aren’t searching for a primary residence. More than two-thirds of the condos being marketed at the Waldorf have two bedrooms or fewer, Tubb said, and the cheapest is a 526-square-foot studio listed at $1.7 million. Two-bedrooms start at $4.75 million for a 1,129-square-foot unit on the 19th floor.

Residents will get all the perks available to hotel guests -- from room service to cleaning to concierge bookings. They’ll also have their own 25-meter lap pool, children’s playroom, screening theater and a choice of spaces they could use to throw a party. An 8,000-square-foot portion of the hotel’s roof will be re-imagined as a garden.

“I really believe because of the unit mix, because of the heritage of the building and the personal experiences that people have had with it, that we’re going to be very, very successful injecting buying energy into this market,” Tubb said.

But even Dajia is keeping things flexible. While plans call for 375 condos, only 75 are being marketed to start. The developer didn’t provide pricing estimates on the other units, including two duplex penthouses in the building’s copper pinnacles, according to the offering plan filed with the state.

Anbang was little-known in the U.S. when it bought the Waldorf from Hilton Worldwide Holdings Inc. in a deal that set a price record for a standalone hotel. The Chinese firm moved quickly to preempt a broader search for potential buyers, said Lawrence Wolfe, a leader of the team that advised Hilton on the sale who is now at Newmark Knight Frank.

Anbang followed the Waldorf acquisition with other purchases, scooping up billions of dollars worth of other real estate and insurance assets.

That spree ended abruptly in 2018 when Chinese authorities took control of the company and jailed its chairman for fundraising fraud. Anbang began paring investments, including a $5.8 billion portfolio of U.S. luxury hotels. The Chinese government created Dajia to house many of Anbang’s remaining assets, and released the firm from its custody on Feb 22.

When the Waldorf hotel reopens in 2022, it will have 375 rooms, far fewer than the version that made it a household name. The smaller room count makes it easier to deliver the level of service luxury guests expect, said Dino Michael, the global head of the Waldorf brand for Hilton, which has a long-term contract to manage the property.

Dajia intends to retain ownership of the hotel, Miller added.

Nostalgia could also spur condo sales at the tower, even in this market, said Charlie Attias, a luxury real estate broker who previously found buyers for more than 40 apartments at the Plaza, a Manhattan hotel that reinvented itself as a condo building more than a decade ago.

Attias, now a broker with Compass, got a call last month from a client in Geneva, who used to stay at the Waldorf whenever he would come to New York for business and pleasure. The notion of owning a piece of that personal history appealed to him, Attias said.

“People love the memories,” he said.

To contact the reporters on this story: Oshrat Carmiel in New York at [email protected];