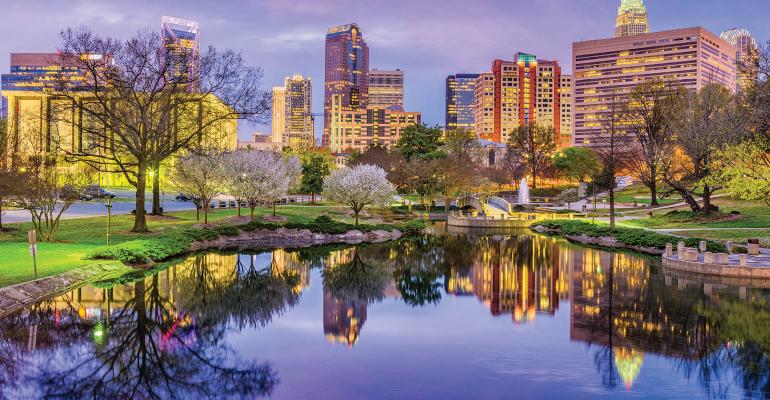 “The Southeast’s major metros have posted terrific apartment sector performance during this cycle,” says Greg Willett, chief economist for RealPage Inc., a provider of property management software and services based in Richardson, Texas. “Investment returns have rivaled the results generated in traditionally favored gateway markets, without the volatility sometimes seen in this part of the country during the past.”

Charlotte and Nashville rank among the markets where construction has been the most aggressive in this cycle. In Charlotte, apartment inventory has grown by an average of 3.6 percent per year since early 2010, the fastest expansion rate nationally, according to RealPage. Nashville follows close behind, with annual inventory growth averaging 3.3 percent, according to Willett.

However, all this new development has still not kept up with the growth of the local economy. For example, in Charlotte, the number of jobs in the metro area grew by 167,000 over the five years that ended in 2018. But the number of housing units, of all kinds, grew by just 93,000. “They are still 74,000 dwelling units short,” says John Sebree, director of the national multi housing group in the Chicago office of brokerage firm Marcus & Millichap.

As a result, apartment properties in these cities are nearly fully-occupied. The occupancy rate currently averages 94.6 percent in Nashville and 94.7 percent in both Atlanta and Charlotte, according to Willett.

Apartment rents are also growing quickly, rising 5.4 percent on average in Atlanta over the last 12 months, 4.1 percent in Charlotte and 3.2 percent in Nashville, according to RealPage.

Jobs are helping to attract young people to Southeastern cities. The number of jobs grew by 3.0 percent in Nashville in 2018, by about 2.5 percent in Atlanta and 2.3 percent in Charlotte. Those are all significantly higher than the 1.7 percent growth in employment in the U.S. as a whole. “They are all trending much higher than what the average is nationally,” says Sebree.

“Atlanta, Charlotte and Nashville all have been job production machines throughout the past decade,” he adds. “Lots of the jobs have come in comparatively high-paying industries, so there are many workers who can afford the big blocks of upscale apartments that have come on stream.”

The Southeast has an advantage over other parts of the country because there is lots of room to grow. “In older cities, maintaining older and less efficient infrastructure, it becomes difficult to progress,” says Sebree. “So many people are already there.”

There are also several secondary markets in the Southeast that are doing well, he notes—among them, Knoxville and Chattanooga in Tennessee, Jacksonville in Florida, Raleigh-Durham, N.C. and Charleston, S.C.

Multifamily investors have responded to this strong performance by paying high prices for apartment properties. For example, Atlanta was the number five most active multifamily investment market in 2018, behind Los Angeles, Dallas, Manhattan and Houston, with almost $7.5 billion in transaction volume, according to data from research firm Real Capital Analytics.