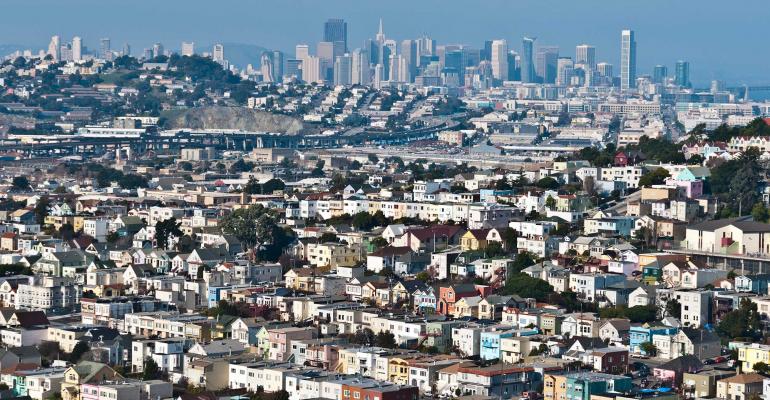 (Bloomberg)—San Francisco and San Jose’s rents are little changed compared with two years ago, a sharp contrast with red-hot markets such as Miami where housing costs surged during the pandemic.

The California technology hubs top U.S. metro areas with the smallest rent growth since February 2020, according to a Bloomberg analysis of data from Zillow Group Inc. In New York City and Washington, D.C., rental asking prices increased roughly 4% on an annual basis, less than half the national average of 8.5%.

The figures show that pandemic-era rents rose the least in some of the country’s priciest coastal cities.

“The major trends in rental housing demand throughout the pandemic have been toward warmer, sunnier, more affordable cities, and away from those that are colder, more expensive, and places where a larger share of people are in careers that allow them work remotely,” Jeff Tucker, senior economist at Zillow, said in an emailed statement.

Modest growth in housing costs is the hallmark of cities that have lagged behind in the recovery, including New York. San Francisco also has been struggling with the nation’s weakest office occupancies and one of the country’s slowest recoveries of jobs lost during Covid-19. And many tech companies are embracing remote work or letting employees move elsewhere.

Still, it doesn’t mean that New York, San Francisco or San Jose have become affordable. Average monthly rents in the two California cities are the highest in the nation at more than $3,000, based on Zillow data. That’s about $1,200 above the national level.

And the markets started to bounce back last year. San Francisco’s average rents dipped below $2,800 at the end 2020, but they crossed the $3,000 mark again last August and have been inching up since.

“It’s important to put these trends into the context of the pandemic,” said Danielle Hale, chief economist at Realtor.com. “While big tech cities missed out on the initial Covid surge in rents seen in other areas throughout the country, as people fled to less expensive and crowded areas, the relative bargains renters were finding in these historically-expensive markets are quickly disappearing.”