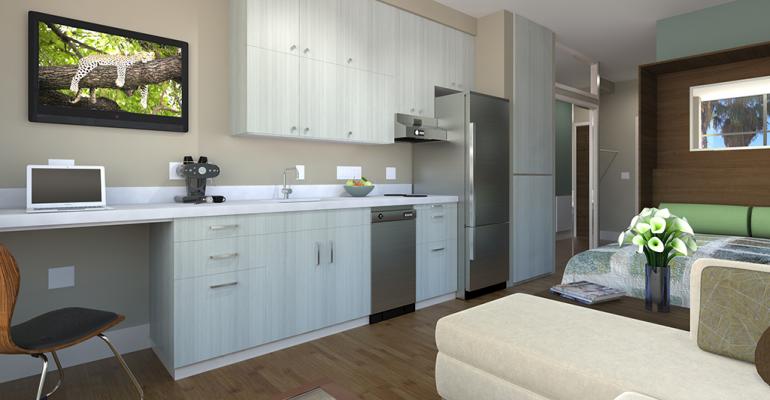 The Rise of Micro-Unit Apartments

In a previous column, I explored the recent and rapid transformation of urban living, driven by the desire among younger people—the millennial generation in particular—to enjoy the emerging live/walk/work lifestyle. There are many intriguing aspects of this trend, but among the most interesting is the size of the new apartment units being built—or rather, I should say, the lack of size.

Micro-units—rental apartments about the size of a hotel room—represent a small but growing niche of the real estate multi-housing market. These miniscule living units seem ideally suited to young people who are mobile, come and (mostly) go and live the “18-hour” lifestyle of the modern urban townscape.

So what is a micro-unit anyway? It varies, depending on where you are. According to a report by the Urban Land Institute (ULI), a micro-unit might be 300 sq. ft. of living space in New York City or 500 sq. ft. in Dallas. It might encompass a small studio or a one-bedroom apartment with a communal “chef kitchen” down the hall, and there may be a rooftop garden and exercise room for all to enjoy.

For a recent design competition in New York, apartments as small as 220 sq. ft. were allowed, the same size permitted in Washington, D.C. Can you say "one-car garage"?

The attendant attractiveness of urban living can’t be stressed too much when it comes to micro-units. Besides the affordability issue of small-space living, millennials in particular are trading off space for work proximity and a flexible lifestyle. In many cases, they’re graduating from school or entering their first jobs, signing leases and moving in with only a suitcase.

Part of this somewhat ephemeral lifestyle is rooted in a sense of independence, but also a general skepticism about work. According to a PwC survey, the younger set is prepared to pack up, move and enjoy a similar lifestyle in Mumbai or Singapore if the offer is interesting and compelling. For these folks, nothing is so cherished that it can’t be left on the curb. For sure, they really don’t want to keep grandma’s armoire.

The real estate industry is responding. ULI notes that in rental properties built during the 2012–2013 timeframe, the average unit size of 950 sq. ft. is down nearly 50 sq. ft. from the average recorded in the previous cycle.

Seattle has 780 micro-housing units recently cleared for occupancy and another 1,598 units in the pipeline. The New York Department of Housing Preservation and Development’s request for proposals for a micro-unit pilot program in Manhattan saw the RFP downloaded some 1,600 times and with 33 completed forms submitted—reportedly the largest response ever to a department proposal request. The city’s My Micro NY micro-apartment complex, with 55 units ranging from 260 sq. ft. to 360 sq. ft., will begin leasing units this summer for around $2,000 to $3,000 a month.

For investors and developers, the appeal is clear. ULI has found that smaller units enjoy higher overall occupancy rates than mid-sized or larger units, and calculates that rental prices of these units—averaging $2.647 per sq. ft.—are up to 81 percent higher than larger units.

Opportunities also appear strong because small units are under-represented in the housing inventory, according to ULI. Micro-units make up less than 3 percent of total apartment development supply, although they’re more popular in dense urban environments where millennials are flocking.

If investors and developers can find the right millennial-intensive environment, the urban live/walk/work lifestyle to go with it, and the zoning and permits that allow extremely small units, the opportunities are abundant—even if the living space is not.

R. Byron Carlock Jr. is a principal and the national real estate practice leader at PricewaterhouseCoopers. He can be reached at [email protected].