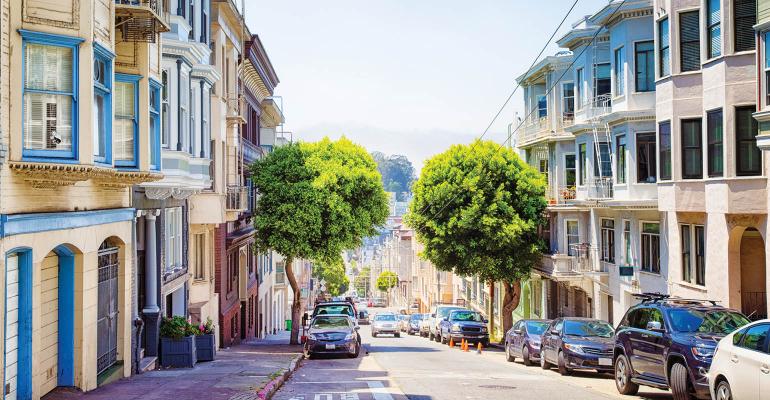 The case for increasing construction becomes more solid by the day.

(Bloomberg Opinion)—San Francisco, the archetype of the urban housing affordability crisis, appears to have decided that enough is enough. Proposition E, a ballot measure that will be voted on in March and is widely predicted to pass, will tie construction of new office space in the city to building subsidized, affordable housing. If the city falls short of its commitments to the state to build the latter, the cap on the former will be lowered by the same percentage. Because San Francisco’s elected officials tend to nix most new housing construction, including the affordable variety, this means there could soon be a shortage of office space as well.

That will probably restrain rents. Fewer offices mean fewer workers in the city, because most people live near where they work. That translates into less demand for housing, which will reduce the pressure on rents. This will come as a relief for beleaguered middle-class families at risk of being priced out of their homes. But it also carries risks for the city; restrictions on new office space could also see local businesses and smaller companies priced out by deep-pocketed tech behemoths, hastening the city’s transformation into a town dominated by a few large companies. That's not the optimal way of fighting rising rents.

But San Francisco is just that kind of city; it errs on the side of banning things. For other local and state governments struggling with rising rents, there’s an alternative path -- build more housing.

The case for increasing construction becomes more solid by the day. A new paper by economists Brian Asquith, Evan Mast and Davin Reed finds that building one large new market-rate apartment building in a low-income, gentrifying urban neighborhood tends to reduce rents within a 250-meter (800 feet) radius by 5% to 7%. This stands in sharp contrast to the theory that building new apartment buildings raises nearby rents by drawing high-income residents to the area. Instead, it looks as if new housing attracts relocating workers and prevents them from pricing out existing renters.

Although a 5% to 7% rent reduction within a small area is nothing to sneer at, it’s not a big enough effect to overcome the deluge of demand in a place such as San Francisco. At best it will slow the change, and it will probably have to be paired with reasonable rent control measures in some places. But if a lot more cities and neighborhoods throughout the country build more housing, the effect would probably be greatly amplified.

More housing in outlying suburbs and cities would allow more workers to live cheaply and commute to the city center, especially if paired with better transit. Increased supply would also lower rents in those areas and entice industry to spread out more, relieving demand pressure on the central city. And more housing in emerging technology hubs such as Seattle and Austin, Texas, in addition to up-and-coming cities like Denver, would give companies more options, spreading demand more evenly throughout the country.

The key to encouraging new construction will be cutting development restrictions. A new report by researchers Cecile Murray and Jenny Schuetz of the Metropolitan Policy Program takes advantage of new data on California housing restrictions collected by the Turner California Residential Land Use Survey. The researchers note that in the 2010s, there was a negative relationship between rent and housing construction -- basic economics would imply that places with higher rents would build more, but the opposite happened because of land-use restrictions. The researchers found, unsurprisingly, that height limits and caps on the number of apartments on a parcel of land were associated with less construction.

Now researchers will be able to verify that similar problems are cropping up nationwide. The Wharton Residential Land Use Index, a nationwide survey of local housing ordinances, measures multiple types of regulation: approval requirements, supply caps, density limitations and so on. It shows that restrictions on construction are greatest in big coastal cities and have been increasing over time. It’s becoming ever clearer that the reluctance to build more housing is a national problem.

Excessive restrictions on construction aren’t just causing headaches for renters; they also probably hurt national productivity. A new model of urban growth by economists Gilles Duranton and Diego Puga found that the synergies between workers and companies that have caused the boom in hot cities tend to get choked off by housing regulation, leaving the nation poorer as a result. This is similar to what other economists have found using very different sets of theoretical assumptions; basically, superstar cities are so productive and desirable that it’s good to fit more people into those cities.

The quickest solution is widespread upzoning. Oregon and the city of Minneapolis have recently banned single-family zoning, allowing duplexes and other forms of moderately dense housing everywhere. Meanwhile, California’s pro-housing forces are trying again, with a revamped version of a bill that would force cities to allow more density; an earlier version of the bill was killed by a powerful appropriations committee chair last year. If measures like these become common nationwide, the country’s suffering renters will finally get a break and the economy will get a boost.

To contact the author of this story: Noah Smith at [email protected].