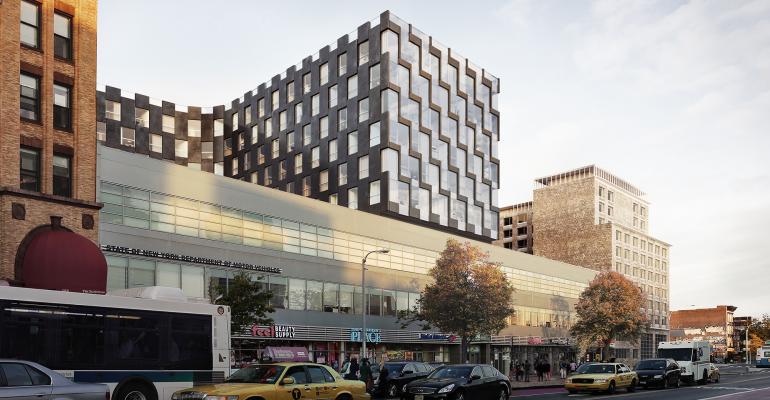 A rental building designed by Danish architect Bjarke Ingels is slated to open in East Harlem in September, as Manhattan lease signings plummet.

(Bloomberg)—Rental inventory in Manhattan is surging, and the number of lease signings is plummeting, but that’s not stopping a new “starchitect”-designed rental building in East Harlem from opening in September.

“It’s not a good real estate market, period,” says David Blumenfeld, vice president of the Blumenfeld Development Group, which owns the project. “I don’t think we’re really focused on where we start. We’re focused on a couple of years out.”

Still, Blumenfeld is optimistic. Not only does he expect every unit to be rented, he expects all 233 apartments will be filled within a year of the building’s opening—a relatively standard timeline. “We’re hoping for nine months,” he says. “But I’m going to conservatively say 12 months.”

His confidence stems from the building’s proximity to the 125th Street Metro North Station, which could draw commuters, and the New York Proton Center, less than two blocks away and whose employees might want to live nearby. Blumenfeld has a long history of working in the neighborhood as well: The company developed East River Plaza shopping mall, which opened in 2009.

Even more than that, he’s banking on the building’s design, which was conceived by star Danish architect Bjarke Ingels.

Blumenfeld says that he always wanted a striking building for the the site, a onetime vacant parking lot on East 126th Street. “We’re trying to create a neighborhood that's growing and thriving,” he says. “I didn’t really want to build a boring Manhattan building.”

When he met Ingels, Blumenfeld says he realized: “You’re talking about a totally different way of thinking.”

After Ingels was hired and submitted a rough rendering, there was an initial meeting filled with engineers, architects, zoning lawyers, and people from the development team.

“Bjarke comes in. He’s completely disinterested in what’s going on in the meeting,” Blumenfeld recalls. “And after 20 minutes of talking, he grabs a sharpie and a newspaper—and he’s doodling, lifts his head up, picks up the newspaper, and says, ‘I changed the design of the building.’”

Blumenfeld’s reaction, he says, was “OK, I’ve hired a design genius.” The sharpie sketch “was way better than what we were working off of.” (To his chagrin, Blumenfeld misplaced the newspaper.)

Ingels’s design, which Blumenfeld says he had to “bring down to a bit of reality,” entails a gently curved facade with high, angled windows that catch the sunlight. He named the building “the Smile” because its facade lightly resembles a curved mouth.

Apartments range from studios to two bedrooms. Prices run from $2,300 a month for a studio to about $5,000 a month for the most expensive two-bedroom apartments. “A Bjarke Ingels building somewhere in midtown would be 2 1/2 times the price,” Blumenfeld says. The median Manhattan studio price in June was $2,705, according to a report by Douglas Elliman; the median two-bedroom was $4,756.

“Unlike typical apartments, these are a bit larger, which plays into a post-Covid world,” he continues. Studios are mostly 450 square feet; one-bedrooms are roughly 600 square feet; two-bedrooms are around 850 square feet. The aesthetic is “minimalist-meets-architectural loft,” he says, with white resin floors that “make the apartment super light and comfortable.”

Also inside is a fitness center, a “wellness retreat” with a spa and dance studio, and a rooftop swim club with a plunge pool, whirlpools, and barbecues.

Despite the building’s advantages, it arrives during an historically bad period for Manhattan rentals.

“Price declines have been accelerating,” says Jonathan Miller, president and chief executive officer of appraiser Miller Samuel Inc. “The challenge in the market now is that, because of the exodus of Manhattanites, the market still hasn’t woken up,” he says.

Worse, the rental market will be more challenging than the purchase market over the next year or two, Miller continues, “largely because unemployment has been heavily skewed towards lower wage earners, who tend to be renters.”

Another 23 of the apartments are for people who qualify for middle-income housing, and range from about $2,000 a month to $2,849 a month. “We put a wide range on that extra tier, but the problem is we were trying to attract nurses, doctors, firemen, police officers—and a lot of those people don’t really want to go through the city’s application process,” he says. “So we’ll see how that comes out.”

Blumenfeld is in conversation with those and other groups to encourage their members to move in. “We’re talking to law enforcement groups,” he says, in order to provide “an extra bonus to come to the building.”

Ultimately, he expects The Smile’s design and amenities will do most of the heavy lifting. “Look, I’ve spent 20 some-odd years in this community,” Blumenfeld says. “People are looking to grow within this community, and having a jewel of a building like this is something that can make them proud.”

To contact the author of this story: James Tarmy in New York at [email protected].

To contact the editor responsible for this story: James Gaddy at [email protected]