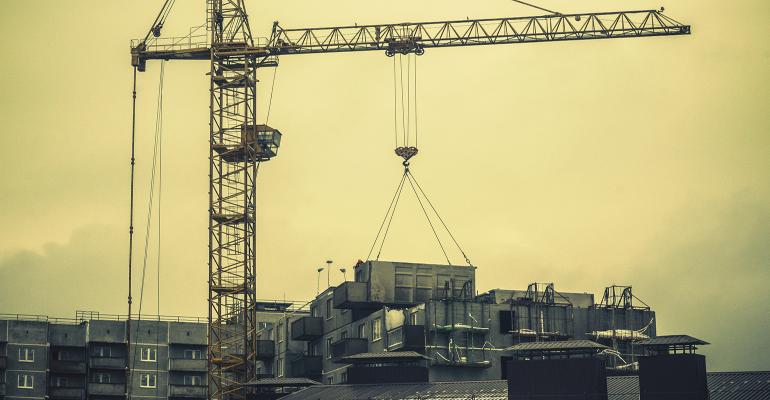 As more multifamily developers experiment with modular construction, its use is increasing.

Multifamily developers may finally be about to embrace modular construction.

“Something of a perfect storm may be forming that changes the equation for modular construction,” says Rick Haughey, vice president of industry technology initiatives for the National Multifamily Housing Council (NMHC).

For years, modular construction has only been used to build a fraction of the apartments buildings rising in the U.S.—despite frequent testimonials about the time and money that developers can potentially save by going modular. However, as more developers experiment with modular construction, the pace is picking up. In addition, labor costs have risen as the availability of tradespeople has declined, creating expenses and difficulties for the traditional on-site building process.

Modular construction refers to construction in which large pieces of a building are created at a factory and are transported to the development site on the back of a truck where the pieces, or modules, are lifted into place, usually with a crane. Modular construction experts says that the technique can dramatically shorten the time it takes to create a building, reducing the cost of financing the project. Faster construction also reduces the risk that a building will come on the market that has become weaker since construction started.

Modular construction was used to build 3.02 percent of “commercial housing,” a similar category to “multifamily housing,” built in 2016, according to the Modular Building Institute (MBI), based in Charlottesville, Va.  That’s up significantly from 2.32 percent in 2015.

“We are still looking at the 2017 data, but expect it to increase,” says Tom Hardiman, executive director of MBI. Local officials have expressed an interest in modular construction. For example, the New York City Department of Housing Preservation and Development recently began a formal process that could lead to a large-scale modular program.

A number of construction companies now go far beyond just creating the modules in their factories—some also act as the general contractor and even the designer, cutting down of the potential confusion between team members struggling to work with a new method of construction.

“We offer a turn-key solution,” says Roger Krulak, founder of Full Stack Modular, which creates its modules in a factory at the Brooklyn Navy Yard in Brooklyn, N.Y. The firm plans to start four projects in 2018 to build midrise townhouse apartment communities, rising four to five stories high. By 2019, the firm plans to be at its full capacity, producing projects totaling 500,000 sq. ft. of space. FullStack produces modules that are fully-finished pieces of their buildings, complete with interior walls, electrical outlets and plumbing fixtures.

This spring, modular company FINFROCK, based in Apopka, Fla., will earn its last certificate of occupancy for Broadstone Winter Park in Winter Park, Fla., developed by Alliance Residential Co. Construction started in January 2017 on the seven-story, 268-unit apartment complex with 480 parking spaces in a precast garage. The construction process will be completed in just 15 months, significantly less time than conventional construction.

The company creates concrete modules in its factory that are finished on-site. FINROCK can also act as general contractor, engineer and architect for the projects that it works on. The concrete pieces are brought to the job site on trucks and lifted directly into place by a crane. That means that FINROCK’s developments don’t require a large staging area. “We ship directly to the hook, so there is no large laydown area,” says William Finfrock, president of Finfrock.