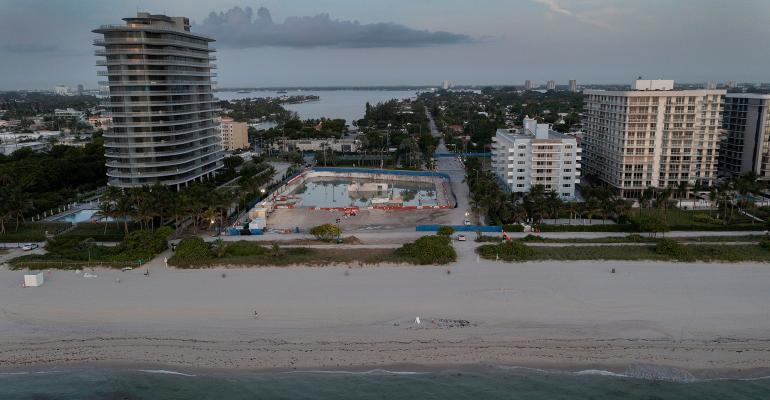 The site for Eighty Seven Park was sloped so run-off poured into Champlain Towers and undermined the building’s structural integrity, the lawsuit alleges.

(Bloomberg)—The catastrophic structural failure that led to the collapse of the Champlain Towers condominium outside Miami in June was linked to construction of a luxury high-rise development next door, according to a lawsuit filed by families of people killed in the disaster.

Developers of the Renzo Piano-designed Eighty Seven Park were improperly allowed to build higher and larger than originally entitled, according to the suit filed Tuesday in Miami-Dade County circuit court. The project site was sloped so run-off poured into Champlain Towers and undermined the building’s structural integrity, which was also damaged by excavation and pile-driving, the suit claims.

When residents at Champlain Towers raised concerns about the work to the developer, lawyers for project developer Terra Group LLC offered $200,000 in payments to residents on condition of confidentiality rather than fix the damage, according to the complaint. It cited a 2019 email by Terra Group Chief Executive Officer David Martin to other development executives, saying: “Keep moving the job forward ... Do not let any neighbor delay us.”

Terra Group has developed residential and commercial real estate projects throughout south Florida totaling about 5 million square feet and valued at $8 billion. The complaint also named the general contractor and engineering consultants on the project as defendants.

The developer’s lawyer denied the allegations in the lawsuit.

“The construction of Eighty Seven Park did not cause or contribute in any way to the tragic events of June 24, 2021,” attorney David B. Weinstein said in a statement Wednesday. “As numerous media reports have documented, Champlain Towers South was improperly designed, poorly constructed, significantly underfunded, and inadequately maintained and repaired.”

The Champlain Towers collapse has triggered a debate over coastal development, where older and less affluent residents are struggling with the cost of upkeep on modest buildings while more glamorous new developments are being built.

Champlain Towers was a 12-story, 136-unit building completed in 1981. Eighty Seven Park, by contrast, has 18 stories and 70 units -- some with as many as five bedrooms and more than 5,000 square feet -- as well as a spa, a gym, private gardens and other amenity features. Listings are priced from $2 million to $24 million. Prior to its development, the Miami Beach site had been home to a Howard Johnson hotel. The claim against Terra Group was lodged in an ongoing lawsuit filed by the families shortly after the collapse in the early morning hours on June 24, killing 98 people as 55 units were destroyed. The rest of the building was deemed unstable and demolished 10 days later. Previously, the families had only named the Champlain Towers condominium association as a defendant, saying it had failed to take necessary steps to protect the structure.

Though Miami Beach zoning laws at the time limited developments to 60 feet in height, the city council amended the code for the area to allow the Terra Group property at 200-feet high, according to the complaint. A fact sheet on the development’s website said the building height is 233 feet. Champlain Towers was just on the other side of the city limit, in the neighboring town of Surfside, Florida.

The developers also bought a street from the city and expanded the project to incorporate the land, which led to excavation and construction just 10 feet from the foundational wall of Champlain Towers, the complaint said.

Vibration monitoring during construction also showed that pile driving for the project routinely caused vibration to exceed allowable limits, according to the complaint, despite concerns about damage to surrounding structures. Residents complained about cracks appearing in walls of their units.

The case is In Re: Champlain Towers South Collapse Litigation, 2021-015089-CA-01, Circuit Court of the Eleventh Judicial District, Miami-Dade County