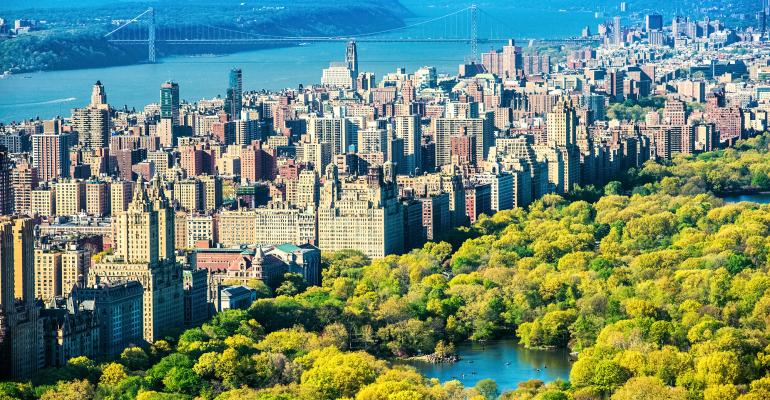 Building managers are telling apartment owners and tenants to prepare for a strike, asking residents to plan to help.

(Bloomberg) -- Residents of high-rise luxury apartments might have to take out their own trash and retrieve packages themselves as the doormen and staff for 3,000 New York buildings threaten to go on strike.

The union contract for more than 30,000 workers from buildings owned by companies including Vornado Realty Trust and Related Cos. expires April 20. The property managers are looking to cut back employees’ vacation days and sick leave, while forcing staff to cover more of their healthcare costs, now fully borne by the management firms.

Building owners and managers haven’t proposed specific figures for wages, according to Kyle Bragg, president of the SEIU 32BJ union representing the workers. Negotiations are far from over: there are seven more bargaining sessions scheduled before April 20, a union spokesperson said.

Building owners and managers, who are being represented by the Realty Advisory Board on Labor Relations, say discussions are advancing.

“We will continue to work towards reaching a fair contract for both sides by April 20th,” Howard Rothschild, president of the group, said in a statement. A spokesperson for Related declined to comment, and a representative for Vornado didn’t immediately return a request for comment.

Doormen, superintendents and other building workers played a key role in keeping apartment buildings functional as much of the world shut down in during the pandemic, often endangering their own health in the process. They are seeking better compensation at a time when the U.S. is going through a period of labor unrest not seen since the early 1980s.

The New York building workers are paid $26.45 an hour on average, or around $55,000 a year, according to the SEIU 32BJ. They’ve been receiving pay and benefit increases of about 3.3% a year under their contract from 2018 which expires later this month. But expenses have been rising faster than that-- in the New York metropolitan area, costs rose about 5.1% in February from the year before, according to the U.S. Bureau of Labor Statistics.

Building managers are telling apartment owners and tenants to prepare for a strike, asking residents to plan to help with trash collection, security, and other services. Hoyt & Horn Management warned residents of its Brooklyn property that it will hire a security guard to staff the front door, but the guard won’t operate the intercom, screen guests, or accept packages. Residents will have to take their own trash to the street, because compactor rooms will be closed.

Bryce Moreno, 35, a doorman and porter at a building on East 79th Street and Second Avenue in Manhattan, said he is feeling disrespected and undermined. “You clap for us at one moment and then, you know, you’re trying to reach into our pockets and pull out what we’ve got the next,” Moreno says. “We are not trying to give up anything.”

Moreno, who has been working in the industry for about 14 years, makes about $26 an hour on average. He says given the rise in inflation he is “fighting to get increases in wages that match the cost of living in the city and country.”

The labor battle comes as apartment renters are also finding themselves squeezed. The median cost to rent an apartment in Manhattan in February was $3,700 a month, up 4.2% from January and 23.5% from a year earlier, according to real estate broker firm Douglas Elliman.

“With inflation right now a lot of people live paycheck to paycheck,” said Crystal Ann Johnson, 35, who works as a concierge and is a doorperson at the Silver Towers in Manhattan. “We are going to get what we deserve.”