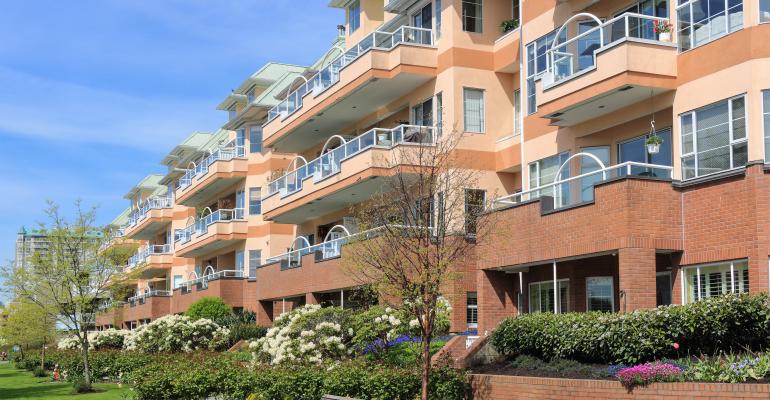 Lenders Continue to Fight for Market Share with Multifamily Deals

Multifamily investors are still able to get low interest rates on permanent loans as different lender groups continue to compete for market share.

“The competition between the agencies and life companies is creating bidding wars on the debt side, with increased interest-only and decreased spreads a requisite to win deals,” says Brandon Harrington, managing director with JLL Capital Markets.

Benchmark interest rates like the yield on 10-year Treasury bonds have risen nearly half-a-percentage-point since last year. But the interest rates on permanent loans for multifamily assets have remained relatively stable. To make more loans, lenders are cutting the extra amount that they add to interest rates—the “spread” between their cost of capital and the interest rates they charge borrowers.

Lenders keep fighting to make loans partly because on a national basis, apartment rents continue to rise. “We’ve been expecting a moderation of rent growth for a few years now and have continued to be surprised how resilient the market is,” says Harrington.

Rent growth has slowed down, however, as developers open new apartment communities a little faster than renters are signing leases and moving in. “We do expect there to be an uptick in vacancy rates and rent growth will moderate in 2019 and 2020,” says Harrington. “Most of the markets with supply overhang will continue to have strong job and population growth to help combat this.”

Lenders have also become more interested in lending on properties in smaller cities and secondary markets as larger investors have begun to buy more properties in these places.

Freddie Mac and Fannie Mae lenders continue to provide more permanent loans to apartment properties than any other type of lender. “Volume-wise they continue to be the largest providers of debt capital,” says Kiffe.

To stay on top, the government-sponsored entities (GSEs) have cut the spreads that they charge on loans. “We have seen spreads from both lenders decrease from a year ago, especially for the strongest borrowers, which has helped combat the increase in Treasuries and the London Interbank Offered Rate [LIBOR],” says JLL’s Harrington.

These loans rarely cover more the 65 percent of the value of the property, even though agency loans can technically go up to 80 percent. That’s because as property prices rise relative to the income produced by the property, the debt service coverage ratio that lenders require has become a limiting factor.

Borrowers can still get higher leverage if they take out a mezzanine loan in addition to the permanent mortgage on their property. Freddie Mac’s new mezzanine loan program provides another 10 or even 15 percentage points of leverage to borrowers with properties that meet Freddie Mac’s standards of workforce housing.

Life company lenders now offer all-in interest rates from 4.00 percent to 4.25 percent for permanent loans that cover less than 65 percent of the value of apartment properties. In special cases, they can even offer interest rates in the 3.00 percent range, though such cases are rare, according to Kiffe.

Banks also continue to offer permanent loans at competitive terms. Conduit lenders have become more consistent. “It is a more consistent capital source than it has been – though the certainty of execution is not like the life companies or the GSEs,” says Kiffe.

“We have also seen the full-term interest-only more widely used as a means to combat the lower leverage,” adds Harrington.