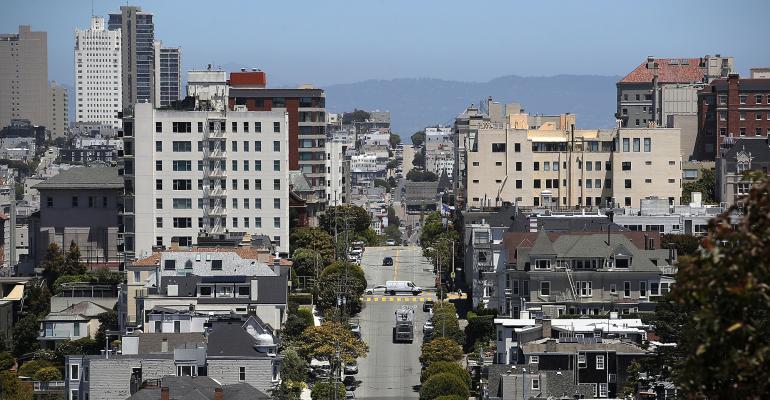 (Bloomberg)—When Yat-Pang Au founded Veritas Investments in San Francisco in 2007, Facebook and Twitter were in their infancies, while Lyft and Uber were still just ideas.

The city was on the cusp of another technology boom, drawing entrepreneurs and money from across the country, and Au rode it to become one of San Francisco’s biggest residential landlords.

Over the past 12 years, Veritas has partnered with investment firms including Baupost Group and Ivanhoe Cambridge to acquire 265 buildings worth more than $3 billion. It also has drawn the ire of housing activists and dozens of Veritas’s own tenants, who say the company’s goal is to push out rent-controlled occupants in favor of the younger, richer tech workers who’ve helped transform the city and contributed to its affordability crisis.

“They’re really just trying to undo rent control in San Francisco,” said Greg Pennington, 62, who has lived in an apartment near the city’s Tenderloin neighborhood for more than four decades. He was among more than 200 protesters gathered outside Veritas’s corporate offices last month, waving signs and chanting, “Housing is a human right.”

Such clashes are common in cities like San Francisco and New York, where demand for affordable housing greatly outstrips supply and booming economies draw a steady stream of new residents. Exacerbating the situation in the Bay Area are land-use policies that limit construction, even as investors push up prices in existing buildings.

Justin Sato, Veritas’s chief strategy and portfolio officer, said the company has become the focus of protests because of its size.

“This isn’t necessarily a Veritas issue,” Sato said. “This is more of a San Francisco, rent control, affordability story.”

Au, 50, who declined to comment, grew up in San Jose and Los Gatos with three younger brothers. His father started a security and alarm-systems company and his mother invested the excess cash in apartments. He got the first taste of being a landlord by fixing the coin-operated washing machines in the family’s buildings and made his first deals in 1996, when he bought seven condo units.

He founded Veritas about a decade later and is now worth more than $100 million, according to Bloomberg estimates. Juliana Bunim, a spokeswoman for the firm, declined to comment on Au’s net worth.

One of Veritas’s first big portfolios emerged from the wreckage of the Lembi Group, a San Francisco real estate investor that had many of its properties foreclosed on during the 2008 financial crisis. Lembi sought to maximize the value of rent-controlled apartments it invested in, often using evictions and buyouts. A lawsuit filed by the city in 2006 accused company employees of impersonating law enforcement, going into apartments armed and dressed in fatigues, demanding to see immigration documents, as well as other examples of tenant harassment. The case was settled in 2011, with the landlord agreeing to pay up to $10 million in fines without admitting any wrongdoing.

Housing rights activists don’t consider Veritas a serial evicter, but allege the firm employs subtler methods of getting rent-controlled tenants to move out, such as disruptive construction and the use of passthroughs, which allow landlords to increase rents to cover upkeep costs.

Renter’s rights are relatively strong in San Francisco, making it difficult to evict tenants, said David Garcia, policy director at the University of California Berkeley’s Terner Center for Housing Innovation. So landlords sometimes harass tenants to try to get them to leave the building on their own, he said. Once a rent control unit is vacated, landlords can raise the price as much they want.

And those prices can vary greatly. For example, a tenant who occupied a two-bedroom apartment in a Veritas-owned building on Sutter Street since 2003 paid about $778 a month at the end of 2017, while a renovated, similarly sized market-rate unit now goes for four times as much.

“It’s not anywhere in our investment thesis to try to drive residents out and mark up those rents,” Veritas’s Sato said.

Last week, Veritas announced it will eliminate some passthroughs at 34 of its buildings. Over the next five years, it also intends to build “hundreds” of accessory dwelling units, or ADUs, which create housing in garages, basements and other underused areas, the company said in a statement. Veritas said average rents in its buildings are about 40% below market rate.

The business has been lucrative. In 2012, Veritas bought 430 units from BlackRock Inc. for $83.9 million, according to a credit report. Four years later, they refinanced at a valuation of about $190 million, with debt of $138.5 million. Assuming a similar level of debt when the buildings were originally purchased, Veritas and its partners would have quintupled their equity investment in just four years.

Wording in loan documents makes it clear that part of the building’s appeal is the upside that could be realized from raising rents to market levels.

A document describing a $349.8 million Goldman Sachs loan to Baupost and Veritas said there was “$23 million in potential rent that is currently not being captured on in-place leases,” because of rent control. The buyers’ “ability to renovate units that become vacant could allow them to capture some of this.”

Veritas’s loans are standard for the industry, spokeswoman Bunim said. An Ivanhoe Cambridge spokesman said the firm’s goal is to “generate returns,” but also strives to “contribute positively to the well-being of the communities in which we invest.” A Baupost spokeswoman declined to comment.

Disgruntled tenants and activists point to the wording in these documents to argue that the constant construction is just a ploy to make living in their buildings unbearable.

“I’ve become a housing-rights activist out of necessity,” said Adrian Anzaldua, a medical student who lives in a building that was acquired by Veritas in 2014. He said about half of his neighbors have moved out. “Everyone just feels miserable living in these places.”

Aside from disruptive construction, Veritas also has shut down elevators, trapping a disabled tenant in her apartment, and closed off trash chutes, according to an investigation last year by a ABC-owned station KGO-TV.

Veritas follows the city’s fire-safety recommendations when it shuts trash chutes and notified all residents of the elevator repairs, Bunim said.

Tenants also take issue with Veritas using passthroughs to have tenants cover some of the construction costs.

Passthroughs are a common tool used to cover the cost of maintaining and improving a building, said Janan New, executive director of the San Francisco Apartment Association, a nonprofit for landlords.

“It’s within everyone’s right to do these passthroughs, but whether they take advantage of them or not is each person’s own business model,” New said.

Tenants said the changes aren’t being made for their sake, but to attract Au’s younger target market. Many of Veritas’s properties are in the Tenderloin, a 50-square-block area notorious for crime and vagrancy. Groups of homeless people line the sidewalks in front of grand but decaying Victorian apartment buildings. Tenderloin rents have remained relatively low, even as adjacent neighborhoods have seen rapid gentrification.

A design plan for one of Veritas’s Tenderloin properties touted the use of white-on-white finishes to help transform the building “from gray and gritty to more of a young urban vibe.”

The concept of housing as a right is inherently at odds with the real estate investment objectives of a hedge fund or pension fund. And stronger rent control policy won’t necessarily solve the problem, Terner Center’s Garcia said.

“Rent-control is a short-term solution,” he said. “Over the long term, the real solution for the affordability problem in places like San Francisco is to increase the new supply of housing across the income spectrum.”

To contact the reporters on this story: Sophie Alexander in New York at [email protected];