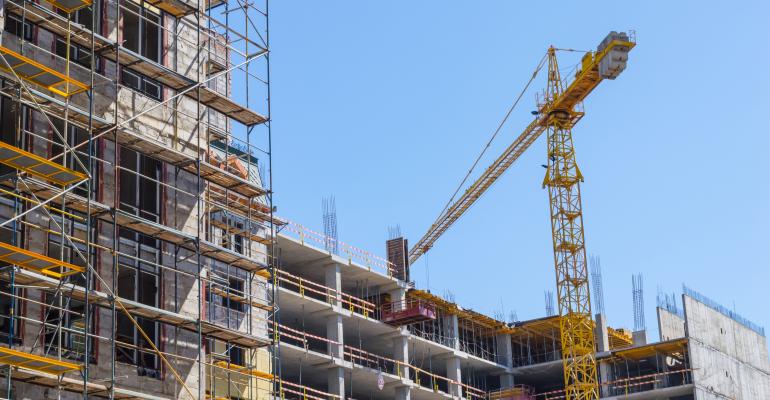 That’s a lot of extra time, especially for projects that often take just two years to complete. Every week of construction delays results in a week of lost income, and another week during which the developer must pay the rising cost of the project’s often floating-rate construction loan.

“We aren’t facing labor shortages, but rather cost increases that are needed to ensure there aren’t any shortages,” says Marc Padgett, president of Summit Contracting Group, a general contractor for apartment projects.

The extra time it now takes to finish an apartment building has added more uncertainty to expectations of how many new apartment units will open over the next few years. It’s one of the reasons that vacancy rates in the apartment sector rose more slowly than anticipated in some markets. It’s also a big reason why the number of new apartments that opened in 2018 fell to 300,000 in 2018. “This decrease in construction completions can largely be attributed to delays,” says Rybczynski.

In 2019, developers are expected to finish 340,000 new units, as thousands of apartments that developers had planned to complete in 2018 finally open. “The market is working though those construction delays, and that this will allow completions to rebound to some degree next year,” says Rybczynski.

The average delay of five months is not likely to get much longer in 2019, though it is also unlikely to shrink. “Those delays seem to be at least evening out, in no small part due to a decrease in multifamily starts,” says Rybczynski. “At a national scale it would appear that things are stabilizing.”

However, the number construction workers available to build apartments is not rising quickly enough to curtail delays anytime soon. “Unemployment rates are at an all-time low right now, so it does not appear that it [the challenge of finding workers] will improve for quite some time,” says Padgett.

Five months of delays is a significant increase from the first half of 2015, when developers were often finishing projects faster than their initial estimates. It’s also a big increase from early 2017, when developers finished projects with an average delay of about three months, according to CoStar. (That delay is the average for apartment projects completed over the preceding three months. It measures the difference between the time developers initially told CoStar their projects would take to build and the number of months it really took.)

The biggest shortage of workers is currently among the specialized trades needed to build complicated projects, like taller buildings.

“The most acute shortage is of highly-skilled tradespeople,” says Taylor Brown, president of NRP Construction, the general contracting arm of developer NRP Group. “As a result, highly-complex construction projects are at risk of the greatest delays and the greatest number of mistakes.”

Top developers and general contractors are fighting to attract and keep workers and subcontractors with higher pay and strong relationships.

“We have not seen an issue with the quantity of labor, but rather the cost for having it,” says Padgett. The cost of labor is growing significantly faster than inflation, though it varies from market to market, and is also based on the relationships that the firm has built with its subcontractors. “Due to buying power we have the ability to keep subcontractors very busy, so this allows us some opportunity.”

To keep these relationships strong, developers and general contractors carefully maintain their reputations in the markets where they are active. For example, they make sure that their subcontractors are consistently paid on time.