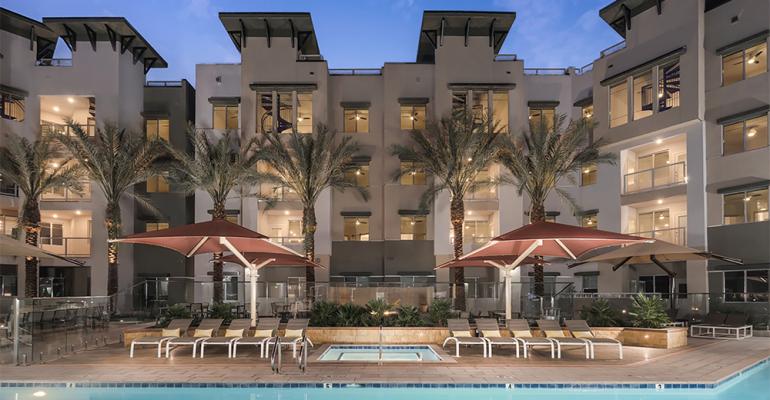 (Bloomberg)—KKR & Co. has acquired a residential building outside of Phoenix, its latest wager that residents who left fast-growing cities during the pandemic are returning and eager to rent luxury apartments.

KKR purchased The District at Scottsdale, a 332-unit property built in 2019, said Chris Lee, a partner at the New York firm and its head of real estate in the Americas. “It’s part of a broader strategy we began embarking on last summer when we took a contrarian view that people would come back to cities as quickly as they left,” he said in an interview.

KKR has amassed an apartment portfolio with a gross asset value of $1.2 billion and has another roughly $300 million in properties under contract, Lee said.

KKR is interested in so-called 18-hour cities, which are luring new residents with favorable cost-of-living standards and attractive social, physical and educational infrastructure, such as Dallas and Miami, Lee said. The firm’s conviction around luxury apartments was fueled in part by data from its in-house economists who estimate that U.S. households stashed away $2.5 trillion in excess savings during the pandemic.

“This recession was awkward in that many white-collar workers remained employed; they simply got sent home and didn’t have an outlet to spend their earnings so savings rates went up,” Lee said. “We saw a huge opportunity to buy luxury apartments and started getting aggressive with our thesis -- and want to own these properties for the next 20-plus years,” he added.

Competition from other commercial real estate investors such as pension funds is heating up as they get more comfortable about cities and the U.S. economy reopening, Lee said. Leasing activity has recovered, and rental concessions have all but disappeared in recent months, he said.

“Net effective rents have come back faster than we originally underwrote which is a function of people having money to spend and wanting to invest it in their lifestyle, whether it’s being close to public transit or on amenities,” Lee said.

The firm’s luxury-rental bet is also fueled by the belief that many employers will adopt hybrid or flexible policies for returning to office. “If you’re working from home one or two days a week, you’re going to want a different apartment and we’ve seen consumer preferences favor properties with more amenities and space,” Lee said.

KKR, which had roughly $28 billion of real estate assets under management as of March 31, has shifted away from mainstream property types such as offices in central business districts, malls and high-street retail, choosing instead to spend time on faster-growing segments like warehouses and single-family rentals. Those thrived during the pandemic and are expected to remain in demand.