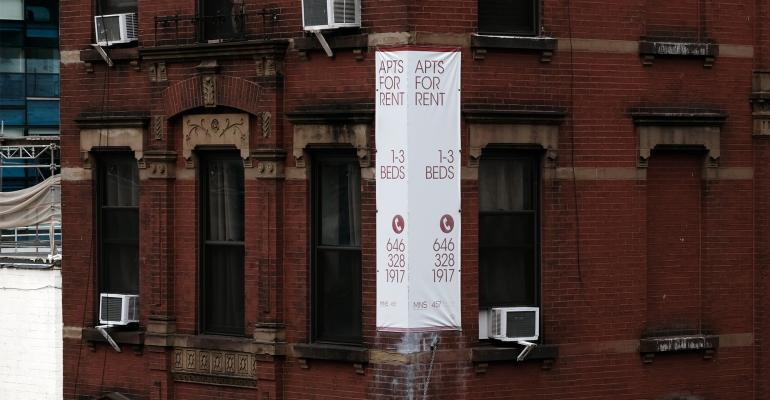 Developers are still building plenty of units in New York City, but the rental market remains tight with thousands of rent stabilized units held off the market.

For the most part, New York City is getting back to its normal ways after the coronavirus pandemic. Broadway theaters are packed. The dining scene is buzzing. And, of course, fights about the age-old issue of rent stabilization within the city’s multifamily stock are back as well.

At one point, apartment rents dropped sharply during the pandemic. Desperate property managers offered up to four months of free rent at many luxury, apartment towers. Many who could work remotely moved away from New York to cheaper, warmer towns.

But demand for apartments came roaring back in the recovery from the pandemic, erasing those concessions and sending rents skyrocketing again. The equation flipped and suddenly prospective renters found themselves in bidding wars. With rising rents, city property owners and housing advocates are once again fighting about New York’s rent stabilization laws. Lawmakers just toughened the law in 2019, but advocates say some property owners are still finding ways to get apartments out of rent stabilization—keeping the much-needed affordable apartments empty in the meantime.

Apartments rents in the New York metro area rose 20.9 percent over the blazingly hot 12 months that ended in the second quarter of 2022, according to RealPage.

“We saw a huge increase in rental prices over the last year, maybe catching up from the pandemic and even going beyond that,” says Brendan Cheney, director of policy and communications for the New York Housing Conference.

Rents are likely to keep growing quickly in New York City, making up for a period during the pandemic during which rents even fell for a stretch. Rents grew 3.0 percent in the third quarter of 2022 alone, according to RealPage. And more of New York’s apartment were occupied (98.1 percent) in the third quarter of 2022 than in any of the other top 50 U.S. markets measured by RealPage.

“There is not a very strong trend except consistency,” Cheney says.

The developers now taking out new building permits don’t seem to be worried about the huge number of apartment projects that will finally open, after long delays caused by shortages of materials and labor. Builders had nearly 45,000 market-rate apartment units underway in metro New York-White Plains as of the fourth quarter of 2022, according to RealPage.

That’s up from about 18,900 in 2019. Developers are even building those apartments in the same places. Brooklyn is still the busiest submarket, followed by Queens and South Westchester County. “The rank of submarkets by construction volume aren’t drastically different today versus five years ago,” says Carl Whitaker, director of research and analysis for RealPage.

Developers keep returning to New York City despite the always-rising cost of land and construction and even the recent expiration of a vital exemption from the City’s high property taxes (J-51), which may or may not be renewed.

As rents rise, property owners and housing advocates are once again fighting about New York’s rent stabilization laws, toughened by the Housing Stability and Tenant Protection Act of 2019, to make it nearly impossible for property owners to take apartments out of the program.

The report set off alarms for New York housing advocates. Empty apartments can still leave rent stabilization in certain situations. Units can be merged if they are next to each other—setting a new record, according to examples published by the End Apartment Warehousing Coalition. A vacant empty rent stabilized building may even, potentially, be demolished.

The number of vacant rent stabilized units dropped to 38,621 as of April 1, 2022. That’s back to the level of 2017 and 2018 when 39,000 apartments were vacant according to HCR. State officials said most of the vacancies 2021 were in larger buildings with property tax exemptions—and apartment rents averaging over $4,000 a month. AirBNB hasn’t helped matters either. In May it was reported that there were more apartments listed on that site than there were apartments for rent.

But the issue of owners “warehousing” apartments they hope to take out of rent stabilization now has the attention of housing advocates. Reporters of local magazine “City Limits” visited several buildings in gentrifying neighborhoods where apartments owned by investors were held off of the market for mysterious reasons.

U.S. Supreme Court challenge the 2019 rent stabilization law. They claim that many rent stabilized apartments need work, such as lead-paint remediation, that is too expensive to complete now that the 2019 law won’t allow them to raise rents to pay for it. Most of New York City’s rent stabilized apartment are at least several decades old, according to Whitacker. Many were built in the mid-20th Century, or even earlier.

“Bringing that unit up to market is too expensive to be paid for from with the regulated rents,” says RealPage’s Whitaker. “Many of those units remain vacant for a long, long period of time.”