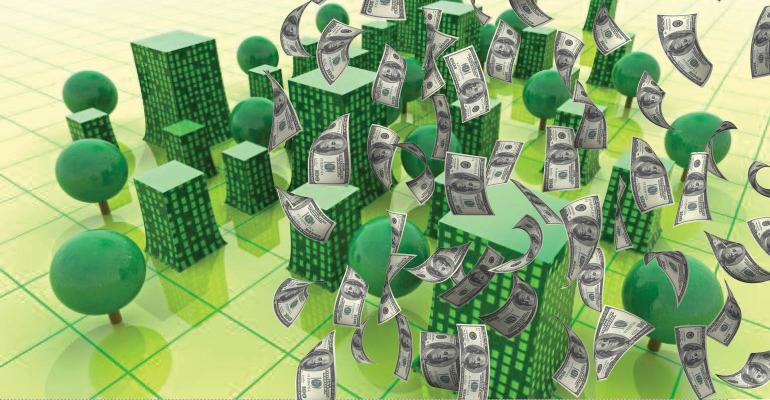 Multifamily borrowers will have to do a lot more in 2019 to get the lower interest rates offered by Fannie May and Freddie Mac’s popular “green” lending programs.

“In this rising interest rate environment, people are going to want to lower their interest rates in whatever way they can,” say Blake Cohen, senior director, equity, debt and structured finance, with real estate services firm Cushman & Wakefield.

Borrowers have been very interested in the green programs, which can lower the fixed interest rate on permanent loans for apartment properties by as much as a quarter of a percentage point. In exchange for the lower rate, borrowers commit to renovations likely reduce energy or water consumption at the property.

Borrowers rushed to get these lower interest rates in 2018, even though federal officials toughened their standards for the loans. The bar will be even higher in 2019.

Demand for Fannie Mae and Freddie Mac’s green loans is likely to remain high in 2019, despite the tougher standards.

“We don’t believe it will have a major impact on volume,” says Phyllis Klein, multifamily vice president for production at Fannie Mae.

In 2018, borrowers had to pledge to reduce energy or water consumption at their properties by 25 percent in order to qualify for the loans. That was a big increase from the 15 percent cut required to participate in the program in 2017, the first full year of the green lending programs.

From the start of 2018 through the end of October, borrowers took out $16 billion in loans through Fannie Mae’s Green Rewards program for apartment properties. Despite 2018’s tougher standards, that’s roughly equivalent to the year before.

Freddie Mac’s Green Up lending program for apartment buildings has also succeeded in 2018, despite tougher standards. Borrowers are on track to exceed the $18.7 billion in loans they took out in 2017. That’s over a quarter of the total $73 billion in apartment loans purchased by Freddie Mac from loan originators in 2017.

In exchange for saving energy and water, agency lenders offer interest rates to borrowers that can be as much at 30 basis points lower than conventional financing. The size of the discount depends largely on the competition to make loans and the demand for financing.

In 2019, to participate in the green lending program, borrowers will need to cut the water and energy used at their buildings by 30 percent. More importantly, half of that reduction will have to come from energy conservation. In the past, borrowers have focused the vast majority of their efforts on water savings. That makes sense because renovations to conserve water are often relatively cheap to make.

“The program largely moved to be a water program,” says Peter Giles, vice president of production and sales at Freddie Mac.

Reducing the energy needed to light and heat an apartment building is more difficult, though not impossible. The average building that uses Freddie Mac’s green financing was built in 1989, for example, and can often benefit from fixes like new windows and a little extra insulation. Even relatively simple renovations such as more efficient LED light fixtures and smarter, programmable thermostats in the apartments can save a large amount of energy, often benefiting residents who pay their own electricity bills.

“This is a way to reduce tenants’ costs. We think we are doing some real good,” says Giles.

The green lending programs also help Fannie Mae and Freddie Mac dominate the business of lending on apartment properties, despite the limits imposed on how much they can lend by the officials at the Federal Housing Finance Agency. For 2019, they will be allowed to purchase a total of $70 billion in apartment loans from loan originators—an average of $35 million per loan. That’s the same limit as in 2017. However, green loans and loans on affordable housing properties don’t count towards those limits. As a result, Freddie Mac and Fannie Mae’s total volume of apartment lending in 2017 reached nearly $140 billion.

“They appear to be on pace to match that 2017 total,” says Cushman & Wakefield’s Cohen.