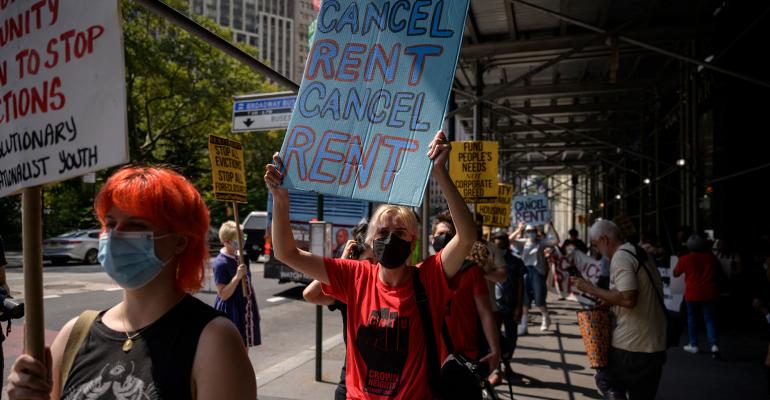 Currently, as many as 3.5 million households are behind on rent, with landlords owed as much as $17 billion.

(Bloomberg)—Landlords may evict roughly 750,000 U.S. households by the end of the year, as lapsing eviction bans and high demand for rental housing push property owners to remove tenants, according to analysts at Goldman Sachs Group Inc.

Currently, as many as 3.5 million households are behind on rent, with landlords owed as much as $17 billion, the analysts estimated in an Aug. 29 note.

Delinquent renters have been able to remain in their homes during the Covid-19 pandemic, but the Supreme Court lifted a federal ban on evictions last week, and remaining state and local moratoriums are slated to expire later this year.

Congress authorized almost $47 billion in rental relief to compensate landlords for lost payments, but state and local governments have been slow to get the funds to those in need. Meanwhile, shortages of for-sale and rental housing are freeing landlords to rapidly increase rents as properties become vacant.

Rents on newly signed leases in the U.S. surged 17% in July when compared to what the prior tenant paid, reaching the highest level on record, according to RealPage.

A surge in evictions would create new inventory of available rental housing, partially offsetting rapidly rising housing costs, according to Goldman. It may also slow job growth and household consumption, but the implications for public health and Covid-19 infections are probably more severe, the analysts wrote.

--With assistance from Noah Buhayar and Prashant Gopal.