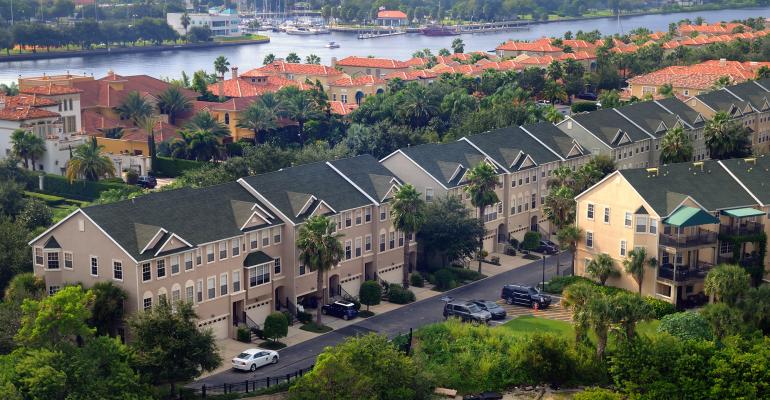 Because of the strength of the state’s multifamily market, investors are targeting Florida in a big way.

Nationally, multifamily occupancy rates decreased 50 basis points year-over-year in the third quarter of 2020, while effective rent prices decreased by 1.3 percent. However, in Florida, the opposite happened. Multifamily properties remained at the same pre-pandemic occupancy level of nearly 96 percent and most markets saw rent increases of just over 1 percent.

The exceptions being Miami and Orlando where the economy is heavily influenced by international travelers. Yet, even those cities saw only modest declines. In fast-growing cities like Tampa and Jacksonville, multifamily occupancies reached 95.9 percent and 96.1 percent at the end of 2020 and effective rent price growth accelerated to an annually adjusted 3.1 percent and 3.3 percent, respectively.

Comparatively, rent prices in well-known larger markets have seen significant declines, some as much as 5.8 percent, with the average being between two and three percent. While these cities also showed occupancy rates hovering around 94-95 percent, many saw a decrease in occupancy of roughly 1 percentage point from the previous year.

Related: 20 Markets Where Apartment Rents Will Likely Grow the Most in 2021

Around Florida, properties have also traded hands for top dollar despite the broader economic challenges facing the economy.

In December 2020, Emera Port Royale in Fort Lauderdale sold for $180 million, marking the largest multifamily deal of the year in the state. With 555 high-end units, the property traded for an impressive $324,324 per unit. Lexin Capital also acquired The Jamison, a 315-unit luxury apartment in Kissimmee, in February for $70.8 million, a healthy $225,000 per unit.

The strength of the Florida multifamily market can be attributed to a number of factors.

People are leaving big cities in droves for more desirable locations like Florida.

PwC’s Emerging Trends in Real Estate 2021 report highlighted what they are calling the Great American Move. The report found that many people ages 30-49 are making a mass exodus from big cities like New York City and Chicago, and moving to markets in the Sun Belt like Phoenix, Salt Lake City and Tampa.

These cities offer housing at lower costs and less exposure to industries affected by the pandemic, which is important to people in this demographic as they grow their families.

Many people in this demographic also tend to be renters by choice, choosing a high-end apartment over a starter home because of the flexibility it offers. On the other end of the age spectrum, baby boomers have considered or are selling their homes in major markets across the country to move into luxury rentals that feel more like suites in a five-star hotel.

Companies are also moving their operations to Florida.

When it comes to commercial real estate, all product types are fueled by population growth and job growth—and Florida has those two trends going in a major way. With no state income tax and a relatively low cost of living, more companies are moving their operations to Florida.

Earlier this year, Pfizer announced its plans to open a ‘global capability hub’ in Tampa, leasing more than 100,000 sq. ft. of office space in the growing downtown market, which will bring with it 600 new high-wage jobs. That’s in addition to the more than 70 financial firms that have relocated from New York City to South Florida over the last three years, including hedge fund giant Elliott Management who announced in October they are moving their headquarters to West Palm Beach.

Announcements like these continue to happen across the state, fueling population growth that is driving multifamily demand.

Florida also boasts a diverse mix of industries—from tourism to professional sports, finance, medical, aviation, logistics, and even technology. This diversity has helped the state weather the COVID-19 pandemic and remain resilient in the face of a national economic crisis.

People aren’t leaving the multifamily market. They are moving within it.

Prior to the pandemic, there was a great deal of Class A multifamily development happening in the urban core, which is attractive to young professionals seeking the live-work-play lifestyle. However, as states enacted local restrictions to mitigate the spread of COVID-19, the vibrancy of the urban core faded somewhat.

Some renters who were paying top dollar to live in amenity-rich apartments downtown decided they didn’t want to pay top dollar after the amenities closed down. At the same time, the new reality of work-from-home made living close to the office unnecessary.

This led to some decline in occupancy at downtown class-A locations, but it’s important to note that these people aren’t leaving the multifamily market. In fact, a significant number of residents of both class-A and class-C properties are moving into class-B properties, which are thriving. And although the leading edge of the millennial generation is migrating to the suburbs to start families in large numbers, the idea that urban living is dead is simply false.

The urban core may be down but it is not out.  It will come right back as coronavirus drifts away led by the younger millennials and then Gen-Z behind them, which have huge numbers in their own right.

Because of the strength of the state’s multifamily market, investors are targeting Florida in a big way, but there isn’t enough product for sale to meet buyer demand. In fact, we’re seeing 20 to 30 interested buyers for every property that hits the market.

And despite record sale prices, investors are hesitant to sell because it’s difficult to find an investment that performs as well as multifamily right now. Cap rates in many Florida markets have compressed to 4 percent for class-B product and even into the mid- to upper-3 percent range for class-A offerings.

This has certainly added fuel to the fire for new multifamily development. Currently, we’re seeing most development happening in the suburban markets. However, this has less to do with COVID-19 and more to do with the scarcity of quality locations in the urban core after 10 years of active development.

In Orlando, for example, American Landmark Apartments recently broke ground on a $78 million class-A apartment community that will bring 365 units to market 10 miles south of downtown. Developers Terra and New Valley have also broken ground on Natura Gardens, a 27-acre community that will add 460 garden-style apartments in northwest Miami-Dade.

While some might worry about the risk of overbuilding, that sentiment is not shared by the developers themselves who will almost all tell you that they can’t build these properties fast enough. Unfortunately for them, there are several factors that are self-regulating the market, including lumber prices, which have increased a staggering 280 percent from the onset of COVID-19, and municipalities who have instituted punitive policies that discourage development.

In Osceola County, for instance, multifamily impact fees are north of $20,000 per unit, which means the government makes more on the deal than most landowners.

Tips for investing in a hot market

With the market so hot, there is certainly a risk that we may be experiencing a bubble.

Bubbles eventually pop, and while experts remain optimistic, there is no way to predict the future. With this in mind, it’s important for multifamily investors to manage their risk and stay disciplined.

Investors should remain diligent in their vetting of properties and continue to only do deals that work for them. In other words, don’t get into a bidding war for a property that doesn’t make sense when you work the numbers.

The good news is that even with record pricing on deals, smart deals can be done with today’s low interest rates and increasing rental rates.

Current multifamily owners should also take a look at pricing in this frothy market and consider selling. Especially if they have concerns about where taxes are headed. If you’re willing to sell, you’ll likely be able to do so for a number that far exceeds any of your past projections.