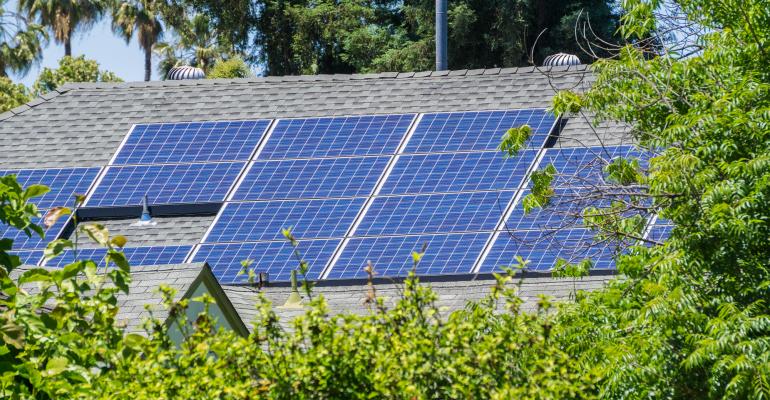 (Bloomberg)—The subsidy that helped make residential solar affordable and mainstream in sun-kissed California may have reached its limit.

The state’s biggest utilities are calling on California regulators to reduce the credit customers get for excess electricity they transmit to the grid from their rooftop panels. The utilities, along with consumer advocates and even some environmentalists, contend the incentive makes solar cheaper for those who can already afford the systems but drives up power bills for those who can’t.

Solar companies are pushing back, saying slashing the incentive too much and too quickly will decimate the market for rooftop solar and hobble the state's efforts to fight climate change. The industry supports a gradual reduction of payments for many, and balks at being characterized as an accessory for the rich. The debate will test California's commitment to a policy that's done wonders for the state's transition to clean energy.

By most accounts, the state’s rooftop solar-incentive program has been wildly successful since its inception in the mid-1990s. California—easily America’s biggest solar state—now has more than 1 million panel-topped rooftops, achieving a goal set by former Republican Governor Arnold Schwarzenegger. The incentive, called “net metering,” pays solar-clad homes the full retail price of electricity for any excess power they export to the grid.

“Low-income customers and renters are forced to subsidize solar adoption by higher-income customers and homeowners,” said Matthew Freedman, an attorney with The Utility Reform Network, a consumer advocacy group. “The result is a reverse Robinhood effect that is profoundly unfair and economically regressive.”

That view echoes a longstanding argument made by utilities PG&E Corp., Edison International’s Southern California Edison and Sempra Energy’s San Diego Gas & Electric, but hasn’t previously gained traction with state regulators. Could this year be different? Will new voices—including the Natural Resources Defense Council—knocking on the doors of state regulators make a difference? This much is clear: the cost of rooftop systems has fallen, power prices—already among the highest in the country—are surging, and there’s increasing sensitivity about equity and environmental justice.

“We’ve got to reform the program for the fairness of everyone,” said Kathy Fairbanks, a spokeswoman for Affordable Clean Energy for All, a coalition of utilities and other groups organized to advocate for changing the solar incentive program. “We are unnecessarily making solar more expensive than it needs to be.”

The solar industry contends the utilities are fighting net metering to protect their monopolies and stifle competition from clean-power providers. “The real story is that the utilities are trying to scapegoat solar for rates going up,” said Meghan Nutting, executive vice president of government and regulatory affairs at rooftop company Sunnova Energy International Inc., who attributed rising power prices largely to wildfires, utility profits, and transmission and distribution costs. “If they erase rooftop solar, who will they blame for rising rates then?”

Both sides say they are advocating for low-income Californians. The rooftop sector disputes the notion that residential solar is only for the wealthy—and that net-metering benefits the rich at the expense of poorer communities. Some in the industry want net-metering rates to remain the same for low- to middle-income Californians—the people, they said, most in need of bill savings.

“We have recently seen so much greater access to rooftop solar,” said Suzanne Leta, head of policy and strategy at SunPower Corp. “The last thing we want to do is change the trajectory so dramatically that we reverse the trend.”

The utilities propose slashing rooftop payments to a rate closer to the wholesale cost of large-scale renewable power—electricity that typically depends on transmission lines. They also are seeking a monthly grid connection charge of about $70 per new solar home.

“That is so over the top that it would kill the market overnight,” Bernadette Del Chiaro, executive director of the California Solar & Storage Association, wrote in an email of the proposed grid-connection charge.

A decision could be made later this year. Michael Weinstein, an equity analyst at Credit Suisse Group AG, anticipates a revised rooftop program will include some tweaks, including a possible small grid-access fee, but not big cuts to rates. “At the end of it, we still think there will be a compromise made—something that does not harm California's own goals for rooftop solar.”

The fight over the rooftop incentive is also being aired in California’s state capitol. Lawmakers there are weighing a union-backed bill that would sharply reduce payments for excess solar energy and require solar users to pay monthly grid-connection charges. The bill recently advanced out of a committee in the state assembly. Del Chiaro’s group said this, too, would bring rooftop solar and storage in the state to a “screeching halt.” Analysts at Roth Capital Partners said in a note this week that the bill is unlikely to take root.

The dispute over net-metering comes as California utilities are poised to hike electrical bills even higher to cover the billions of dollars that they’re spending to bolster a fragile power grid that’s sparked catastrophic wildfires and led to the 2019 bankruptcy of PG&E.

“There are everyday people making investments in the power grid through rooftop solar and storage,” Leta said. “Those same investments benefit the grid and all ratepayers regardless of whether they’re making the investments directly because it provides the resiliency that we all need in the state.”

But some environmental advocates worry that if the solar incentives continue unchanged, it will continue to raise the cost of electricity for those who don't have solar. And they worry that if electricity becomes too expensive, it could undermine the state's other climate goals such as using green power to fuel cars and electrify buildings.

“We really need to think about the equitable distribution of our environmental policies,” said Mohit Chhabra, a senior scientist at the NRDC. “So if we are subsidizing something, who gets the benefits of it and who is getting the costs, and why?”