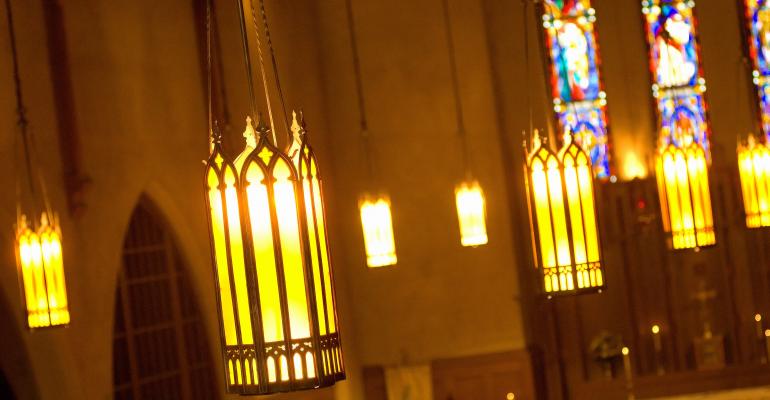 Since the 1970s, St. John’s Global Ministries of the Kingdom, a 93-year-old Baptist church in Queens, has sought to build a new church and develop an unused lot.

Now, with the help of the Local Initiatives Support Corporation NYC (LISC), a local affordable housing group providing technical assistance to the church and four other faith-based groups through a new program, that dream could become a reality. Requests for proposals from developers to partner with the church to build affordable housing, community space and a new worship building are due by the end of the month.

“The congregation is excited about building, and about the possibility of finally getting a brand-new church edifice,” Apostle Lawrence Dorsey says.

What’s happening in Queens is similar to a trend playing out elsewhere around the country. Increasingly, faith-based institutions are partnering with private developers to develop vacant or underutilized parcels—more specifically, to help bridge the affordable housing divide.

The faith-based arm of affordable housing developer Enterprise Community Partners began about 12 years ago, in a push to get more units of affordable housing on-line and help community groups with free land get the legal and financial resources and the education they need to do so. It has 25 to 30 houses of worship in the mid-Atlantic region that are either actively considering a project or are in some stage of the development process, says David Bowers, vice president at Enterprise Community Partners, head of its Mid-Atlantic office and the program. About six years ago, the company worked with around a dozen faith organizations. “Houses of worship can be tremendous allies and strategic partners in helping to bring more affordable housing,” Bowers says.

David Goldstein, managing partner at affordable housing and community development law firm Goldstein Hall in New York City, says his firm, which partners with LISC, has been working with faith-based groups for years. He started noticing an increased push for such partnerships about three years ago—a trend that has ramped up even more over the past year. “The idea was, how do you try to find additional land without potentially having to pay a premium?” Goldstein says.

Some of the deals his firm works on are straight sales, and faith-based groups use the money to support their missions. Goldstein says this is more common in Manhattan, where land is scarce and highly valued. But many institutions want to take part in these ventures to fill a need in their communities, and they see their land as a way to do that, he adds.

The need for affordable housing is apparent throughout the United States. It was one of the reasons the Lutheran Church of the Cross in West Fargo, N.D. partnered with Beyond Shelter, a local non-profit affordable housing developer, and the YWCA Cass Clay, which aids women and children who suffer from domestic violence, to develop the vacant green space adjacent to the church.

The church’s pastor, Joel Baranko, says there were many opportunities to sell the land and turn it into a light commercial or market-rate apartment complex. But the church had a broader vision for lasting change. Baranko says he met with the head of the YWCA Cass Clay, CEO Erin Prochnow, and learned how dire the affordable housing needs were in the Fargo-Moorhead area, where flood-protected land—like the church’s—is at a premium.

“We know that affordable housing is difficult to come by,” Baranko says. “We also just knew that there’s often talk in the wider community—both the homeless shelter or the YWCA are full or beyond capacity.” The YWCA Cass Clay has seen the number of children it serves increase by 8.0 percentage points from 2016 to 2017, notes Prochnow. Last year, 153 women and children applied for the program, but the group could accept just 22 participants.

The project, which will be called Grace Garden and offer 30 units of affordable, permanent supportive housing to women and children, is the first partnership developer Beyond Shelter has undertaken with a faith-based group, says Dan Madler, CEO. But he notes that there are acres of land underutilized by many faith-based organizations throughout the region. “The Grace Garden project is unique in the fact that it could set the foundation for additional opportunities in the future,” he says. The YWCA Cass Clay will administer programs to help the residents, the church will retain ownership of the land and a third-party operator will manage the property.

Madler, Baranko and Prochnow so far have described the process as positive. But there has been a learning curve, particularly as the church has never developed before. For example, Madler notes that the church’s 2,100-member congregation, in a simple majority, must ultimately approve of the terms of the deal. “That’s a different process you have to plan for,” he says.

Sometimes, the issues at hand may be a lot bigger. A resident sued the First Baptist Church of Clarendon, Va. in 2010 after the church partnered with the County Board to build a new worship space with apartments—most affordable—on top, according to The Washington Post. The resident alleged that the $48 million in county and state loans and federal tax credits were paying for a redevelopment that would make the church, which saw other legal challenges as well, richer. A judge dismissed the complaint.

These challenges and questions are reasons why groups like Enterprise Community Partners and LISC—the organization helping the St. John’s Global Ministries of the Kingdom in Queens—have stepped up to help faith-based organizations, which often have zero real estate experience, navigate the complex and risky process of affordable housing development.

LISC’s New York Land Opportunity Program (NYLOP) formally launched in the fall of 2017, heeding a call from state and city officials to help find land for affordable housing and assist faith-based groups receiving pitches from developers. While so far NYLOP, which seeks to assist all mission-driven groups, is only offered in New York, there are initial talks to expand the program elsewhere, says Grace Chung, community development officer at LISC’s New York City office.

The program received 19 applications, and LISC officials selected five organizations to get targeted technical assistance for their projects, which vary in scope and will be publicly financed to some degree. “The core idea here is to put these churches in the driver’s seat, in terms of setting the vision of what the site can be,” says Sam Marks, executive director of LISC’s New York City office.

Dorsey credits LISC with helping St. John’s Global Ministries of the Kingdom make its dreams of development a reality. The church had failed attempts in the 1970s to build a new church and in 2001 for a new church and daycare center. “We didn’t know fully what we were doing, but we ventured into it,” Dorsey says.

The final product is expected to be a joint venture with the developer—the church will own the new church building and community space, and jointly own the housing component. “Anything that’s going to help the community, going to help the people, always has my attention,” Dorsey says.

Editor's Note: This article has been updated to clarify the first reference of the group assisting St. John’s Global Ministries of the Kingdom. It is the New York City office of the Local Initiatives Support Corporation (LISC). The article also has been updated to correct the number of applications LISC NYC received for its NYLOP program. It was 19.
TAGS: Development News
0 comments
Hide comments
Related
Sponsored