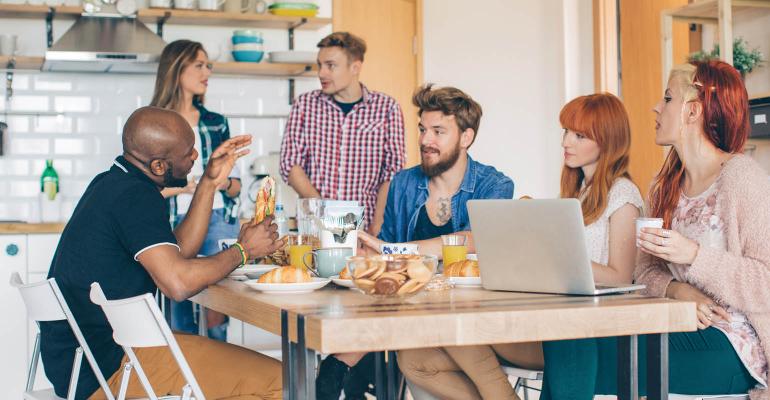 “We are now about four months ahead of our expected pace,” says Christopher Bledsoe, co-founder and CEO of Ollie, the company managing the ALTA’s co-living apartments.

Companies like Ollie are proving that there is plenty of renter demand for co-living arrangements. The co-living spaces at ALTA are now earning more dollars per sq. ft. than the new conventional apartments in the same building. Other operators of co-living properties also report strong results at their projects.

“We can only speak to performance of our OSLO properties… and they have been exceptional,” says Martin Ditto, CEO of Ditto, a company that operates three fully-occupied co-living properties in the Washington, D.C. metro area, and is now planning to open a fourth.

“Co-living” is a living arrangement in which the residents share some aspects of their living spaces with each other. It’s not as radical as it sounds—for Ollie and Ditto’s OLSO brand, co-living typically takes the form of multi-bedroom apartments shared by roommates. For years, the student housing industry has also been building suites that students share as roommates.

“Our product type is a natural evolution of the student housing model,” says Ollie’s Bledsoe.

ALTA LIC opened in May 2018 with 466 apartments. Of those, Ollie is operating 169 as furnished co-living suites with a total of 422 bedrooms. According to Bledsoe, it’s the largest purpose-built co-living property in the United States.

After less than a year in operation, 73 percent of these units are occupied, with renters paying from $1,260 to about $2,200 per month for a bedroom. The higher priced units may be larger, have better view, private entrances off the hallway or their own, un-shared bathrooms.

The cost of a bedroom also includes wireless Internet service and weekly housekeeping services, including bed linen, towels and toilet paper, along with shampoo and hand soap from Malin & Goetz. “It is the convenience of hotel living,” says Bledsoe.

The units are sized for efficiency and come furnished with custom furniture designed by Ollie to make the best use of small spaces. “For us a 535-square-foot studio is a two-bedroom micro-suit… a 750-square-foot one or two-bedroom is a three-bedroom suite,” says Bledsoe.

These co-living suites earn an average of 44 percent more income in rent per sq. ft. than the more conventional 297 luxury apartments at the 43-story tower, according to Bledsoe. The net operating income from these units is also 30 percent higher per sq. ft., even with the extra cost of co-living amenities like the housekeeping service.

In Washington, D.C., Ditto is following a similar model with its OSLO co-living suites. “The current OSLO model is built around multi-bedroom units with bathroom parity; however we are evolving that program as the concept is scaled,” says Ditto.

“There are many variations under the co-living banner, with different levels of communal living,” he adds. On the far end of the spectrum is co-housing, where all of the residents are expected to share in the community’s responsibilities, including cooking, yard work and childcare. So far, these arrangements are a relatively small part of the overall market for rental housing.