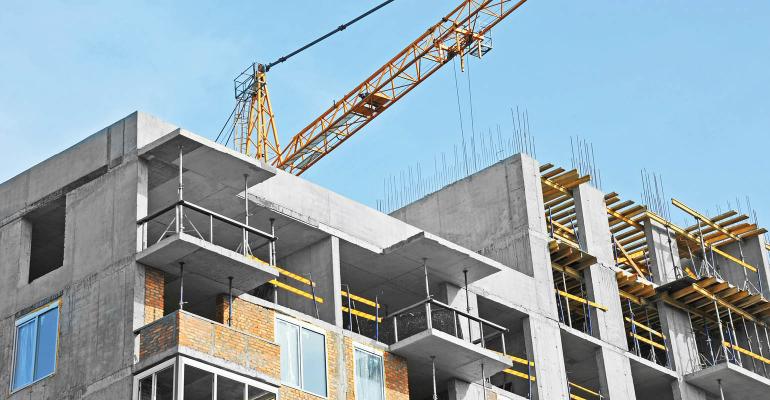 Apartment developers are paying more interest on their construction loans—but that isn’t keeping developers from planning and financing new projects.

Despite rising interest rates and the nagging anxiety that developers are already building too many apartments in some markets, banks remain active lenders for multifamily construction projects.

“There is certainly no shortage of capital,” says Danny Kaufman, managing director in the Chicago office of HFF.

Apartment developers are paying more interest on their construction loans—but that isn’t keeping developers from planning and financing new projects.

“People have been predicting rates rising for 10 years—now it is finally happening,” says John Kelly, senior vice president and partner in the Boston office of CBRE. “But the cost of capital has not become an inhibitor of overall development.”

The most important force pushing interest rates higher has been rate hikes from the Federal Reserve, which have had an immediate effect on the 30-day London Interbank Offered Rate (LIBOR), the benchmark rate for most construction loans. LIBOR had risen to 2.5 percent in the first week of January—its highest level in more than a decade. That’s up from 1.56 percent the year before. For years of the long, slow recovery, LIBOR stayed below 0.25 percent. LIBOR only began to rise at the end of 2015 when Federal Reserve officials began to raise their own target interest rates.

Lenders passed much of the increase on to borrowers. The difference, or spread, between LIBOR and the floating, all-in interest rate on construction loans typically ranges from about 275 to 325, for loans that cover 55 percent to 65 percent of the cost of a development project. “The mid-200 range is as aggressive as we see,” says Kelly.

Higher interest rates put pressure on deals, cutting into the profits of developers—developers are still able to finance new deals, if they can find a site to build on where the demand is still strong enough to support more new development.

Borrowers can also find lenders eager to provide construction loans—if they ask enough possible lenders. “It is important to go wide and deep,” says Kelly. “The biggest challenge is finding the lenders that have the bandwidth to put construction on the books.”

The set of lenders who are willing to lend is constantly changing, as banks take new loans onto their balance sheet and older construction loans get paid off. To find construction financing for a particular project, borrowers and their brokers might contact 50 lenders and receive expressions of interest from about half, which might turn into about a dozen solid offers of construction financing.

Banks have limits on how much they can lend to construction projects. Over the last few years regulations have finally come into effect like the international Basel III rules, which limit how many risky investments banks can hold on their balance sheets. “The rules have affected the cost of capital for banks—but everyone is used to them now,” says Kelly.

However, every time a developer pays off the construction loan on a completed and stabilized apartment property, the lender has the capital and can potentially lend it out again to a new apartment project.

“There is no one that we have crossed off of our list… next week they might have a new appetite to lend,” says Kelly.

Lenders are also used to worries developers have already built too many apartments—particularly in submarkets like the central business districts of certain cities and towns. However, occupancy rates are expected to average close to 95 percent in 2019, and overall rents are expected to continue to grow. So the overall sentiment for the multifamily sector remains bullish. In that context, banks are used to underwriting each proposal to build apartments on its own merits, based on the strength of each sponsor and the local balance of supply and demand for apartments.

“The most overbuilt markets get the most scrutiny,” says Kaufman.

Riskier plans to build new apartments can also turn to debt funds for construction funds. These funds have been created for private equity fund managers to provide shorter capital to real estate properties—such as bridge finance and construction financing.

These loans can over up to 75 to 80 percent of the value of a property, with interest rates often floating at 275 to 300 basis points over the 30-day London Interbank Offered Rate (LIBOR). “They are generally in the larger deals – costing more than $150 million,” says Kaufman.

Often debt funds lend alongside a bank that provides a conventional construction loan. In this case, the debt fund provides a mezzanine loan to pushes the leverage the of the loan package up to a total of 80 percent or even 85 percent of the total cost of the developer.