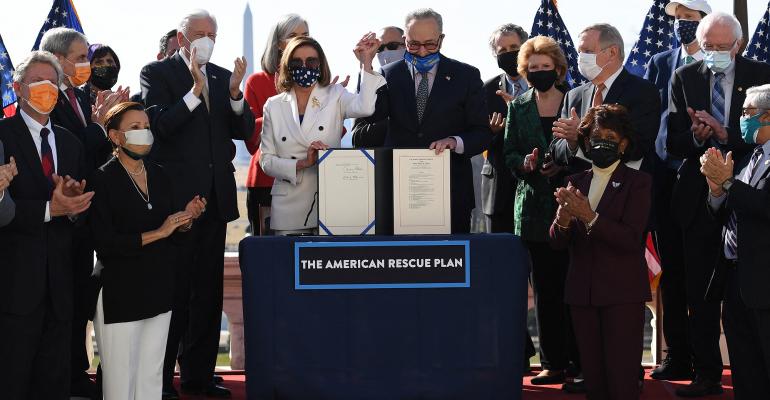 COVID-19 Relief Throws a Lifeline to Renters and Small Landlords

Between direct payments and renter aid, the American Rescue Plan Act is providing a needed boost to struggling apartment dwellers and landlords.

Millions of renters missed payments because of the chaos caused by the coronavirus pandemic. They had often missed several months—racking up thousands of dollars of debt, on average, for a total of $57 billion across the U.S., according to an analysis of Census data.  That strained the budgets of the apartment properties where these renters live—often small properties with just a few units apiece run by small investors who own just a handful of properties.

Congress threw these renters and their landlords a lifeline with the $1.9 trillion American Rescue Plan Act, signed by President Biden earlier this month—and that is in addition to help already included in the last coronavirus relief bills.

“We are optimistic… Now there are two bills in succession with more than $50 billion of renter assistance,” says Brendan Cheney, director of policy and communications for the New York Housing Conference. “That will get us a long way.”

Relief laws provide a lot of money, just in time

More than one in six renters—10 million in all—were behind on their rent payments and at risk of being evicted as of late December, according to the Household Pulse Survey from the Census Bureau. That’s three times the typical rate. Even more renters—a total of nearly 18 million renter households—told the Census they had little to no confidence they would be able to continue making their rent payments on time. The typical delinquent renter was almost four months and $5,600 behind on their monthly rent and utilities, with another $50 per month of late-payment penalties.  All told, this comes to about $57 billion in total owed by those behind on their monthly payments, according to an analysis of the Census data by housing economists Jim Parrott and Mark Zandi.

“The system could not have weathered this for much longer,” says Cheney. “It would have been a crisis for tenants and workers and landlords without this back rent.”

Most of these renters in trouble are concentrated in smaller apartment properties. These renters have relatively lower income, pay a lower rent and tend to work in industries more vulnerable to COVID-19, according to the Urban Institute. A lot of these smaller apartment properties are also concentrated in older, gateway cities like New York City and Los Angeles.

“I have heard from owners… They say ‘I have residents who say they can’t pay. They’ve been with me so long,’” says Richard Katzenstein, senior vice president and national director of Marcus & Millichap Capital Corp.

In contrast, the vast majority of renters at professionally-managed apartment properties kept paying rent. For example, the vast majority of households—93.5 percent—made full or partial payments of rent in February 2021 at the 11.4 million professionally-managed apartments included in the National Multifamily Housing Council (NMHC)’s Rent Payment Tracker. That’s only slightly lower than February 2020—before the crisis caused by the pandemic took hold.

That makes sense. The Rent Payment Tracker collects much of its data from leading property management software systems—and the properties that use this software tend to require prospective tenants to show significantly more income than their rent. In contrast, housing advocates says that nearly half of renters pay more than 30 percent of their income towards rent—and many pay close to 50 percent.

The owners of the smallest rental properties—with just two to four units—may be well-positioned to help their renters access these programs.

“Those very small property owners, they actually do know those residents. They have become somewhat friendly and they know they cost of eviction,” says Leslie Hyman, founder and CEO of Circa, a technology company focused on rental payments based in Westport, Conn.

However, housing advocates worry that small landlords who own a few more apartment units—20 to 50 units perhaps—may not be as accommodating. “They are not friends with their residents and they are not tech savvy,” says Hyman. Sometimes owners like these view steep late fees and eviction as a regular part of doing business and do not take the time to hear their renters’ situation. “You need to hear their story so that you can create a plan for them to pay,” says Hyman.