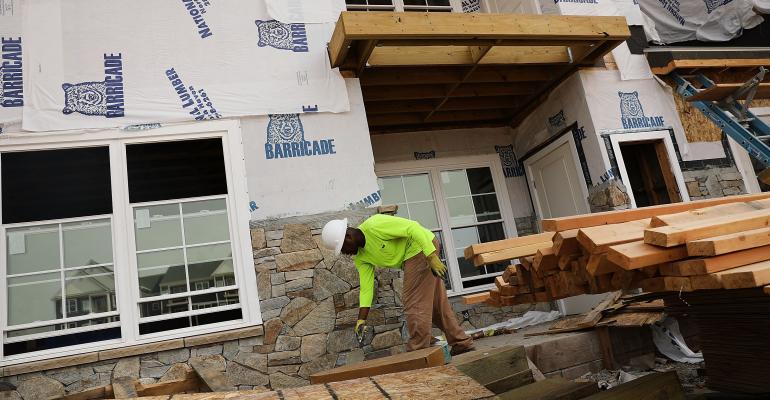 Construction Loans Not Hard To Find for Multifamily Projects

Though the terms are getting tougher, banks continue to put more money into apartment construction.

Apartment developers can still get the money they need to build new apartment projects from banks and other lenders. Though the terms are getting tougher, banks continue to put more money into apartment construction.

Banks are troubled by the uncertain fate of regulations like the High Volatility Commercial Real Estate (HVCRE) rules implemented by federal officials. Currently, banks have to set aside more capital than before to offset the risk of investments like construction loans. Despite these regulations, banks continue to lend. And if borrowers don’t like the terms offered by banks, other lenders, including life companies and private equity funds, also continue to offer construction loans.

The total volume of construction loans from banks to apartment and commercial properties grew 9.3 percent over the year that ended Sept. 30, 2017. For example, Citigroup grew its portfolio by 43.09 percent, JPMorgan Chase & Co. by 26.60 percent, according to CoStar.

However, not every large bank is lending more on apartment developments.

“Many of the large banks have been extending financing more grudgingly. Many reached a desired level of exposure to multifamily and are now adding new loans only as other loans of a given client mature,” says George Currall, principal and managing director of capital markets at development firm The NRP Group.

Regional and super-regional banks have been more active than the giants. “We are having the best success with banks in the $30 billion to $75 billion in assets under management range,” says Currall.

But the timing of the loans also varies. “You want to get your debt in the beginning of the year—banks run out of money allocated to real estate as the year progresses,” says Kitty Wallace, executive vice president at real estate services firm Colliers International. That’s particularly true in busy markets for apartment construction. Halfway through the year, lenders may still have money to lend, though they may have made as many loans as they are willing to make in the busiest markets.

Many banks now offer construction loans equal in size to 55 percent to 60 percent of the cost of a development. However, borrowers with very good track records may be able to get higher leverage. “NRP is still getting loan-to-cost in the 70 percent range,” says Currall.

During the last real estate boom, loans totaling 65 percent or 70 percent of the cost of development were much more common. Lenders today are also much tougher about the terms that they offer borrowers. For example, borrowers that bring equity partners into their deals are now often unable to provide their investors with any cash distributions until the properties have stabilized. “For people who require equity on their deals, that becomes tricky,” said Wallace.

However, because the benchmark LIBOR rate remains low, the overall interest rates paid by borrowers remain near their historic lows, says Wallace.

Borrower not satisfied with the terms offered by banks can look elsewhere.

Construction loans offered through the federal Department of Housing and Urban Developments’ 221d4 program can help borrowers who can’t get senior debt or don’t have the credit for a loan from a bank that wants a strong guarantee.

“It is attractive, non-recourse financing. Of course, the program requires prevailing wages and a very patient developer with a long time to execute on the land,” says Currall.

Life company lenders also offer construction loans that combine senior debt with mezzanine financing. The loans can prove to be very expensive compared with more conventional senior debt from a bank lender. The life companies also sometime require a share of the profits from a development, like an equity investor.

Editor's note: The original version of this article inaccurately stated, in paragraph 4, that the volume of construction loans for apartment properties grew by 9.3 percent during the year ended Sept. 30 and, in paragraph 8, that banks with more than $20 billion in assets grew their apartment construction loan portfolios by 15.82 percent during the same period. The figures actually represent increases for loans on both apartment and other commercial properties. We have since updated the article.
TAGS: News Finance & Lending
0 comments
Hide comments
Related
Sponsored