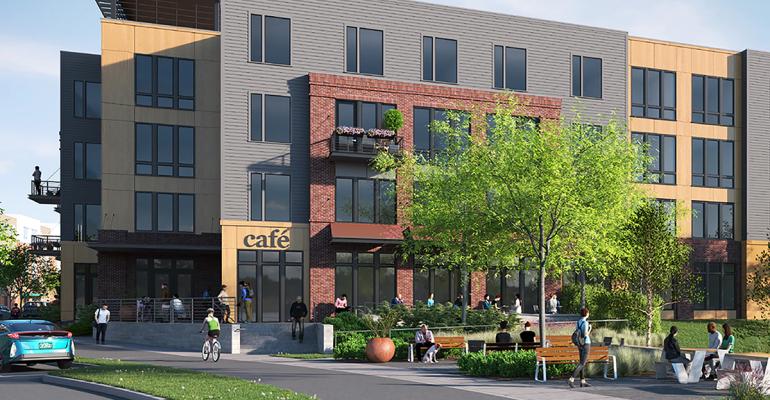 The lack of affordable housing is threatening school administrators’ ability to attract and hire employees. So now the University of Vermont and a number of schools across the country are tackling the housing crunch head-on with a new strategy: building homes targeting faculty and staff.

(Bloomberg)—When Emily Nadeau was offered a post-doctoral fellowship at the University of Vermont’s Larner College of Medicine, it wasn’t a job she wanted to turn down, but she considered ditching the offer.

For six months, Nadeau and her husband canvassed Burlington and nearby towns for a pet-friendly apartment within their $2,200 monthly budget. But by September, a few weeks before her first day of work, Nadeau still couldn’t find a place nearby to live.

“It was horrible -- I cried constantly,” said Nadeau, who spent hours each day scouring rental listings while writing her dissertation from her home in Kentucky. “All of it was making me feel like this was impossible. I legitimately believed that I was going to be homeless.”

Nadeau, like many other home seekers, has been forced to deal with rising housing prices and limited choices. The lack of affordable housing is threatening school administrators’ ability to attract and hire employees. So now the University of Vermont and a number of schools across the country are tackling the housing crunch head-on with a new strategy: building homes targeting faculty and staff.

“People come to Vermont and expect everything to be a lot cheaper, but we don’t have the economy of scale that the cities have,” said Richard Cate, UVM’s vice president for finance and administration.

The University of Vermont plans to invest $22 million in a deal with a local developer to build 295 units of housing, 100 of which would be ready for occupancy in summer 2024 and the balance available in two additional phases with full completion in summer 2026.

Chittenden County, where the school is located, has a population of about 169,000, up 3% since 2019. A surge of out-of-state buyers, often with bigger budgets than locals, descended on Vermont during the pandemic in search of vacation homes. Some scooped up homes that were previously being rented by owners, depleting already tight inventory. The apartment vacancy rate is 0.4%, the lowest in 20 years, according to latest available data by real estate advisory firm Allen, Brooks & Minor Inc. That’s way below the average rate of 1.7% since 2000.

In such a small town, any influx can throw the market out of whack. “If we end up with another 1,000 people, it can completely disrupt the availability of housing,” Cate said.

While rent prices rose 2.7% between 2020 and 2021, an increase cushioned in part by government rent-relief programs, prices are expected to jump over the next year, said Brad Minor, a principal at Allen, Brooks & Minor. That presents a challenge as the University of Vermont tries to grow.

“During the pandemic, Vermont became a pretty hot place to relocate to. We have seen an increase in demand, and the housing stock across Vermont is not keeping up with the desire,” said David Provost, Middlebury College’s executive vice president of finance and administration. “From a standpoint of attracting and retaining staff, we felt we needed to get more involved in the solution.”

Middlebury College, a private liberal arts school about 35 miles south of UVM, bought a 35-acre parcel of land for $1.5 million and plans to develop 100 units of affordable and workforce housing, according to a press release. The school bought the land with working capital, and the developer, Summit Properties, will finance the estimated $40 million project, which will be built over the next six years.

The lowest pay range the school offers staff is from $35,000 to $45,000, that salary would qualify for affordable units in the new housing project, according to Provost.

UVM’s and Middlebury’s plans mark a new strategy in higher education, where need is growing but faculty housing is still rare. Schools in major cities across the country are also taking steps to get ahead of the problem.

In Washington DC, Howard University plans to build a new mixed-use building adjacent to its campus. In partnership with developers, the school will build a 10-story building with as many as 500 residential units to serve students, faculty, staff, and visitors, as part of the university’s plan to build 36,000 new homes by 2025.

Schools that do offer housing for faculty tend to have very little, said Jim Hundrieser, vice president for consulting services at the National Association of College and University Business Officers.

For instance, New York University has owned and managed faculty housing since the 1960s. According to its website, it has a portfolio of 2,100 apartments in large- and mid-sized buildings in the Washington Square neighborhood of Manhattan. That pales in comparison to the 5,050 faculty members NYU has.

It’s difficult for landlords, in general, to scale housing while keeping costs down. On top of that, it can be administratively awkward for schools to decide who gets to live where, and for how long.

“I suspect interest is high, but I know the business model to maintain something that is quality, affordable and attractive for families is challenging,” Hundrieser said.

Some schools haven’t been able to make the math pencil. The University of California Los Angeles, which already offers 191 units of faculty housing, planned to boost its offering by as much as 100 units, with the building set to open this year. But a spokesperson for the school said the project is on hold due to financial impacts of the pandemic.

Recently passed legislation in California aims to alleviate some of the financial burden of constructing homes. The law establishes a revolving loan fund to provide zero-interest loans for building faculty and student housing. It will appropriate $900 million in the 2023-24 fiscal year, and another $900 million the following year.

Meanwhile, similar legislation in Hawaii that would have allowed the state to buy land to build affordable housing with priority given to classroom teachers at the beginning of their careers, failed to pass during the legislative session ended in May.

The demand for more affordable housing is evident. The University of California Los Angeles said it had a wait list of over 100 faculty for its housing when it proposed the expansion in 2019. Meanwhile, annual PhD conferrals in the US, many of whom go on to teaching jobs, have surged nearly 60% since 2000, and are forecast to keep growing over the course of the next decade, according to the National Center for Education Statistics.

Post-secondary teachers’ median annual wage is just under $80,000, according to the U.S. Bureau of Labor Statistics. Entry-level professors often make less. And while housing costs vary in every market, renters spending more than 30% of their annual income on rent each month are considered “rent burdened” by the US Department of Housing and Urban Development. Asking rents in the US were $2,084 in September, according to Zillow Group Inc.

‘No Choice’ But to Build

Housing strain is also vexing K-12 school districts, where faculty tend to earn even less. Troy Flint, a spokesperson for the California School Boards Association, said at least 50 districts in the state have expressed interest in building workforce housing. And in San Diego, voters in November will decide the fate of a $3.2 billion bond measure that would partly fund affordable housing for employees of the San Diego Unified School District.

“San Diego is one of the highest costs of living areas in the country,” said Richard Barrera, a trustee on the district’s board. “We have several teaching positions that are already hard to fill,” such as special education, math and science, he said.

In September, the median rent in San Diego rose 8.4% year-over-year after over 15 months of double-digit growth, according to Realtor.com.

Within two years, it may become clear that schools “had no choice” but to start building home for their workforce, Hundrieser said.

As schools figure out the best way to address their immediate needs for attracting and retaining quality talent, new hires like Nadeau are forced to compromise. She has temporarily left her husband and two dogs back in Kentucky and moved into a studio apartment about 25 minutes from UVM. The couple plans to start looking to purchase a home near the school before the end of the year.

“I kept saying to my boss and my mentor ‘I don’t get it, its Burlington. Why is this so insane?’” said Nadeau. “Everybody was like ‘that’s just the way it is.’”