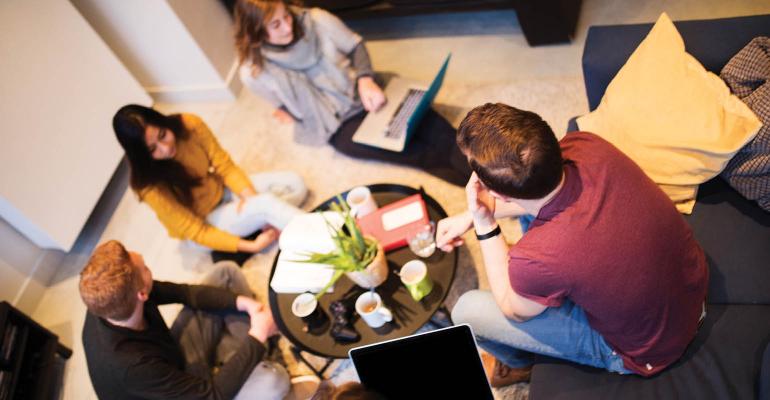 Co-living, one of the hottest trends in apartment investment, has a lot in common with student housing.

"Co-living is actually student housing for grown-ups," says J.J. Smith, president of Chicago-based CA Student Living, one of the largest developers of student housing in the country. The company operates several properties in which the residents are almost evenly split between college student and young professionals.

Co-living is a growing trend in the most expensive U.S. housing markets, where tenants in a single apartment share common areas such as the kitchen. The model is similar to student housing, where students also share suites of bedrooms with shared kitchens. It shouldn’t be surprising that some of the largest co-living developments are filling up with students, especially with graduate students, who have a lot in common with the young professionals who tend to live in co-living properties.

“Graduate students have been underserved—just like young professionals,” says Christopher Bledsoe, co-founder and CEO of Ollie, a co-living provider.

The nation’s largest community built from the ground up to include co-living is Ollie’s Alta+, located in the Long Island City neighborhood of Queens, N.Y., according to Bledsoe. "Around half of our residents are either graduate or undergraduate students. The other half are working professionals,” he notes. The 422 beds at Alta+ include studio apartments and suites of bedrooms rented out to roommates.

CA Student Living has also found that many of its communities are attractive to a broader demographic than just university students. "We have many throughout the country," says CA’s Smith. “The LINK in Minneapolis, which opened earlier this year, has a resident mix of 50 percent student and a 50 percent blend of young professionals and empty nesters.”

Other communities that mix students and non-students include CA’s Uncommon Fort Collins community in Fort Collins, Colo., which opened in the fall of 2018 with 40 percent of its residents being students and 60 percent non-students. CA’s Eleven40, in the South Loop of Chicago, is located near several universities and has a mix of 30 percent students and 70 percent young professionals.

"Setting the right unit mix is critical," says James Jago, managing director of PEBB Capital, a real estate investment and private equity firm with offices in New York City. “We’ve seen many projects designed with all suites with four bedrooms or more apiece, or all micro-studios. While those can certainly be successful, we tend to gravitate towards a more diverse mix.”

A mix of unit types allows a building to serve renters with different needs. For example, in 2020, PEBB plans to open its new building at 415 W. 120th St. in New York City with a total of 153 beds, mixing micro-studios and suites. The building will serve a mix of young, local professionals and students from Columbia University, practically across the street. The Alabama, another building developed by PEBB in New York City, has 175 beds that serve young professionals in addition to students from New York University, The New School and Cardozo Law School.

The demand for these kinds of projects in expensive housing markets is strong. In many parts of the country, both students and young professionals have already proven their willingness to live with roommates or squeeze into smaller spaces. "There is strong demand in urban supply-constrained markets where living with someone else allows a lifestyle by way of roommates that residents may otherwise not be able to afford," says Smith.

"The specific submarket is critical," says Jago. "It’s a non-starter in some markets where rents are low relative to incomes and starter home prices are within reach for those with a low-six figure salary."

The challenge of mixing students and professionals

Some apartment buildings have been mixing students with nonstudent renters for years. "Many multifamily developers with properties adjacent to campuses have always had both student and non-student residents in their communities," notes Smith. "We are hearing more about hybrid product that has always quietly existed.”

However, mixing these two populations can create challenges for property managers. Student housing operates on the academic year, but renters move in and out of conventional apartments all year round. “If you’re a conventional property that is trying to appeal to the students, you’re going to run the risk of over-exposing yourself to a lot of vacancy when those student leases expire in the spring," says Carl Whitaker, manager of data analytics for RealPage Inc., a provider of property management software and services.

Property managers also have to master the different types of units. “It is very difficult and complicated to offer by-the-bed leasing at the same time as joint-and-several, by-the-unit leasing,” says Frederick Pierce, president and CEO of Pierce Education Properties. “The rental rates are often different and so are the lease terms.”

Also, undergraduate students and young professionals often have different needs that can create conflicts, such as noise complaints. “We have found success in segregating students from working professionals by way of separate floors, separate ends of the hallways, different lobbies, elevators and, at times, different amenities,” says Smith.

However, most of the students living at the Ollie’s Alta+ are enrolled in graduate school. Their lifestyle—including their need for quiet and their urge to be social—has been a good fit with the young professionals living at the property.

“Graduate students are not that different from young professionals,” says Bledsoe. “We’ve seen a lot of interest in our co-living spaces from graduate student populations.”