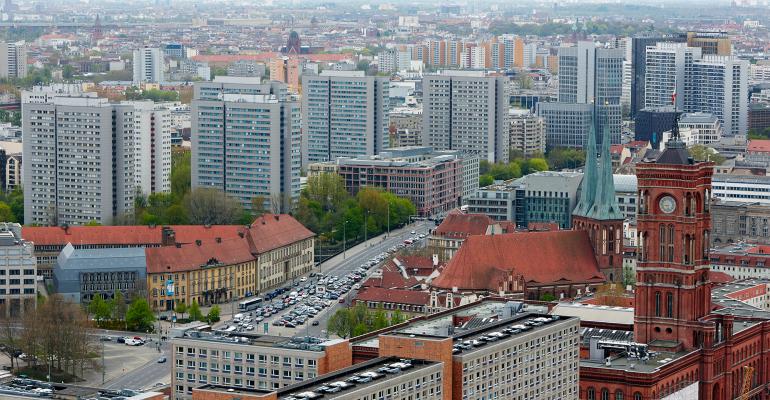 Berlin Voters Back Wresting Apartments Away From Big Landlords

The vote reflects frustration about housing inequality that’s being seen around the world.

The proposal, which got 56% support, could mean transferring about 226,000 apartments into public hands if enacted. That includes those of Deutsche Wohnen SE, which owns more than 100,000 units in the city, and Vonovia SE.

The vote reflects frustration about housing inequality that’s being seen around the world, and which is proving an increasing headache for governments.

In Berlin, where more than 84% of the population are tenants, it underscores the divide between people feeling squeezed out of an increasingly expensive rental market and those who want to maintain the city as a hub that attracts companies, capital and housing investment. It’s unclear whether the next local government will follow through with the plan, which could lead to lengthy legal battles and billions of euros in costs.

The proposal applies to property companies that own more than 3,000 rental units. Deutsche Wohnen said it doesn’t expect that expropriation of flats will happen, and that such a move would be unconstitutional.

The vote coincided with elections for Berlin’s city government, in which the Social Democrats pulled ahead of the Greens -- meaning they’ll get a chance to appoint the next mayor. The party’s candidate, Franziska Giffey, said while the outcome of the referendum must be respected, expropriation won’t create new apartments or solve the wider housing issue.

“It’s a call on the senate to come up with a draft bill and carry out a respective legal evaluation,” she told public broadcaster ARD on Monday “We can’t do it if it’s not constitutional.”

A previous referendum, which sought to keep the popular but comparatively tiny Tegel airport open, also failed to change the ultimate outcome. While Berliners voted in favor of the move, the airfield has since closed.

Since the fall of the Berlin Wall more than 30 years ago, the once-divided capital has morphed into a thriving metropolis attracting companies that offer high-paying jobs. Rents have shot up over the years, and Berlin has estimated that it needs 20,000 new homes annually to accommodate the growing population.

Supporters of the proposal argue that the government is better suited to keep a lid on rising housing costs. Joanna Kusiak, a spokeswoman for the referendum organizers, said the vote puts pressure on politicians to carry out the measure.

“We Berliners have decided that no one must be allowed to speculate with our apartments,” she said in a statement.

But the cost of nationalizing vast amounts of housing is also an issue. Opponents say the price tag would be between 29 billion euros ($34 billion) and 39 billion euros, funds that should be made available for other projects.

Vonovia said Monday that while the referendum is a sign that the housing situation needs to change, expropriation would only make things worse.

“Not a single new apartment would be created and investments in modernization would come to a halt,” the landlord said. Vonovia and Deutsche Wohnen earlier this month agreed to sell 14,750 apartments to Berlin as part of their effort to merge.