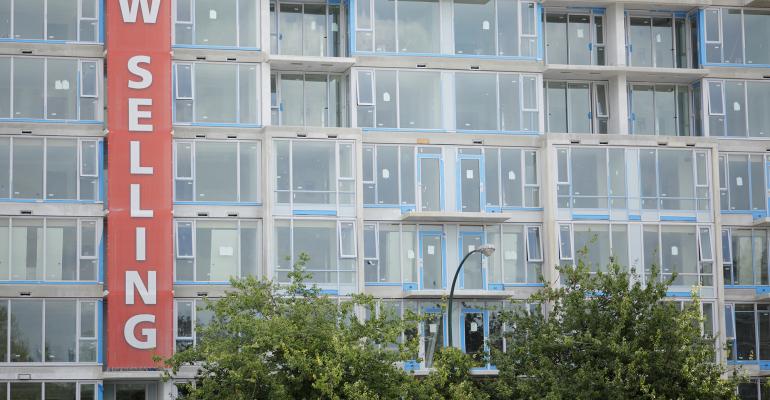 Apartment Investors Wait on the Sidelines

Multifamily investors want to buy properties, but are waiting for clarity on price discovery before pulling the trigger on deals.

It may be months before buyers and sellers understand what apartment properties are worth in an economy hobbled by the spread of the novel coronavirus.

In April, buyers and sellers of apartment properties largely focused on out how to complete deals negotiated before the COVID-19 pandemic led to a near complete shutdown of economic activity. As a result, the number of deals closed was a fraction of what investors had bought the year before.

The economy is now slowly restarting, despite COVID-19 cases still on the rise in many states. Buyers and sellers are assessing the extent of the damage—and what it will mean for property values. The mass wave of unemployment—more than 40 million Americans have now filed in recent weeks—will undoubtedly affect market rents. Until this is all sorted out and there is price discovery in the market, expect investment sales volume to remain low.

“This will not be a V-shaped recovery and there will be long-term effects,” says Andrew Rybczynski, managing consultant at CoStar Group. “Total rent growth at the end of the year is highly unlikely to be as positive as it would have been and vacancy is likely to be higher than at the same time last year.”

“There has been a tremendous decline in transactions,” says Brian McAuliffe, president of CBRE Capital Markets, based in Chicago.

"At this time May appears to have an even more precipitous drop, though there is still plenty of time before those figures are finalized," says Rybczynski.

But in the second half of March, policymakers finally recognized the threat posed by coronavirus and ordered non-essential businesses to close. Few deals were able to to be completed. The usual practice of gathering around a closing table was forbidden and most real estate professionals worked out of home. Simply recording a deed or signing a document digitally was often a problem.

In April, real estate investors were able to complete some of the deals they had planned before the crisis—but at least a few of them didn’t want to.

“There are people that did walk away,” says Jim Costello, senior vice president for Real Capital Analytics.

How many would-be buyers walked away from deals provide a hint of how strong investors expect apartments to be in the recovery from the crisis.

“The lack of busted apartment deals suggests investors are more willing to accept current market prices for these assets than they are for other property sectors where collapsed deals are rising,” according to RCA.

These would-be buyers typically lost the money they had already invested in these broken deals, such as deposits and money spend performing due diligence.

“They would rather walk away from the ‘earnest money’ than complete the deal,” says Costello.

Some would-be buyers walked away because they expect property values to fall. “That is a sign that buyer expectations had changed,” says Costello. Others may have had difficulty closing financing they needed to complete the acquisition, says Costello.

Prices still strong in April, reflecting the market before COVID

The other details of the deals the closed in April—like high prices and low investor yields—are largely relics of the U.S. economy before the coronavirus.

“It’s not clear that deal that have closed in April actually included any information about COVID,” Costello.

Apartment prices kept rising in the first months of 2020 relative to the income from the properties, driving cap rates even lower, squeezing close to 5.5 percent on average in April, according to RCA. Those deals were largely negotiated before the crisis hit—and then largely proceeded on the terms set before the crisis.

For investors to make new deals to buy and sell apartment properties, they will have to agree on what the properties are worth.

“Sellers and buyers are still very far apart,” says Rybczynski. “With the length and levels of the pandemic disruption still unclear… buyers fear purchasing into a long downturn and sellers sit on relatively stable properties with the conviction that their value has not declined that much over the last few months.”

As of mid-May, managers of stabilized apartment properties still had few vacant apartments. The vast majority of renters had made full or partial payments in May, according to data gathered by the National Multifamily Housing Council.

However, it’s not clear how many renters would continue to pay if millions continue to be unemployed but Congress allows federal supports like expanded unemployment to expire this summer. However, in many parts of the country, state and local official forbid property managers from evicting renters.

“If the government support expires prior the end of the eviction moratoriums, that will be a problem I’ve got a problem,” says Woody Heller, vice chairman and co-head of the capital markets group of Savills.

In the longer term, there is no way to know how strong or weak the U.S. economy will be as it recovers from the crisis. Until investors can test the strength of the U.S. economy, relatively few are likely to buy and sell apartments.

“There is not a huge motivation to sell in this market,” says Paul Leibowitz, senior managing director at Savills. “As a result there is a lack of product available to buy, so you don’t really have a lot of price discovery.”