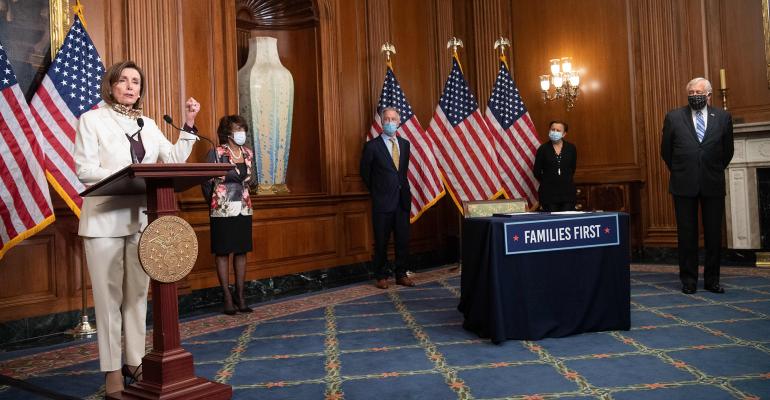 “We are tremendously concerned what happens if those systems are not renewed,” says one insider about expanded unemployment benefits.

The clock is ticking in Washington D.C. In a few weeks, a federal emergency program will stop distributing extra funds to people who lost jobs in the crisis caused by the novel coronavirus. That could cause a huge number of renters to fall behind on their rents and eventually lose their homes.

“There is a threat of a massive wave of evictions,” says David Dworkin, president and CEO of the National Housing Conference, a Washington, D.C.-based non-profit focused on ensuring safe and affordable housing for all Americans. “I am hoping that the impetus for Congress to take action is not when sheriff’s deputies on a large scale start dumping people’s personal effect and children’s toys onto the sidewalk. I don't think it takes a lot of social media to provoke a reaction to that.”

Millions of renters lost jobs in the economic crisis caused by the global pandemic. So far, they have largely been able to pay their rent on time, thanks to a web of government stimulus programs. The largest is now timed to expire at the end of July. Yet while the U.S. House of Representatives has passed the Health and Economic Recovery Omnibus Solutions (HEROES) Act some time ago to offer Americans a new round of stimulus money, the Senate has just gone on a two-week July 4th recess without passing a bill of its own.

For the time being, many property managers have been forbidden from evicting tenants from rental housing in many parts of the U.S. by a patchwork of local laws and federal regulations that are also expiring and, in some municipalities, face lawsuits.

Housing advocates get through to lawmakers

It’s not the first time Congress has waited to act on an important program. “No one is surprised that we are not going to have this done [by the beginning of July],” says Paula Cino, vice president of construction, development and land use policy for the National Multifamily Housing Council (NMHC), a non-profit advocacy group for the apartment industry. However, the delay is still nerve-wracking. “We don’t see any certain timelines.”

Advocates like Dworkin and Cino have been in close contact with legislators and their staffs, despite the crisis caused by the spread of the coronavirus. “Nobody is on the Hill having in-person meetings anymore,” says Cino. “It’s all conference calls and Zoom calls.”

Because of the crisis, advocates can no longer catch the attention of Washington players in the halls of Congress and the offices nearby. However, they can often schedule more substantive conversations.

“Everyone is working from home and they are dying for human contact,” says Dworkin. “If you have something worth talking about, it is easier to get a meeting with a member of Congress.”

The expiration of programs like enhanced unemployment benefits for out-of-work Americans at the end of July has also added urgency to these discussions. “We are already seeing an increased interest in discussion of this issue among Republican staff in some member’s offices,” Dworkin notes.

The U.S. House of Representatives also recently passed a proposal focused just on housing issues, which would postpone evictions and foreclosures for struggling renters and homeowners for a year. The new bill repeats parts of the much larger, $3 trillion HEROES Act that has largely been ignored by the Republican-led Senate since the House passed it in May.

The smaller, new Emergency Housing Protections and Relief Act of 2020 includes many provisions supported by advocates for both renters and property managers—such as $100 billion in emergency rental assistance. “That’s critical—it gets dollars into renters’ hands to keep them from ever missing a rental payment,” says NMHC’s Cino.

The House bill also includes a national, uniform moratorium on evictions for all renters, which is more controversial.

Most renters are still paying

The vast majority of apartment tenants are still writing rent checks for now. By June 20, more than nine out of 10 apartment renter households (92.2 percent) had made a full or partial payment for the month, according to a survey by NMHC, which gathered data on 11.4 million professionally-managed apartments from five leading property management software systems.

That’s more than a quarter of the 43 million rental apartments in the United States.

Millions of Americans have filed new claims for unemployment benefits every week since the COVID-19 crisis began in March. Many have been able to keep paying rent because of trillions of dollars of benefit programs created by the Coronavirus Aid, Relief, and Economic Security Act (the CARES Act) in the first weeks of the crisis. That includes direct payments of $1,200 per taxpayer and expanded unemployment benefits that provide recipients an extra $600 per week.

“We are tremendously concerned what happens if those systems are not renewed,” says Cino.

Of these existing programs, expanded unemployment benefits may have helped renters the most. But they have also created the most controversy with legislators. “There are those that believe that it leads to unintended consequences,” says Cino. “It is absolutely one of the top issues and concerns for Senate Republicans.”

Advocates hope that deadlines coming up will motivate Congress to act. “I am very concerned that things are not moving,” says Dworkin. “However, last minute solutions are what Congress does best.”