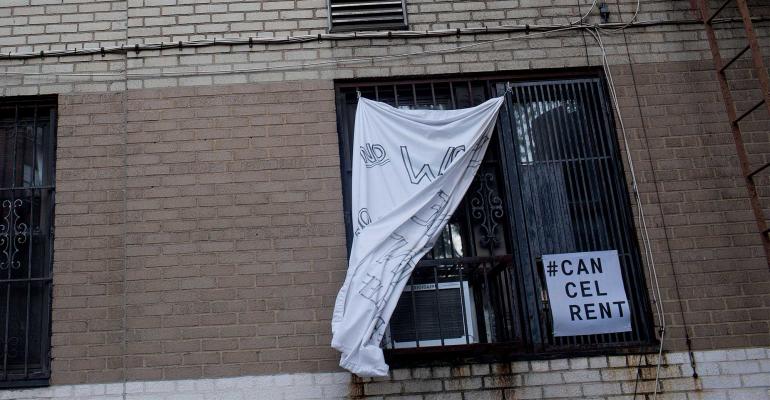 As Another Month’s Bill Comes Due, Renters at Small Apartment Buildings Struggle

Tenants in buildings with four or fewer units are more likely to be experiencing financial hardships preventing them from paying rent.

Note: This story has been updated with new information about a federal eviction moratorium announced Tuesday evening.

The vast majority of residents kept paying rent this summer at larger apartment communities–despite the economic crisis caused by the spread of the novel coronavirus. But smaller apartment properties typically do not have professional management companies–they are not included in the data that shows renters are still paying rent. And many renters who live in these building have stopped. They often have fewer resources to support them in a crisis like the COVID-19 pandemic. Struggling renters may have received a bit of a lifeline, however, with an announcement of a four-month pause on eviction hearings for Americans below certain income thresholds.

“At smaller buildings there is less data… and more problems,” says Brendan Cheney, director of policy for the New York Housing Conference, based in New York City.

Nearly a quarter of all units of rental housing in the U.S. are in relatively small apartment properties. Many of these renters are already falling behind in rent, according to a survey by the National Association of Hispanic Real Estate Professionals (NAHREP) and the University of California Berkeley’s Terner Center for Housing Innovation. More than half (52 percent) of the 380 owners and managers who responded to the survey said they had at least one tenant who had not paid rent in the month prior the survey. The vast majority of these landlords manage fewer than 20 apartment units.

The renters at these small apartment properties are much more likely to have fallen behind in their rent than the people who live at larger apartment communities. For example, the vast majority of households–92.1 percent–made full or partial payments of rent by August 27 at the 11.4 million professionally-managed apartments included in the National Multifamily Housing Council (NMHC)’s Rent Payment Tracker.

The people who live in small apartment properties have relatively lower income, pay a lower rent and tend to work in industries more vulnerable to COVID-19, according to the Urban Institute.

"The renters most vulnerable to COVID-related job losses are disproportionately concentrated in smaller buildings,” says Charles McNally, director of external affairs for the Furman Center at New York University, which focuses on research and debate on housing, neighborhoods, and urban policy. .

The individuals who own and manage these buildings also tend to have fewer resources to continue to house renters if those renters have stopped paying rent, according to the Urban Institute.

The number of renters who have fallen behind adds up to millions. Of the 73 million households that live in rental housing units of all types in the U.S., one-in-five (20 percent) deferred or simply failed to pay their rent last month. That’s according to the latest Household Pulse Survey from the U.S. Census, which reported data for the first 12 weeks of the pandemic through July 21. (The department plans to release the first data from phase two of the survey in September.)

These renters in trouble probably include many who for one reason or another were unable to navigate the administrative challenges of claiming unemployment benefits.

Millions of people lost jobs since the crisis caused by the coronavirus began in March 2020. Many have been able to keep paying their rent with help from federal enhanced unemployment benefits that provided an extra $600 with every unemployment check. Those benefits expired at the end of July. Some of that has now been replaced with the Lost Wages Assistance program, but those funds will run out in a matter of weeks.

Even before the extended benefits expired, millions of workers were unable to claim them. In New York City alone, 734,900 renter households have at least one member who lost employment due to COVID-19. But of those unemployed New Yorkers, 208,700 households did not claim unemployment insurance benefits, according to an analysis by the Furman Center.

Some of these workers may have been paid in cash, so that they now cannot prove they had been employed before the crisis. Others may have paid payroll taxes, but have challenges with their immigration status that prevent them from receiving unemployment benefits, says Furman’s McNally.

Some help arrived on Tuesday, however, with the Centers for Disease Control and Prevention issuing a new four-month moratorium on eviction proceedings. The policy comes one month after President Trump had signed an executive order directing U.S. agencies to explore ways to halt moratoriums. Under the new order, individuals who make less than $99,000 or familes with incomes below $198,000, will be protected, according to reporting by the Washington Post.

According to the New York Times, "To apply for the new moratorium, tenants will have to attest to a substantial loss of household income, the inability to pay full rent and best efforts to pay partial rent. Tenants must also stipulate that eviction would be likely to leave them homeless or force them to live with others at close quarters. Forms will be available on the C.D.C. website once the order is published in the Federal Register."

NMHC issued a statement in response to the measure saying it did not go far enough.

"We are disappointed that the Administration has chosen to enact a federal eviction moratorium without the existence of dedicated, long-term funding for rental and unemployment assistance," the statement reads. "An eviction moratorium will ultimately harm the very people it aims to help by making it impossible for housing providers, particularly small owners, to meet their financial obligations and continue to provide shelter to their residents. Not only does an eviction moratorium not address renters’ real financial needs, a protracted eviction moratorium does nothing to address the financial pressures and obligations of rental property owners. Without mortgage forbearance protections and protections from other property-level financial obligations such as property taxes, insurance payments, and utility service, the stability of the entire rental housing sector is thrown into question."

Prior to the moratorium, landlords had already filed to evict 39,006 renter households during the COVID-19 pandemic in the 17 cities tracked by the Eviction Lab at Princeton University, which has built a nationwide database of evictions. That includes 2,446 evictions in the week ending August 22, 2020.

In most of Eviction Lab’s 17 cities, local moratoriums on evictions have ended. In these cities, the number of evictions filed was beginning to approach typical levels over the last few years—despite broad agreement from apartment industry groups like NMHC that property managers should work with renters to avoid evictions whenever possible during the crisis caused by coronavirus. Many more state and local eviction moratoriums were set to end over the next few months.

“There is an eviction tsunami coming unless the federal government provides more assistance,” says Cheney. “It is probably starting already in ways we can’t see.”

The total number of households being evicted is also probably much higher than the number of evictions filed in housing court. “In places were there is not an eviction moratorium, renters may get an eviction notice and instead of fighting it just move out.”

Households that suffer through an eviction are likely to struggle for a long time afterwards.

“Research shows that evictions lower household earnings and increase the risk of homelessness and long-term residential instability,” says Cheney. Evictions also increase family stress, emergency room use and school instability. Some people that get evicted are also likely to squeeze into other family members, living in overcrowded conditions that are often to increase the risk of spreading the coronavirus. “There will be long-term consequences.”

The lost income that hurt these households also damages the rental properties where they failed to pay rent. “We saw building defaults and disinvestment in operations after the 2008 recession,” says Cheney. “We don’t want to see that again… it will further hurt the economy.”