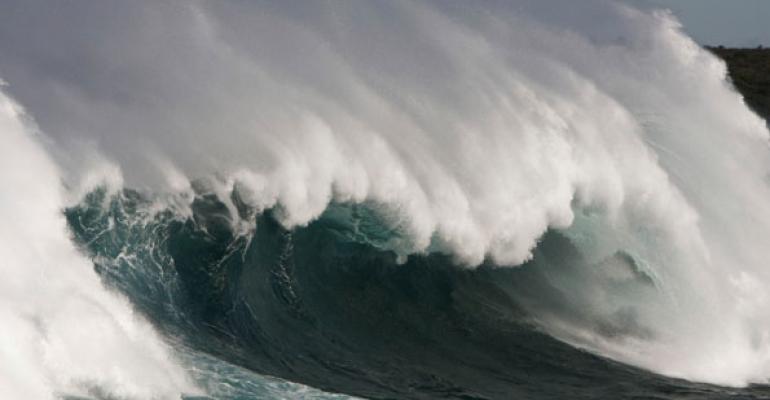 From SIFMA: Don’t Get Hit By the Social Media Tidal Wave

The ocean’s receding, so to speak, on social media, and advisors who don’t get on board with social tools are going to get hit by the tidal wave, said one advisor at SIFMA's social media seminar.

When the ocean starts receding rapidly, it’s typically a sign a tidal wave is about to hit. Right now, the ocean’s receding, so to speak, on social media, and advisors who don’t get on board are going to drown, said Jamie Cox, an advisor with Harris Financial Group in Colonial Heights, Va., during SIFMA’s Social Media Seminar this week.

“What most people in my role don’t understand is that ... the social tools are going to run over a great many of us,” Cox said.

Cox believes there’s a “TurboTax effect” going on in financial planning right now, in that a technological tool taken up by clients will take away some measure of opportunity for advisors to give advice, in this case to lower asset value players. Social media can do the same, and advisors who don’t embrace it are at risk of losing those clients.

“If you’re not using social tools, you’re going to regret it, because those of us who are using it understand it and can adapt as the needs change, but those who aren’t, they’re not going to make it.”

“The overall digital presence of our advisors was not very big,” said Natalie Taylor, vice president of marketing at Wedbush Securities.

So to help engage their advisors with social media, Wedbush laid out a four-step process. The first step is to create an advisor website, which acts as a dashboard and a destination for web traffic. Wedbush holds the advisors' hands through building their background information and summary, which can be repurposed for LinkedIn, Facebook, or Twitter. That will make for an easy transition into step two: LinkedIn.

“It is a business essential these days,” Taylor said. “It’s an extension of your business card. It’s where clients look to find you and validate you as a financial professional.”

Taylor said it’s very important for advisors to cross-link from their advisor webpage to LinkedIn, and vice versa. This creates an advisor channel, so to speak.

Step three is to get on Facebook or Twitter, which are more interactive mediums and require more maintenance than LinkedIn. Step four would be other digital activities, such as blogs.

No matter what order you go in, each social media site has a different purpose and requires a specific strategy, panelists said.

LinkedIn is one of the platforms that you can set up, spend some time and invest in it, and then leave it, said Michael White, vice president and director of marketing at Raymond James Financial, during a panel session on tactical uses of LinkedIn. It doesn’t require the regular care or daily or weekly updates that the other sites do.

Fay DeBellis, a wealth advisor with Morgan Stanley Smith Barney, said she uses her LinkedIn profile to build credibility and project that she works with the non-profit world in a professional setting.

It’s also a way to build relationships and trust with clients and prospects. That’s why she didn’t even think twice about including her photo.

“In our world, this is all about relationships,” DeBellis said. “It’s really hard to have a relationship with an egg on Twitter or that little grey head.”

LinkedIn allows you to be as specific as possible in the referral process, said Anita Heisl, senior vice president of practice management with Ziegler Wealth Management. In other words, you can look at your clients’ connections, and during a client meeting, ask whether a specific person would benefit from your services. This takes away the open-ended question about referrals; the client simply has to give you a ‘yes’ or ‘no’ answer.

Karen Walsh, director of the wealth management division for Bank of America Merrill Lynch, recommends that advisors upgrade their LinkedIn profile to a premium account. This allows you to do “referrals in reverse,” meaning you can see who is looking at your profile.

Facebook is a much more personal social networking site, and provides an opportunity to connect with the customer in a deeper way, said Renee Brown, senior vice president and director of wealth, brokerage and retirement at Wells Fargo. Wells Fargo plans to roll out a pilot program to test social media use with about 40 of its advisors in late summer or early fall.

Sarah Carter, general manager of social business at Actiance, said there are 901 million users on Facebook, sharing personal information and what’s going on in their lives. This can make it easier for financial services firms to provide more appropriate products and services to the individual because you know so much more about them, Carter said.

David Armstrong, an advisor with Monument Wealth Management, said he originally embraced Facebook on a personal level, a way to connect with his old friends from the Marines. But he soon discovered that clients and other people he did business with were on it.

Armstrong found that pictures drove a lot of the engagement with prospects. For example, his partner had a photo up of his new baby, and a prospect called him to congratulate him after seeing the photo on Facebook.

But the industry is now challenged by some of the changes Facebook has made, in that you can now have a professional person page, a product page, and a corporate page, Carter said. “So I can potentially split out my personalities.”

But Facebook is about connecting with individuals, and people don’t necessarily want to look at pages. Firms are going to be challenged with choosing who is going to be the identity on Facebook. “Gen Y, anyone who was born after 1981, doesn’t accept that there’s a difference between the professional person and the personal person.”

Chad Bockius, CEO of Socialware, said Twitter is the most important feed that people aren’t using in this industry. With Twitter, you can set up safe searches and make sure that information you need is coming to you in real time, such as information on different sectors of the markets you cover.

Harris’s Cox said advisors need to stop thinking about Twitter as a place where you have to consolidate thoughts into a small amount of characters, and start thinking of it as a place to get real intelligence in real time.

On Twitter, you can conduct a search 20 times faster than Google, Cox said.

But the words in your Tweets have to be very specific, because those words define whether people can find you in searches, Cox added.

Cox also uses Twitter along with Klout for social segmentation. Klout is a service that assigns a score to a person’s social media influence.

“What I’m looking for is the center of influence that can help me get more clients,” Cox said. “And I assume a higher Klout score means that they have higher social penetration, and therefore would be better for me.