/sites/all/themes/penton_subtheme_wealthmanagement/images/logos/footer.png
Recent
Recent
Women & Financial Wellness: Beyond the Bottom Line
May 17, 2022
Apple Delays Plan to Have Staff in Office Three Days a Week
May 17, 2022
SPAC Deal Tests Investors’ Zeal for Single-Family Rentals
May 17, 2022
Eight Must Reads for the CRE Industry Today (May 17, 2022)
May 16, 2022
Featured
The 10 Best and 10 Worst States in Which to Retire in 2021
Jul 15, 2021
Poll: 15 Classic Books on Investing and the Markets
Apr 03, 2020
Fifteen Must-Listen Business Podcasts for Advisors
Aug 14, 2020
Celebrity Estates: Jay Leno and Planning for Classic Car Collections
Feb 22, 2022
The Daily Brief
brought to you by 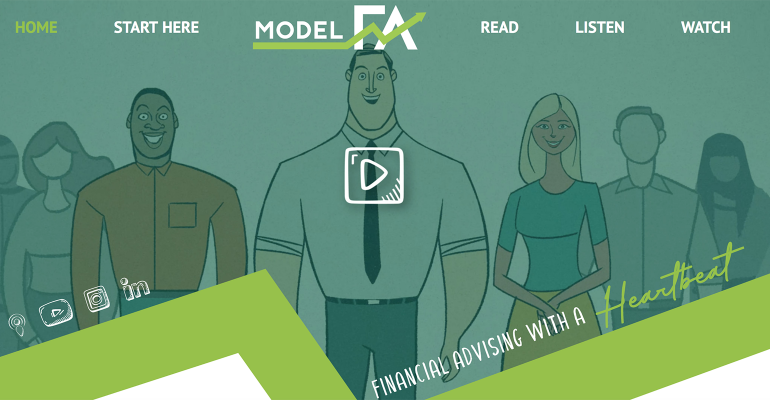 Model FA's new site includes a blog and podcast series with financial planners and experts on how to build and thrive as independent advisor or firm in the industry.

Model FA intends to be a resource for independent financial advisors to accesss information and advice on how to strengthen their own business practices, and today the site launched with a new podcast, blog and additional materials, according to Patrick Brewer, the founder of Austin, Texas-based registered investment advisor SurePath Wealth and host of the new Model FA podcast.

Brewer said the ambitions in creating Model FA stemmed from SurePath’s launch in 2016, when his team wanted to experiment with their approach but found tested advice difficult to attain. Model FA's launch has been in development for several months, and Brewer told WealthManagement.com he hoped it would be beneficial for independent advisors.

“The advisor community on the independent side is pretty dispersed. There’s not a good place to converse, interact and build relationships,” he said. “There’s no conflict of interest. Let’s create an environment where financial planners can get together and get better at their craft.”

There are already six episodes of the podcast available, including one with Carl Richards, the creator of the Behavior Gap and the Sketch Guy columnist for The New York Times, and Stephanie Bogan, the CEO and Founder of Educe and Limitless Adviser. Brewer said his goal was to encourage direct exchanges with guests.

“We want it to be more impact-oriented for the listener,” he said. “We’re trying to say, ‘here’s what you need to know, here’s the expert, and here’s why you need to hear it from them.”

In addition to the podcast, the site currently includes a blog with advice and suggestions for advisors. Brewer said they’d release a Model FA "accelerator" in the next month, which will act as a type of coaching program where advisors will be held accountable to reach certain growth goals. They also hope to release a model operating system by the end of the year.

Brewer said they were also speaking with prominent advisors to act as advocates and content contributors, saying that the perspectives on the site should include many voices. Content is currently available at no cost, and Brewer said he hoped to reach advisors who may not be aware of the benefits of building an independent practice.

“Most advisors get their start at the big banks and wirehouses … and they feel uncomfortable and they don’t know why, and they realize what they’re selling isn’t the best thing for their clients, or even for them,” he said. “I want to broadcast this out to all advisors stuck in that situation, so they know there is a better option.”