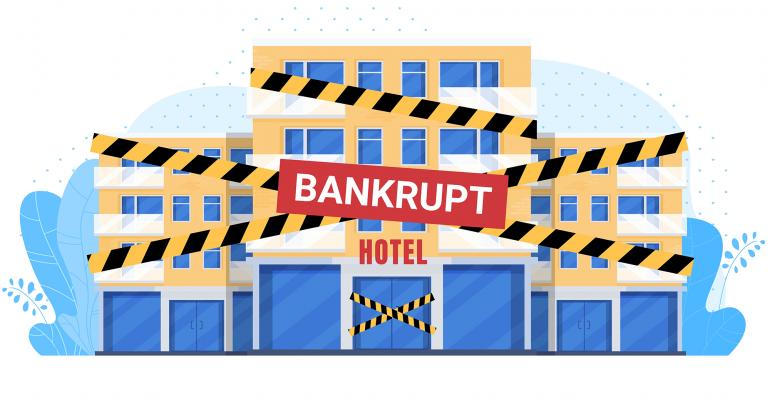 More hotel bankruptcy filings might be on the horizon as lenders lose patience dealing with defaults.

(Bloomberg)—Hotels operators are filing for bankruptcy at a faster pace in the U.S. amid a resurgence of Covid-19 infections that clouds the outlook for sustained recovery. More may be on the horizon as lenders lose patience with defaulting property owners.

A unit of Eagle Hospitality Real Estate Investment Trust, which owns a portfolio of corporate, leisure and airport hotels across the U.S., filed for bankruptcy protection in Delaware on Monday amid a collapse in travel due to the pandemic. It followed Marriott Wardman Park in Washington, which filed for court protection from creditors last week, joining the bankruptcies of two hotels in Brooklyn in December and Manhattan’s Martinique New York in September.

Just two hotel companies with liabilities greater than $50 million filed for bankruptcy in all of 2020, according to data compiled by Bloomberg. That’s still the most since 2012, which saw four filings, but well below the 10 cases seen in 2009.

Trouble at the Inn

Lenders have been reluctant to foreclose on struggling hotels since the pandemic crushed revenues, according to Stephen Selbst, co-chair of the restructuring and finance litigation group at Herrick Feinstein.

“If you take back a hotel, you’re the mortgagee, and now all of a sudden it’s your responsibility to keep the lights on,” Selbst said. “That’s like foreclosing on a horse. You have to feed the horse.”

Still, it’s “a little surprising” there weren’t more hotel bankruptcies last year, Selbst said. “Clearly the pace of workouts in hospitality is going to increase in 2021; whether that’ll translate to bankruptcies is less obvious.”

There have been eight bankruptcies by companies with liabilities over $50 million already this year, on par with 2020, which was the biggest year for filings since 2009, data compiled by Bloomberg show.

They included the National Rifle Association of America, the gun-rights group feared for its lobbying clout but now threatened with dissolution by the state of New York. Women’s clothing chain Christopher & Banks Corp. also fell into bankruptcy with plans to liquidate all 449 of its stores in just six weeks. The chain had to close all of its stores for more than month last year, compounding an already-tenuous financial position.

“Unfortunately, there is no vaccine equivalent to cure the downward retail spiral,” Michael Sirota of Cole Schotz said in the retailer’s first-day hearing on Friday. Christopher & Banks will try to sell all of its assets, but it is proceeding with the assumption that there is “limited, if any interest” in its physical locations.

The total amount of traded distressed bonds and loans fell to about $136 billion as of Jan. 15, down 6.4% week-on-week and 36% less than where it was at the start of March 2020, before the pandemic struck. Troubled bonds and loans declined 4.2% and 13.9%, respectively, in the latest week, according to data compiled by Bloomberg.

“Today’s distressed forecast may appear sunny with clear skies, but gusts of wind and thunderstorms loom on the horizon,” said Vincent Indelicato, partner at Proskauer Rose. Bankruptcy and restructuring professionals are likely to be very busy, he said.

There were 326 distressed bonds from 167 issuers trading as of Monday, according to Trace data. That’s down from 344 troubled bonds one week earlier but significantly less than the 1,896 at the March 23 peak.

Transocean Inc. had the most distressed debt of issuers that hadn’t filed for bankruptcy as of Jan. 15, Bloomberg data show.

--With assistance from Anik Chattopadhyay and Jenny Sanchez.