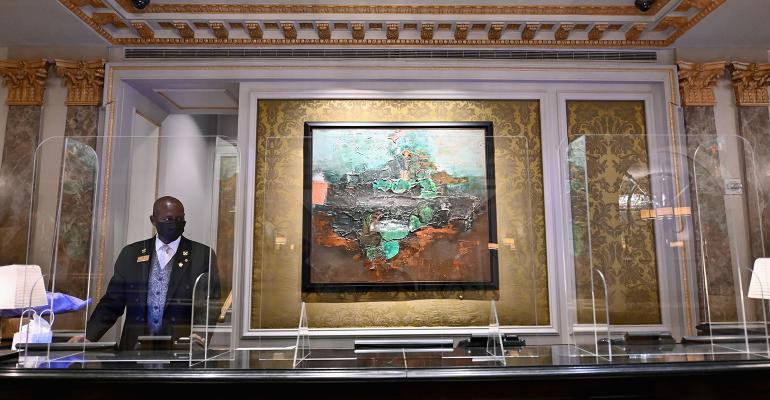 (Bloomberg)—As spiking Covid-19 cases further derail travel, the U.S. hotel industry is closing in on a bleak marker: One billion empty rooms for the year.

More than 962 million room nights have gone unsold through last week, according to lodging data firm STR. That’s about 46% more than all of last year. Based on current occupancy rates, the industry will pass 1 billion unsold rooms around Christmas, deepening a crisis for owners that may worsen before a Covid vaccine can fuel a recovery.

In a normal year, vacant rooms are simply the cost of doing business in an industry that rents space by the night to travelers who sign annual leases on apartments and longer contracts for corporate offices. The occupancy rate for America’s 5.3 million hotel rooms was 66% in 2019, just short of the record high; even so, more than 650 million room nights went unsold.

This year has been anything but normal, and the extra 350 million unsold nights come at a heavy cost. Based on an average daily rate of $131, hotel owners have seen about $46 billion in lost revenue. The result, industry groups warn, is that many properties will close without a new round of stimulus from the federal government.

“If there’s no relief before the holidays, I don’t know how many hotels will continue into 2021,” said Bijal Patel, chairman of the California Hotel & Lodging Association. “Many of us are going to be on the brink of shutting down.”

Investors sees better days ahead: a Bloomberg index of hotel owners is up 48% since Pfizer Inc. announced positive trial results for its coronavirus vaccine on Nov. 9. Still, most industry analysts predict a gradual recovery. STR forecasts revenue per available room, which combines pricing and occupancy, won’t return to last year’s levels until 2024.

Sandip Patel, whose family owns eight hotels in Maryland, is worried about holding onto his properties long enough to benefit from an eventual travel rebound.

The last nine months have tested the business in previously unthinkable ways, said Patel, who is unrelated to Bijal. He got crash courses in purchasing personal protective equipment and applying for grants and emergency loans. He figured out how to operate hotels more leanly, mothballing entire floors and unplugging appliances to save on electricity bills. The worst moment, he said, was when a kitchen worker tested positive for Covid-19.

All the lost room nights have made it hard to keep up with loan payments. Patel is especially worried about hotels whose financing is tied to commercial-mortgage backed securities. He said he’s asking loan servicers for relief, proposing to pay the interest now while tacking principal payments onto the end of the loan. The servicers have yet to agree, and Patel fears they may eventually foreclose.

“If you would have asked me at the end of January, I would have said this has a chance to be the best year in my 27-year history in this industry,” he said. “Now I’m working harder than if occupancy was running 80%.”