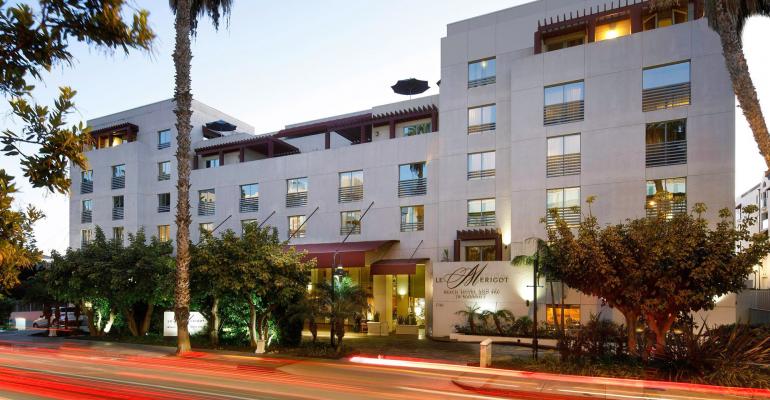 Local 11 of Unite Here filed a charge with the National Labor Relations Board against the JW Marriott Santa Monica Le Merigot.

(Bloomberg)—A union in California is seeking to force a luxury hotel to disclose how much it borrowed from a small business relief program and whether it’s using the money to pay workers.

Local 11 of Unite Here filed a charge with the National Labor Relations Board, arguing the JW Marriott Santa Monica Le Merigot has ignored the union’s requests for information about how the property is using the Paycheck Protection Program.

The union wants clarity on the impact of the federal program designed to keep workers employed during the pandemic, said Kurt Petersen, co-president of Local 11, which represents hotel workers in Southern California and Arizona.

“We need to have transparency and accountability over this program,” Peterson said. “We hope they will step up and disclose the information so workers can get what they deserve.”

The Le Merigot hotel, a short walk from Santa Monica Pier, currently employs about a dozen workers, compared with the 130 employees who staffed the hotel before the pandemic, Petersen said.

The PPP was part of the $2.2 trillion stimulus package enacted in March to help stem the economic fallout from the coronavirus outbreak. The Trump administration, which recently released data on roughly $520 billion in loans that were doled out, has said the program has supported more than 50 million jobs. Still, anomalies in the information that’s publicly available has made it difficult to track the impact.

An entity called Columbia Sussex Management borrowed between $2 million and $5 million through PPP, according to data released by the Small Business Administration. Sixteen other entities sharing the company’s address in Crestview Hills, Kentucky, also borrowed through the program, the data show. Those loans helped retain nearly 3,800 jobs, according to the SBA.Columbia Sussex’s website lists more than four dozen hotel properties, including the Hilton Head Marriott and the Boulders Resort & Spa in Carefree, Arizona.

Have a tip about how virus relief funds are used or misused? Write us at [email protected], or follow instructions to submit an anonymous tip at https://www.bloomberg.com/tips/

To contact the editors responsible for this story: Craig Giammona at [email protected] Christine Maurus