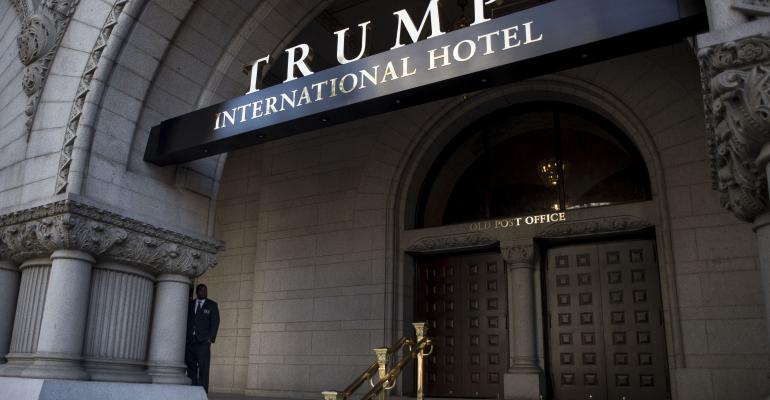 The Trump International Hotel in Washington, D.C. Is on the Market. We Look at Who May Be the Buyer

The hotel is a trophy property in a prime market. It also comes with some strings attached.

Who will elect to buy the controversial Trump International Hotel in Washington, D.C. and how much money will the luxury property command? Those questions underpin one of today’s most high-profile guessing games in the hotel sector.

Commercial real estate services company JLL, which is marketing the property on behalf of the Trump Organization, has set a Jan. 23 deadline for bids on the D.C. hotel. The Trump Organization—the New York City real estate business led by President Trump’s two adult sons, Donald Jr. and Eric—signaled in October that it might sell its rights to the property. The company operates the hotel through a ground lease with the General Services Administration, the federal government’s landlord.

“This is a trophy asset and likely to trade like other trophy assets in the United States, like The St. Regis New York,” says Alan Tantleff, leader of the hospitality, gaming and leisure practice at D.C.-based FTI Consulting Inc.

In October, a subsidiary of Marriott International Inc. sold The St. Regis New York for $310 million to a sovereign wealth fund controlled by the Middle Eastern nation of Qatar. Marriott still operates the hotel, which comprises 229 guest rooms and seven residential suites.

Among the hotel brands said to be eyeing the Trump hotel are Marriott International and Hilton Worldwide Holdings Inc., both of which are based in suburban D.C. Meli says a hotel brand could partner with a private equity investor to buy the hotel or purchase it outright, depending on the brand’s existing footprint in the D.C. market and the value it attaches to operating a flagship luxury property in D.C.

“I would expect a competitive auction process among a diverse group of buyers with relatively low costs of capital,” Meli says. “An offshore investor who may only be concerned with capital preservation and owning a trophy asset, as opposed to economic returns, could drive pricing to historic levels.”

But, he adds, a “potential fly in the ointment” for an offshore investor could be an unfavorable ruling from the federal government’s Committee on Foreign Investment in the United States (CFIUS) that would block a purchase of the hotel lease. As stated on the U.S. Treasury Department website, the committee addresses “any national security concerns arising from certain non-controlling investments and real estate transactions involving foreign persons.” Given that the federal government owns the hotel, those concerns could come into play.

On top of the CFIUS wild card, the new owner would need to jump through GSA hoops and potentially renegotiate the ground lease, Meli points out.

If the new owner could hammer out a long-term lease extension with the GSA and pay only base rent (as opposed to base-plus-percentage rent) and include reasonable escalation clauses, “then that would be considered advantageous,” Meli says. The Trump Organization pays $3 million a year in base rent to the GSA.

Under normal circumstances, Tantleff says he’d expect “tremendous interest” in the Trump property among foreign investors. But he believes the CFIUS and GSA constraints could temper that interest.

Even if few overseas investors bid on the hotel, several factors could spark a bidding war for the property according to Meli, such as its:

Taking those and other attributes into account, the sale price for the 263-room property’s ground lease could exceed $1 million per key, Meli notes. If the price were to hit the $1 million-per-key mark, the deal would be worth $263 million.

Figures from STR, a Hendersonville, Tenn.-based provider of hospitality data, show that since 2005, sale prices for luxury hotels in D.C. have ranged from a high of $400 million (Grand Hyatt Washington) to a low of $274 million (Hyatt Regency Washington on Capitol Hill). On a per-key basis, sale prices have gone from a high of $450,450 (Grand Hyatt Washington) to a low of $224,215 (Washington Marriott Wardman Park), according to STR.

The Wall Street Journal reported in October that the Trump Organization hoped to reap at least $500 million from the sale of its rights to the D.C. lease, which expires in 2103. That would amount to about $2 million per key.

In early January, D.C. real estate developer Brian Friedman, who says he intends to bid on the hotel, told The Washington Post that the Trump Organization’s envisioned sale price is unrealistic.

“There’s never been a hotel that’s sold even close to that price per [room] in D.C., and the ones that have sold for the highest prices had no ground lease,” Friedman said. “You would never get $500 million for a ground lease.”

As reported by the Wall Street Journal, the Trump family put the hotel lease on the sale block partly in response to criticism that they were defying government ethics laws by profiting from the property.

“People are objecting to us making so much money on the hotel, and therefore we may be willing to sell,” Eric Trump told the newspaper in October.