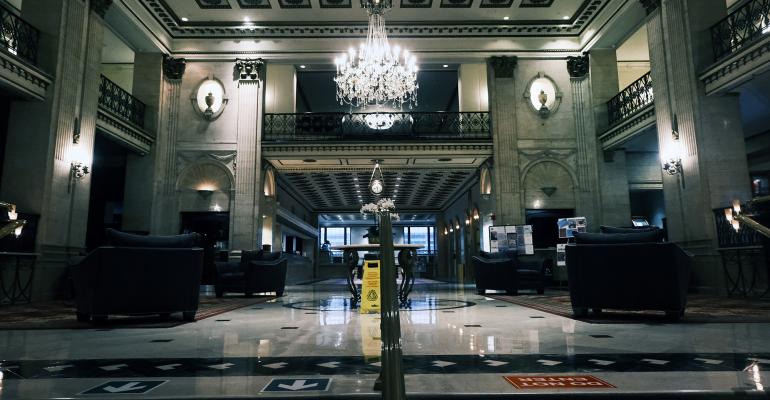 A trade group that represents Marriott, Hilton and Sheraton as well as smaller boutique hotels is asking the city to forgive or reduce interest charges.

(Bloomberg)—Struggling New York City hotels want Mayor Bill de Blasio to forgive the 18% interest they must pay when they are late on their property-tax bills.

A trade group that represents brands such as Marriott, Hilton and Sheraton as well as smaller boutique hotels is asking the city to forgive or reduce interest charges, much as it has done with other commercial properties. They say the added payments burden an industry pummeled by the pandemic, and if the city wants hotels alive when tourists return, it should offer relief.

Vijay Dandapani, president of the Hotel Association of New York City, which asked for the relief, said the industry is like a critically ill patient clinging to life. He estimates the occupancy rate in the city is closer to 10%.

“You’re just going to have hotels go belly up permanently if you charge 18% on top of a property tax that’s already a struggle to pay,” Dandapani said. “There’s a chance of revival if you’re comatose, but if you’re dead, there’s no coming back.”

He said the de Blasio administration hasn’t responded to the group’s appeal. Officials in the mayor’s office and city Finance Department didn’t respond to requests for comment.

At stake is tens of millions of public dollars derived from property taxes and penalties.

Budget officials expect the city to lose about $10.5 billion in revenue through June of 2022 due to the pandemic. That’s created challenges in balancing the $92 billion budget. Some City Council members said the sacrifice for hotels would be worthwhile.

“You look at a hotel industry on the verge of bankruptcy, and it’s hard not to think we should take measures to provide assistance,” said Keith Powers, a Democrat whose midtown Manhattan district includes many of the city’s biggest hotels. He said the council plans to seek relief during budget negotiations with de Blasio this Spring.

It’s difficult to determine how much hotels owe. Almost 60 hotels are in arrears on a total of $23.5 million in property taxes, including $2 million accrued interest, according to data from the city Finance Department as of Nov. 28, the most recent available.

That included the Chatwal on West 44th Street, ranked the city’s best by Conde Nast Traveler readers in 2018. It owed more than $800,000 in interest and unpaid taxes, according to the Citizens Budget Commission, a nonprofit monitor that conducted the analysis.

“The industry is clearly in dire straits,” said CBC’s Ana Champeny. “At the same time, it does create revenue for the city, and an incentive for the hotels to pay their taxes.”

The dated figures don’t reflect the true magnitude of the problem, said Dandapani. Many hotels aren’t owned by deep-pocketed companies such as Marriott International Inc. or Hilton Worldwide Holdings Inc. About 47% of the city’s 700 hotels are relatively small businesses with 150 rooms or less, Dandapani said. For them, an interest penalty of $100,000 atop a tax liability of $1 million can be dire, Dandapani said.

John Fitzpatrick, who owns two Irish-themed hotels in Manhattan’s Midtown East, said he had to take out a new loan just to afford his $2.4 billion tax bill because revenue has nosedived. To stay afloat, he closed one of his hotels at 57th and Lexington.

His pleas to the de Blasio administration to waive interest charges have been futile, he said. “They don’t seem to want to help,” Fitzpatrick said.