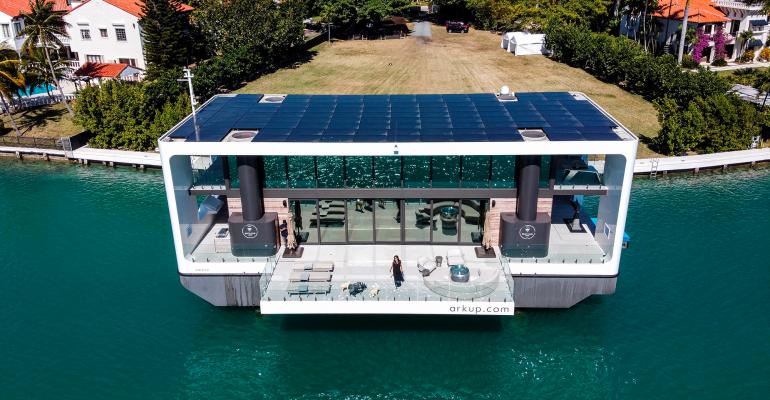 Arkups, as they are called, are hurricane-proof homes that can be docked at a marina or driven 2,500 nautical miles into the ocean.

(Bloomberg)—Miami may be a city with a penchant for five-star hotels—many with eye-popping art and sprawling pool complexes—and yet, the most exciting place to sleep there may soon be a boat.

And no, it’s not a nine-figure yacht.

In January the coolest place to rest your head in Magic City could be a veritable floating mansion, hovering above the turquoise waters of the Atlantic Ocean, where room service gets delivered by a valet on a motorboat and the only pool is the one on your private rooftop deck.

Arkups, as they are called, are the newest twist on waterfront dwelling: The hurricane-proof homes can be docked at a marina, or they can be driven at 8.5 knots as far as 2,500 nautical miles into the ocean. The concept is nascent. Arkup’s first prototype—the $5 million, four-bedroom, 4,350-square-foot Arkup75—was finished in 2019, and there are few others. One, however, has been commissioned by a Miami-based hospitality company with the hopes of turning Arkup into a new breed of vacation rental.

“We see Arkup not as a real estate product but as a hospitality product that’s much more convenient than going to the Maldives and getting an overwater villa,” says Andreas King-Geovanis, chief executive officer and founder of Sextant Stays, who persuaded Arkup to create a smaller version of the Arkup75, which will enable companies like his to potentially buy a number of them at a lower price. The new model, the Arkup40, is 2,380 square feet. It can be configured as a studio or as a two-bedroom for $500,000 to $900,000, depending on customizations.

Sextant plans to have as many as 10 Arkup40s in its portfolio, which currently includes condo-style vacation rentals in Miami and New Orleans. More of a competitor to the serviced vacation rental site Sonder than to the home-sharing platform Airbnb, Sextant is a pandemic success story. It had only 60 furnished apartments available for rent in March 2020 but took over terminated leases from some of its rivals, growing eightfold amid the coronavirus crisis. Now it manages roughly 500 units in its two markets—all with access to techy amenities like pharmacy kiosks in the lobbies and keycard-enabled wine and spirits dispensers—with the goal of raising $30 million funding by the end of the year, according to the South Florida Business Journal.

No doubt Arkups will be Sextant’s most attractive properties—there is nothing else like them for vacationers. And if King-Geovanis has his way, the modular floating homes may eventually be linked together, forming a completely one-of-a-kind resort, the likes of which may not exist anywhere else.

But baby steps need to be taken first. The company’s first Arkup40 will be ready in December and take reservations starting in January, raising the question of how difficult booking will be.

King-Geovanis says one thing that makes Sextant special is its “unique products like penthouses, not just cookie-cutter studios and one-bedrooms,” a portfolio that the company has achieved by working with developers from the ground-up. Its buildings have luxurious private outdoor spaces and tend to be small, with as few as 15 units, which feature the ability to interconnect, allowing them to cater to groups.

Arkup certainly fits that model. In fact, the manufacturer of “livable yachts” gave Sextant exclusive rights to rent out its prototype, the Arkup75, in 2020. King-Geovanis filled it with travelers for four or five nights until it found a buyer. That turned out to be a successful experiment for King-Geovanis, leading him to commission his own Arkup, which he now plans to rent for $1,200 to $1,600 a night.

Sextant is fine-tuning the floor plan and designs for its shiny new accommodations, which will likely have two bedrooms and one or two bathrooms. The whole structure will have floor-to-ceiling storm glass walls to simulate the castaway vibes of being stranded—in luxury—out at sea. (The company says the windows make it hurricane-proof, but docking the vessel makes most sense in the event of an actual weather threat.)

The rooftop will be similar to a private deck,  with a hot tub and outdoor kitchen. Guests can have it provisioned before arrival as they would with a yacht charter, or they can request deliveries via a dedicated bellman with a motorboat. In inclement weather, the vessel is able to self-stabilize with retractable columns called spuds that go 20 feet deep into the water. King-Geovanis expects to have space for the Arkup40 at Vice City Marina in Miami. And while it’s unclear where the floating villa will dock during rentals, those who stay on it will be able to have a captain steer them out into the ocean before anchoring down.  The captain will then take a tender back to shore, leaving guests in total isolation.

If you live in Dubai or Singapore, chances are the single-unit Arkup40 won’t be worth the trip; cities in Asia and the Middle East have far easier and more ample access to five-star and full-service overwater accommodations. But for those in the U.S. there’s little competition for Sextant’s Arkup.

Some Sandals hotels in the Caribbean have opened overwater bungalow-style suites in recent years; there’s also the Palafitos at El Dorado Maroma, in Mexico, which is a few hours’ flight from New York City. Other long-awaited options that have been in the works since at least 2016 have yet to open, including the Viceroy in Bocas del Toro, Panama.

Even when factoring in Airbnb’s and Vrbo’s offerings, there is little in the way of floating hotels in North America. A spokesperson for Vrbo points toward the company’s collection of houseboat stays as the closest alternative. While there are upwards of 200 in Florida, they don’t tend to hit the typical five-star notes. Airbnb, by contrast, features a few well-designed floating homes among its most popular stays, but they’re in places like Greece, Norway, and Bali.

That means it may be tough to score a booking with the Arkup40—or at least until other hospitality companies get in on Sextant’s game and begin purchasing them.

Unlike a yacht, owning an Arkup seems like a straightforward proposition. “The boat is sitting out of the water most of the time, so you don’t have issues of saltwater corrosion or having to scrape the hull frequently,” King-Geovanis says. Instead, the house just needs to be towed back to land once a week to connect to utilities and dispose of wastewater. Plus, he notes, the Arkup is licensed as a boat, so you don’t have to pay property taxes on one.

“The future is really having multiple Arkup 40s that can interconnect and form more of a resort experience,” King-Geovanis says. Joining them results in a pretty cool design trick, he adds: “When you put four of them together, the docks form a pool in the middle.”

To contact the author of this story: Nikki Ekstein in New York at [email protected]