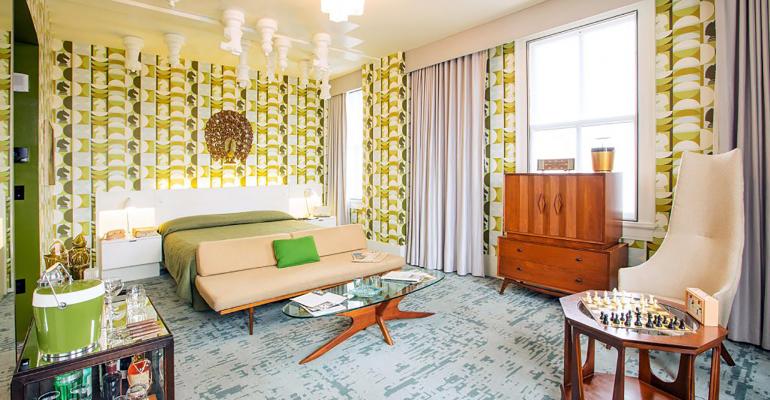 The 21C hotel in Lexington, Ky. redesigned one of its rooms to mimic the ceiling chess board in The Queen’s Gambit.

(Bloomberg)—The U.S. hotel industry closed 2020 with a whopping 1 billion empty rooms for the year—but the 21C hotel in Lexington, Ky., has an idea to keep at least one of its 88 accommodations off that list.

Taking inspiration from its hometown’s prominent role in the Netflix series The Queen’s Gambit—which has netted more than 62 million viewers—the hotel redesigned one of its rooms in honor of the show’s protagonist chess savant, Beth Harmon.

On the Harmon Room’s ceiling is a larger-than-life chess board with suspended kings and pawns, as imagined in the series; its walls are covered in a retro-inspired knight print by the acclaimed Kentucky-based studio, Ferrick Mason. Scattered throughout are copies of Chess Review magazine and midcentury modern furnishings on loan from a local bookstore and local antiques dealers.

Whereas the average room at the 21C Lexington tends to run roughly $140 a night, the Netflix-inspired pop-up goes for closer to $220; the markup includes such swag as a Queen’s Gambit Guide to Lexington (featuring places like the Wheeler Pharmacy and Ben Snyder Department Store) and complimentary “Lex Liquors” tote bags such as those  featured on the show.

It’s not the first time a hotel has created rooms inspired from fan-favorite films and TV series. There’s the “Talladega Nights'' room at the Curtis Hotel in Denver; the “Pretty Woman” in the Four Seasons Beverly Wilshire in Beverly Hills, Calif.; and the cute independently-owned “cottagecore” “Lord of the Rings” hobbit house in Trout Creek, Mont. In general, they range from short-lived publicity grabs to enduring pilgrimage sites for loyal fans, with their staying power largely dependent on the lasting influence of their source material. (For its part, 21C plans to keep the room through late spring.)

It may be just one hotel room, but both 21C and the city’s tourism board, VisitLex, are hoping the marketing stunt can help regenerate tourism to the small but honorable city.

“Our hotel revenue in the city of Lexington was down over $100 million in 2020 [compared to the previous year], dealing with the pandemic,” says Gathan Borden, vice-president of marketing for VisitLex. “So right now, all of our hotel properties in our destination as a whole are really looking for some kind of bite, something that will get people excited about traveling again.”

Given the shared endgame, the room’s design and creation was a collaborative effort between 21C and the city of Lexington. VisitLex helped 21C create the room in a little over a week with the help of local antique shop—and the locals themselves. One example would be Kentuckian Lucy Jones who loaned some of her personal furniture to the hotel for use. Two shops in Lexington, Black Swan Books and Scout Antiques, also came together to donate some product for the room.

“The project came together very quickly, in 10 days, because the partners loved the destination, love the hotel, and love the project that we’re trying to put forth,” says Brian Pulley, director of sales and marketing at 21c Museum Hotel Lexington.

Leveraging the chess-themed show may seem desperate, but so far it’s proved a successful move for companies with a relevant connection to Beth Harmon. Chess.com, a social network and chess server website, has added around 1 million new members each month since lockdowns began in March—around 2.8 million in November alone, a bump that corresponded to the show’s release. Mary Higbe, director of marketing for toymaker Goliath Games told NPR that in November, her company’s chess sales rose 1,048% over the same period last year.

But those trends prove that 21C’s speedy timeline may have kicked off too late. By the time the hotel’s partnership with VisitLex was announced in January, Queen’s Gambit was already old news. With the holidays and constant streaming, such shows as Bridgerton and Bling Empire were the next big thing. While Queen’s Gambit was viewed by a record-breaking 62 million households in its first 28 days on the service, it has already been one-upped by Bridgerton, which drew 82 million households to tune in during its comparable opening period. Demand for chess-themed everything may be in the rear view mirror, too: 21C’s site generally shows the Harmon room to be available for the duration of its scheduled run.

Still, Borden says other, small destinations can mimic its nimble bid to stand out in a competitive marketplace—and perhaps capture the imagination of U.S. travelers who are still limited to domestic trips within driving distance. Regency-inspired London, after all, is still off the table.

To contact the author of this story: Annmarie Welser in New York at [email protected]