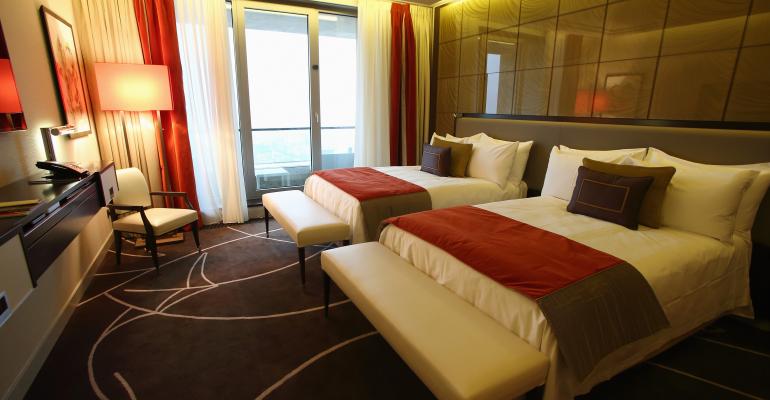 Occupancies are unlikely to rise much higher than their current high level. And property prices are already so high they are unlikely to increase much more relative to incomes.

Hotel investors are struggling to squeeze higher yields from acquisitions in a market that may already be near the top.

“We are really at peak levels now and we really have been for the last couple of years,” says Joseph Rael, director of consulting and analytics for research firm STR.

Hotel prices and room rates are high. That’s good news for investor who own hotels already, but market conditions put a limit on how much investors can hope to gain from new acquisitions. Occupancies are unlikely to rise much higher than their current high level. And property prices are already so high they are unlikely to increase much more relative to incomes.

“There is really not that much opportunity for growth,” says Rael.

This year started strong for hotel purchases. Investment sales volume in the sector totaled $1.8 billion in February 2018, up 5.0 percent from the year before, according to Real Capital Analytics (RCA), a New York City-based research firm. January was also busy. In the first two months of the years, hotel investment sales volume went up 17 percent.

“An increase in portfolio activity helped bolster volumes in both January and February and may continue to boost volume in coming months as well,” according to RCA. Nearly $4.0 billion worth of hotel portfolios have gone under contract this year.

However, the amount of hotel transactions has been declining overall since 2015, the busiest year in recent memory for commercial property sales. “We are going deeper into the real estate cycle… investment volume tends to slow down late in the real estate cycle as investments get harder,” says Kevin Mallory, senior managing director and Americas practice leader for CBRE Hotels. Buyers spent $27 billion on hotel properties in 2017, down from $36 billion the year before, according to CBRE’s analysis of RCA data.

The biggest change in how many hotels have been selling is in the sales of whole entities and property portfolios. That’s because there are only so many giant hotel portfolios on the market. Sales of hotel entities fell roughly 90 percent in 2017 compared to the year before. Sales of hotel portfolios fell 62 percent, according to CBRE. Investors bought about the same dollar volume of single hotel assets in 2017 as in 2016: about $22.5 billion.

Mergers and acquisitions in the sector are likely to become a slightly more common as hotels move to a later stage of the cycle. Investors like REITs are looking for ways to increase their value, and the efficiencies of a merger are one way to do that without having to rely on even greater gains in values that may be near their highest point.

Cap rates on hotel transactions have deeped lower in late 2017, but have remained unchanged in recent months. Cap rates for limited-service hotels averaged 9.2 percent in February and for full-service hotels 7.7 percent, according to RCA.

Buyers are also turning their attention to smaller markets and smaller properties to find hotel assets with higher yields. “The top 25 markets are pretty maxed out in terms of occupancy. In secondary markets outside of the top 25, there is still some room for growth,” says Rael.

Buyers typically pay less per-room for these properties. As a result, as more of these types of assets traded in 2017, the average price investors paid for hotel rooms in the U.S. declined. “We don’t think that is an indicator of asset prices declining… it’s more of a shift from primary markets in 2016 to secondary markets in 2017,” says Rael.

Investors are also spending more on capital improvements after they buy the properties. “They are finding some opportunities to renovate,” Rael notes.

Occupancies are likely to finally dip slightly in 2018, averaging 65.8 percent over the year. That would be down 0.1 percent from 2017. “That would be the first decline in average occupancy rate in a long time,” says CBRE’s Mallory. “Occupancies would still be very, very healthy—near record-high levels.”

Hotel occupancies are likely to fall slightly as developers finally manage to build more new hotel rooms than there will be demand growth. Demand for hotel rooms will grow 1.8 percent in 2018, according to CBRE. That’s down from 2.8 percent in 2017.

“We view it as a good economy, but not necessarily a robust economy for hotels,” says Mallory.

Income from hotel properties is likely to improve, however. Revenue per available room (revPAR) is expected to rise 2.5 percent in 2018, according to CBRE. That’s compared to 3.0 percent in 2017.