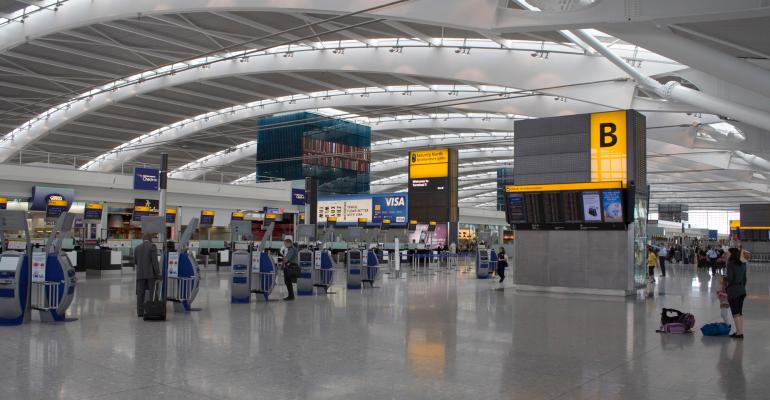 (Bloomberg) -- London Heathrow airport raised its passenger forecast but warned that demand is likely to drop off later in the year as a summer boom gives way to a “winter freeze.”

The airport, Europe’s biggest hub before the Covid-19 pandemic decimated travel, raised its annual passenger forecast by 16%. Even so, it will remain unprofitable this year after total losses from coronavirus disruption reached 4 billion pounds ($5.1 billion).

While the U.K.’s decision to drop Covid-related curbs sparked a travel surge over the Easter holidays, demand is volatile, the airport said in a statement Tuesday. Airlines are already canceling services into the fall, and higher fuel costs, a slowing economy and the impact of Russia’s war in Ukraine on bookings for flights to Europe will drag on the comeback, Heathrow said.

“There’s a huge amount of uncertainty,” Chief Executive Officer John Holland-Kaye said in an interview. “A lot of the demand that we’ve seen coming through involves people cashing in vouchers or taking postponed journeys. In a worst case scenario this wouldn’t continue, and we’d see a new wave of coronavirus in the autumn.”

The comments follow a chaotic Easter break that saw understaffed airports and airlines swamped by large volumes, and come amid a tense debate over how to claw back some of the pandemic-driven losses.

Heathrow is lobbying U.K. officials to allow it to raise fees to around 42 pounds per passenger, while airlines want to keep increases to a minimum. The airport says service will suffer if its demands aren’t met.

The Civil Aviation Authority’s proposal to raise fees to up to 34.40 pounds doesn’t go far enough, the airport said, and “will see passengers faced with longer queues and more frequent delays, as well as threatening Heathrow’s ability to fund itself affordably.”

The CAA has set an interim price cap of 30.19 pounds per passenger. The airport says it expects a decision by July, though that will be subject to further consultation.

Virgin Atlantic Airways Ltd., one of the biggest operators at Heathrow, accused the airport of issuing “cynical forecasts” that ignored evidence of a rapid rebound. The hub is “seeding doubt in the strength of demand so it can seek excess returns to shareholders and secure an unjustified increase in charges,” the airline said.

Virgin expects to reach 100% of its 2019 passenger levels during the summer peak and said Heathrow is likely to regain its status as Europe’s busiest hub for the full year.

Heathrow is continuing to scale up operations while seeking to address a staffing squeeze, Holland-Kaye said. The CEO said operations will remain stretched during the summer peak but that over Easter the airport successfully dealt with 80% of the 2019 customer load with only 55% of the staff.

With the 2022 passenger tally now forecast at 52.8 million -- about 65% of pre-pandemic levels -- there’s still no prospect for a return to profit or the resumption of dividend payments this year, Heathrow said. Adjusted earnings before interest, tax, depreciation and amortization turned positive in the first quarter, but the company still had a pretax loss.

Heathrow had a loss of 1.8 billion pounds last year on that basis, narrowing slightly from 2020, after passenger numbers slumped to the lowest since 1972. The break-even point comes at about 65 million annual passengers, the airport has said previously.

--With assistance from Siddharth Philip.