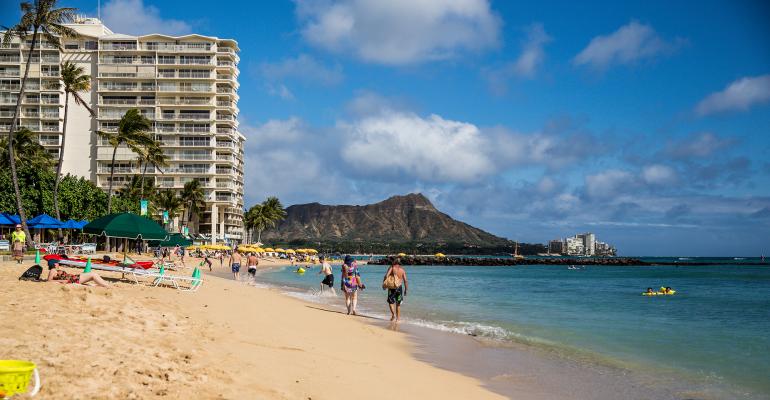 Everyone’s Going to Hawaii, and the Resorts Aren’t Ready

For the week spanning June 1-8, the state saw 2,000 more arrivals than it did in the same period in 2019. But it’s facing a shortage of hospitality workers.

(Bloomberg)—After a record visitation year in 2019, the coronavirus pandemic brought Hawaii’s tourism industry to a screeching halt, delivering both residents and the environment a much-needed breather. Now, tourism has roared back—almost too loudly.

For the week spanning June 1-8, the state saw 2,000 more arrivals than it did in the same period in 2019. Standard room rates at luxury resorts are pushing $3,000 a night, in some cases quadrupling the typical rates, and a rental car shortage has led some tourists to hit Hawaii's fragile coastal roads in U-Hauls. Restaurants need to be booked weeks in advance, surf lessons and snorkel tours are sold out through summer, and even with a reservation, lines for popular attractions such as Maui’s Haleakala National Park face unprecedented wait times.

Tourism is the state’s economic lifeline, responsible for at least a quarter of all jobs. Without it, the state’s gross domestic product declined an estimated 7.5% last year. But the return of tourism is exposing other issues across the state, from a crisis of livability to an alarming labor shortage.

Visitors Are Back, But Workers Are Gone

Without visitors, Hawaii’s previously-low unemployment rate of less than 4% skyrocketed to one of the highest in the nation: some 15%. But hiring hospitality workers back has been unexpectedly problematic. At Four Seasons Resort Maui at Wailea, it’s been so hard to staff back up that Mark Simon, director of marketing, says he’s recently been delivering room service items, clearing restaurant tables, and assisting guests with luggage.

Across the island chain, an estimated 40,000 hotels and restaurant jobs are going unfilled, according to a database from the State of Hawaii Workforce Development Division. Mufi Hannemann, president of the Hawaii Lodging and Tourism Association, says that’s partially due to the ongoing lure of stimulus checks and unemployment benefits and partially because of migration.

With a greater number of opportunities and more favorable living costs on the mainland, many islanders have left the state altogether: An estimated 16,000 have disappeared from Hawaii’s labor force since the pandemic began, according to the Economic Research Organization at the University of Hawaii. Hannemann says the hospitality industry was especially affected, with furloughed workers turning to jobs in other industries during the long shutdown.

That’s coinciding with a season so busy, it feels like Christmas. Four Seasons’ Simon says every beach chair and pool lounger at his resort is snagged by sunrise, and restaurant and spa reservations are booked out. To meet demand, he’s been asking staff to work additional hours and wear all hats; managers are busing tables, and bellhops are helping at the front desk.

The same is happening at restaurants along the strip in Waikiki, where restaurant windows have signs urging guests to be patient due to lack of staffing. “We have a minimum of 10 job openings, which is unheard of,” says Michael Miller, director of operations at the locally-owned Tiki’s Grill & Bar. “And people aren’t even coming in for interviews.”

As a result, restaurants are now working only off reservations. Locals who kept neighborhood dining haunts afloat during the pandemic can no longer score tables, even midweek. “We want to welcome everyone back, but not all restaurants are in tip-top shape,” says Sheryl Matsuoka, executive director of the Hawaii Restaurant Association.

Companies are so desperate for help they’re offering job incentives such as hiring bonuses. At PacWhale Eco-Adventures in Maui, Blake Moore, director of operations, is doling out complimentary snorkel tours to the famed Molokini Crater just for applying—although those tours are sold out weeks in advance.

Hawaii’s popularity this year is due to strict Covid-19 testing protocols and mask mandates, ultra-low infection rates, and ample air seats, as many airlines diverted long-haul planes to Hawaii when Europe was slow to reopen.

In April, the state received 484,071 monthly visitors—about half what it reported for the same month in 2019. But Hawaii feels twice as crowded as during peak holiday seasons, says Ben Rafter, a member of the Hawaiian Tourism Authority Board. Prohibitive rules around island hopping that were relaxed in mid-June have so far prevented most visitors from spreading out, resulting in denser volumes in fewer areas. Add ongoing social distancing requirements and labor shortages, and the scales of supply and demand keep tipping further out of balance.

It’s particularly bad in Maui, which has the most direct air travel from the mainland. Chelsea Martin, founder of boutique travel agency Passport to Friday, has seen her Hawaii bookings more than triple those of 2019. Maui, she says, is her top request.

“We’re seeing luxury spend like never before,” says Jonathan McManus, co-owner of Hotel Wailea, a 72-suite Relais & Chateaux property. “Our treehouse dinners, including wine pairings, cost about $2,000 for two people and are booked every night through the month. It’s staggering.”

Debbie Misajon, owner of Hawaii-focused agency Coconut Traveler, says she’s booking 10-day family itineraries that push $50,000, not including accommodations. “Who spends that in Hawaii?” she asks.

Among those splurging is Greg Kroencke, a financial advisor from Houston. He recently visited Maui and the Big Island with his wife and three children and says it turned out to be one of the priciest family vacations they’ve ever taken. His SUV rental on Maui cost more than $500 a day, and he’s never paid more for a hotel room. Scenic helicopter flights on Maui were sold out, so he nabbed one on the Big Island for $1,600 for an hour. “It seemed like a deal, compared to the $6,500, two-hour option my wife found,” he says.

During his five days in Maui, Kroencke barely managed to get a single zip-lining ticket for his kids or to score restaurant reservations before 9 p.m. “Over the next few months, visitors need to mentally prepare themselves to be patient and not do everything on their wish list,” he says.

The situation is troublesome for both visitors and residents. Despite raising rates 20%, owner of surf school Maui True North Brett Sheerin is so busy he’s turning travelers away. “I appreciate the business, and the economy needs it, but it’s frustrating for locals to have the traffic and crowds back,” he says. “The government talked about curbing tourism in 2019, and it’s as if they forgot how intense those numbers were for locals and the land.”

In November, the Hawaii Tourism Authority launched a campaign in conjunction with the Hawaii Visitors and Convention Bureau urging visitors to explore beyond the famous attractions in the spirit of “malama,” or caring for the land. But recent behavior suggests that tourists still see Hawaii as paradise, not a place people call home.

“We don’t begrudge tourists wanting to see the waterfalls and black sand beaches,” says Jon Benson, general manager of Hana-Maui Resort, the sole hotel in a remote East Maui town on the famed Hana Highway. The problem, locals say, is tourists clogging traffic by parking illegally and stopping in the middle of the road to take photos.

“Visitors forget locals commute to work on that road,” adds Benson. “You wouldn’t stop to take photos on the 405 in California. We need to find a healthier balance of respect.”

To contact the author of this story: Jen Murphy in New York at [email protected]