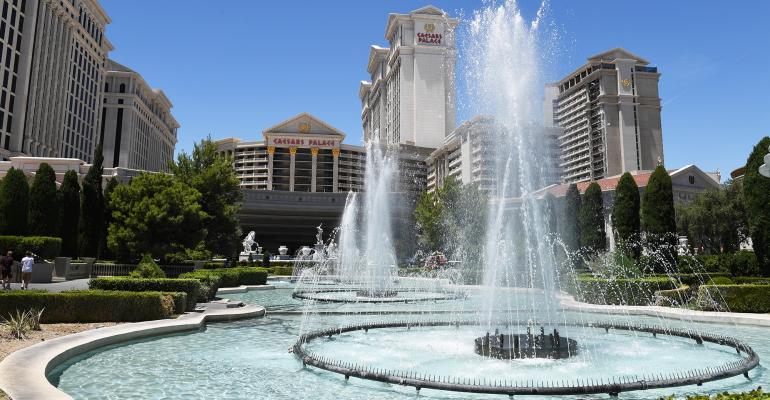 The casino and gaming company plans to offer up to 20.7 million stock shares and sell some Las Vegas real estate to shore up its finances.

(Bloomberg)—Eldorado Resorts Inc. said it plans to issue new shares, sell some Las Vegas real estate and take other steps to strengthen its finances ahead of a $17 billion merger of Caesars Entertainment Corp.

The casino and gaming company is offering as many as 20.7 million shares of its stock, with the proceeds going to general corporate purposes, the company said Monday. At the closing price of $38.44, that could generate about $800 million.

Vici Properties, a real estate investment trust spun off from Caesars, is providing a $400 million mortgage on a convention center Caesars opened in Las Vegas, and is purchasing 23 acres of land nearby for $4.5 million an acre. Eldorado also amended terms to a lease with Gaming and Leisure Properties Inc., which owns a number of casinos that it manages.

Lastly, Eldorado and Caesars obtained waivers from banks to requirements that they maintain a certain level of debt to earnings.

The acquisition of Caesars, which was first announced in June of last year, is one of the largest and riskiest deals yet to close from the pre-Covid era. The deal will make Eldorado, once a small, family-run casino business, the largest operator of gambling establishments in the U.S.

The Reno, Nevada-based company was already having to find new owners for several properties in markets where it feared regulators may have objected to its increased market share. The length of time required to win approvals in each of the states the company would operate in extended into the coronavirus pandemic, which shuttered virtually all of the casinos in the country.

Eldorado and Caesars have obtained more flexibility from banks on key provisions in its debt documents that determine how much the company can borrow relative to its earnings. Companies in large swaths of the travel and entertainment industries have obtained similar concessions from lenders as their earnings plunged during the pandemic, avoiding a wave of defaults.

The two companies said they amended terms of their existing bank credit lines and new debt that a group of lenders led by JPMorgan Chase & Co. had agreed to provide for the merger, according to filings. The amendment on the new credit line means Eldorado won’t be required to comply with a covenant that limits the amount of its secured debt to 6.35 times earnings until September 2021, unless it opts to terminate the waiver sooner.

The bank group has also agreed to increase the credit lines they are providing to Eldorado and Caesars as part of the financing for the merger by a combined $210 million, according to the filings.

Eldorado still requires the blessings of the Federal Trade Commission as well as regulators in New Jersey, Indiana and Nevada. Chief Executive Officer Tom Reeg, originally predicted a close for the deal in the second quarter of this year, while a filing on Monday said it would be in mid-2020.

To contact the reporters on this story: Christopher Palmeri in Los Angeles at [email protected];