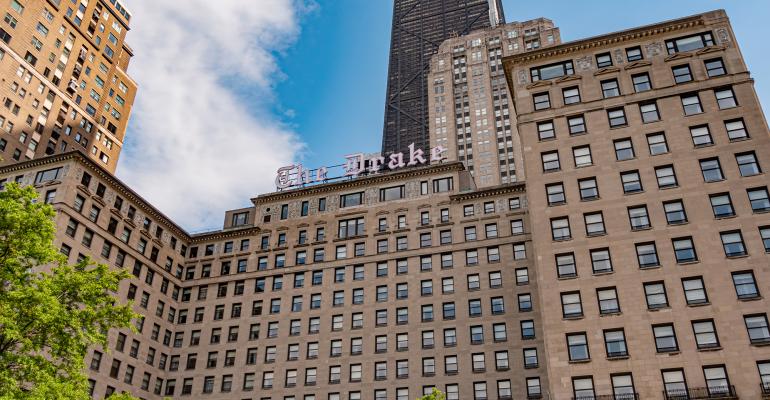 The Drake, located on the Magnificent Mile, has 535 rooms and more than 200 feet of retail frontage.

(Bloomberg)—The owners of Chicago’s Drake Hotel are putting it on the market, betting that the nascent travel recovery will draw buyers for a famed property on the Magnificent Mile.

The brokerage JLL is representing the Brashears family, which holds a controlling interest in the hotel, and Acore Capital. Together, the two entities own 90% of the property, which is expected to fetch more than $250 million, according to people familiar with the effort who asked not to be named because the matter is private.

“It’s the most recognizable hotel and probably the most valuable real estate in all of downtown Chicago,” said Adam McGaughy, a senior managing director for capital markets at JLL, who is leading the sales effort with Jeffrey Bramson. “I expect the group that comes in and acquires the property is going to look to upgrade it significantly.”

A representative for JLL declined to comment on the potential price.

The Drake -- whose location on Chicago’s Magnificent Mile, a prominent downtown stretch known for its upscale shopping, has made it a popular choice over the years for world leaders and celebrities -- has 535 rooms and more than 200 feet of retail frontage on N. Michigan Avenue. The buyer could convert a portion of the hotel to residential condominiums, expand the food and beverage operation, or take advantage of unused development rights.

The Brashears family, which controls its stake in the hotel through an affiliate called BB&A Venture, has had a piece of the hotel since it opened in 1920. The hotel is coming to market at a time when demand for U.S. travel is outweighing concerns about a spike in Covid-19 cases attributed to the delta variant.

Revenue per available room, a metric that combines pricing and occupancy, was higher during the week ending July 31 than the same period in 2019, before the pandemic.

Hotel investors have reacted to the recovery by pursuing acquisitions, striking deals for high-profile resorts in Northern California and South Florida. Properties in Sun Belt markets seeing fast economic growth have also been in high demand.

Big urban hotels that depend on business travelers and corporate meetings are another story. Chicago hotels registered occupancy rates of 54% in June, according to STR, placing it with Boston, San Francisco and Washington, D.C., among major markets recovering at a slower pace.

Chicago has been hit hard by the pandemic. Retailers are struggling to bounce back after Covid lockdowns and civil unrest pushed shop vacancies higher on the Magnificent Mile.

Even so, McGaughy predicted that the hotel’s pedigree and location would attract buyer interest, especially since a controlling interest in the property, which includes the hotel and the ground under it, has never been offered for sale.

“This is a very unique situation,” he said.