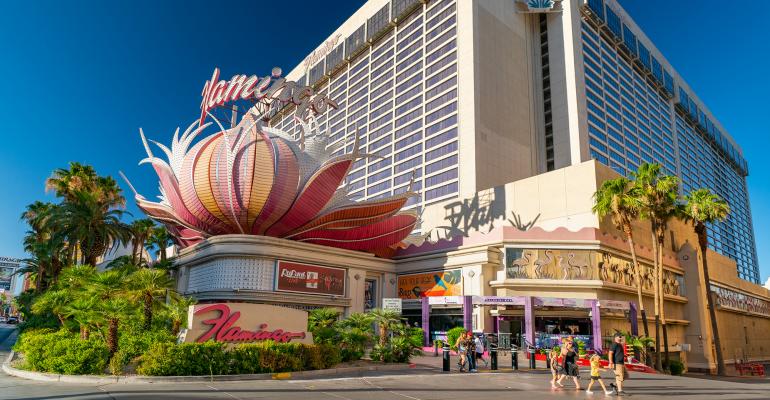 Some potential buyers have already passed on the property. The casino has been offered to private equity firms and other operators.

(Bloomberg)—Caesars Entertainment Inc. is seeking a buyer for its Flamingo casino in Las Vegas at a price of more than $1 billion, according to people with knowledge of the matter.

Some potential buyers have already passed on the property, according to the people, who asked not to be identified because the deliberations are private. The casino has been offered to private equity firms and other operators, some of whom have been reluctant to buy an older property that needs a lot of maintenance.

Another issue is that the Flamingo would likely lose a lot of business when separated from the Caesars customer loyalty program.

Caesars has said it wants to sell one of its casinos on the Las Vegas Strip as part of an effort to reduce debt. The company started the sale process earlier this year and expects to complete it by mid-summer, Chief Executive Officer Tom Reeg said on a conference call with investors Tuesday. Caesars had $13.5 billion in net debt at the end of the first quarter.

“When you get a lot of lawyers involved, the work extends to whatever the maximum allowable deadline is,” Reeg said. “So if we finish one day ahead of that six months, I’d be very pleased.”

The 3,450-room Flamingo is one of the Strip’s oldest properties. It originally opened in 1946 at cost of $6 million under the direction of gangster Bugsy Siegel.

Vici Properties Inc., a real estate investment trust that owns a number of Caesars properties, has a right of first refusal on the sale of several Caesars casinos, including the Flamingo, a deal that complicates the sale process somewhat.

Caesars considered selling Planet Hollywood further down the Strip but decided to keep that property so it can continue using its theater for concerts, one of the people said.