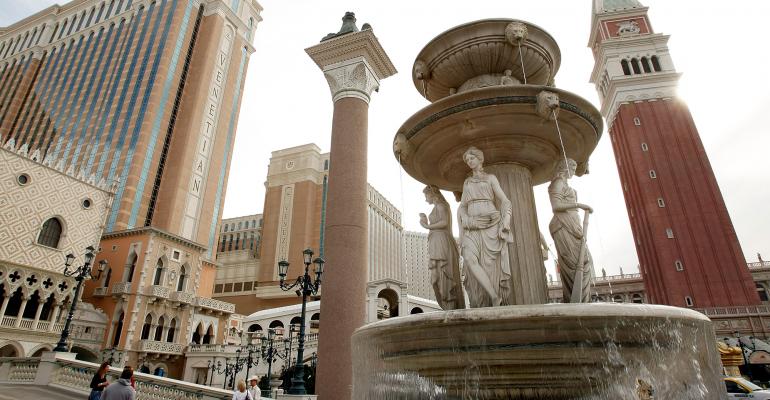 (Bloomberg)—The theater where Tony Bennett and Steely Dan once performed is still dark. Players at the blackjack tables are separated by plastic partitions. The gondoliers offering rides along faux canals wear face masks and aren’t allowed to sing.

The Venetian Las Vegas isn’t the resort it was a year ago. But that didn’t stop Apollo Global Management Inc. and its real estate partner, Vici Properties Inc., from plunking down $6.25 billion to purchase the property, the neighboring Palazzo and the adjacent Sands Expo Convention Center from Las Vegas Sands Corp. last week. The deal surprised observers such as Stephen Miller, director of the Center for Business and Economic Research at the University of Las Vegas, Nevada.

“Are they off their nut or are they on to something?” he asked.

Despite a long list of problems, Apollo partner Alex van Hoek sees opportunity -- for soaring tourism and a return of convention travel that made the city one of the top destinations for business groups.

“We are very bullish on the recovery of Las Vegas,” said van Hoek, who led the investment firm’s purchase.

It’s no sure thing. A year after the coronavirus shut down its famous casinos, America’s gambling capital is trying to crawl back from one of its deepest slumps ever. The glittering palaces along the Strip began reopening last June, but business is still slow. Unemployment, at 10%, is the highest among big U.S. cities. Tourist traffic in January slumped almost two-thirds from last year. Gambling revenue on the Strip was off 44% and the convention business nonexistent.

The recently passed stimulus, along with a lot of pent-up demand, should spur consumers and businesses to begin spending again, van Hoek said in an interview. While large numbers of Americans have gotten used to working from home, they won’t always stay there. Business meetings at Sands averaged 1,500 people in 2019 -- too big a crowd for a Zoom call -- and 2022 group bookings are already looking strong.

“Workforces are eager to gather and they understand the importance of getting together,” van Hoek said, arguing “large in-person meetings” will be even more relevant.

Apollo’s casino bets haven’t always paid off. The firm’s 2008 purchase of Harrah’s, now Caesars Entertainment Inc., for $30.7 billion with TPG led to years of restructuring, a bankruptcy and losses.

But this time, Apollo managers think they’re buying more at the bottom than the top, with a new Roaring ’20s set to dawn. The Las Vegas properties had adjusted earnings of $487 million on revenue of $1.82 billion in 2019. And as part of the deal, Sands provided $1.2 billion in seller financing. Apollo manages more than $450 billion in assets.

Meanwhile, the city is coming back to life. Last week, MGM Resorts International brought the last three of its resorts back to seven-day-a-week operations. Caesars Palace reopened its Omnia nightclub, with revelers out on the terrace rather than sweating inside in the disco. And Genting Group’s Resorts World, which plans to open a new $4.3 billion casino on the Strip this summer, said about 50,000 people applied for 6,000 spots.

Nevada Governor Steve Sisolak is relaxing curbs on shows, allowing performers to stay six feet from guests while wearing a mask, or 12 feet without masks. By March 15, most businesses will be allowed to operate at 50% of capacity, with gatherings of up to 250 people also permitted.

That’s a step toward a return of the meetings and conventions business, which welcomed 6.65 million guests in 2019 and was in expansion mode when the pandemic struck. Caesars opened a new $375 million convention center the same week that Las Vegas shut down last March, and the local tourist authority just finished a $989 million addition to its facility.

In the mall adjacent to the Venetian, Buddy V’s Ristorante is back open seven days week, recalling most of its staff for brunch and lunch, according to Elizabeth Blau, co-owner. She’s also re-engaged her social-media team to lure back guests. But what’s really missing are the weekday conventioneers who regularly order the $45 extra-large veal chop or the warm Nutella cake with salted caramel ice cream. Business tumbled 75% during the pandemic.

“It was utterly traumatic,” Blau said.

Gambling revenue shows that other parts of the city, including downtown and the suburbs, are faring better than the Strip, helped by a younger, local demographic that continues to come out and play.

Excluding four closed properties, Red Rock Resorts Inc., an operator of casinos popular with Las Vegas residents, had its most profitable quarter ever in the city, thanks in part to savings associated with fewer amenities, like buffets.

The reality is that even before Covid-19, Las Vegas tourism had hit a plateau of roughly 42 million visitors annually. Gambling has proliferated across the U.S., and more states are authorizing the expansion of traditional casinos, betting shops in stadiums and online gambling.

As it always has, Las Vegas has been looking to reinvent itself. In recent years, the city has attracted two professional sports teams to the new T-Mobile Arena and Allegiant Stadium, both within walking distance from the Strip. Media companies and casino operators have opened TV studios to broadcast from the city, including ESPN, which airs shows from its perch at Caesars’ Linq Hotel. Their target: sports gamblers.

John Payne, president of Vici Properties, the real estate investment trust that put $4 billion into the Venetian deal, said people once thought that the growth of ESPN would kill attendance at live sporting events. Now he figures the growth of sports gambling will bring more people to the betting capital.

Years ago, Payne told Sands executives that if they ever wanted to sell, he’d be interested. This week, Vici’s offering of $2 billion in shares to help pay for the deal was oversubscribed.

“People were more than excited about this,” he said. “It’s such an irreplaceable iconic asset.”

But Payne did negotiate one Covid-related backstop. If for some reason Apollo, which will operate the Venetian, can’t make its $250 million annual rent payment to Vici over the next three years, Sands will make up the difference.